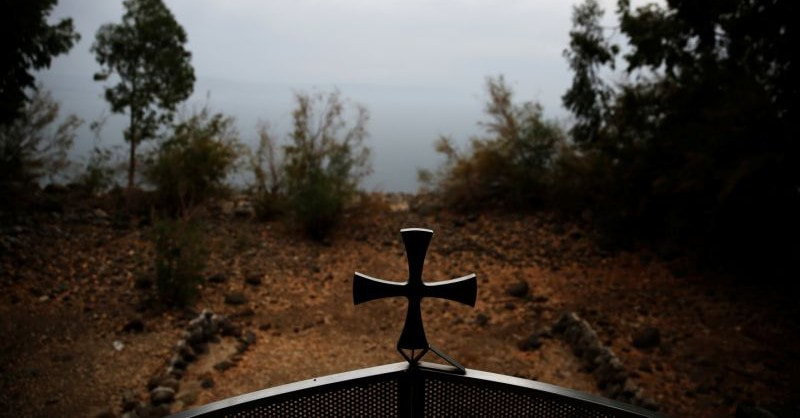 Archaeologists digging in modern-day Israel believe they have found the settlement where three of Yeshua’s apostles made their homes. The remains of a settlement discovered by the sea of Galilee in the Bethsaida Valley Nature Reserve is thought to be the site of the lost Roman city of Julias. The researchers believe the discovery of an advanced Roman-style bathhouse on the site indicates the existence of a city. They agree that this discovery makes the site in question the most likely to be Julias out of three possible sites in the area. The Jewish historian Josephus Flavius wrote that King Philip Herod, son of the biblical King Herod, transformed a settlement in the area called Bethsaida into a significant Roman city, which he called Julias after Julia Augusta, mother of the Roman Emperor Tiberius. "Josephus reported that the king had upgraded Bethsaida from a village into a polis, a proper city," said Dr. Mordechai Aviam of Kinneret College. The bathhouse attests to the existence of urban culture." In the gospel of John it names Philip, Andrew and Peter among Yeshua’s followers as being from the town of Bethsaida. Byzantine ruins had already been recorded at the site, but the archaeologists have discovered an older Roman layer beneath them, 211 meters below sea level, containing pottery sheds and a mosaic as well as the bathhouse. Two coins were also discovered in the Roman layer; a bronze coin dating from the end of the 2nd century and a silver one depicting the Emperor Nero and likely dating back to 65-66 A.D. (Newsweek)

ISRAEL HAS STRIPPED CITIZENSHIP FROM AN ARAB ISRAELI FOR THE FIRST TIME:

Israel has stripped an Arab Israeli man of citizenship, claiming he "removed himself from society" by launching a car-and-knife rampage that left four people injured in Oct. 2015. A judge said the move was a “suitable and proportional” response after Zayoud ploughed a car into a female Israeli soldier before stabbing three civilians near Kibbutz Gan Shmuel, northeast of Hadera. Zayoud was convicted of four counts of attempted murder and sentenced to 25 years in jail following the "nationalistically motivated" attack, which came during a spate of stabbings and shootings in Israel. The government's Interior Minister, Aryeh Deri, asked Haifa Magistrates' Court to revoke his citizenship following sentencing in June last year. On 6 August 2017 the court's deputy president Avraham Elyakim agreed to the request. “For every citizen, alongside his rights, there are commitments,” he said. “One of them is the significant and important commitment to maintain loyalty to the state, which is given expression also in the commitment to not carry out terror acts to harm its residents and their security. We cannot allow an Israeli citizen to impact the lives and dignity of other Israeli citizens and whoever decides to do so in acts of terror, removes himself from the general society of the country." (Independent)

Security comes before freedom of expression, Communications Minister Ayoub Kara said Sunday 6 August 2017, laying out a five-point plan backed by PM Netanyahu to shut down Qatari cable network Al Jazeera. Kara said Al Jazeera should be banned from broadcasting from Israel on grounds of incitement. “I want to make clear: Our citizens’ security and welfare overcomes freedom of expression in times of terror, period. Freedom of expression is not freedom to incite,” Kara said at a press conference. Kara asked the Government Press Office to revoke Al Jazeera reporters’ press cards. He also spoke to the cable and satellite television companies in Israel, which he said expressed willingness to stop broadcasting Al Jazeera. In addition, Kara asked Defense Minister Avigdor Liberman to use his authority to close down the network’s Israeli offices, and asked for the channel’s broadcasts on open satellites, used by many Israeli Arabs, to be blocked. (J.Post)

Legal human rights organization Shurat Hadin, joined by 50 IDF reserve officers and soldiers, wrote to the Health Ministry and the National Transplant Center requesting that PA diplomat Saeb Erekat be removed from the waiting list for transplants in Israel due to the fact that Erekat has repeatedly slandered IDF soldiers, called for the boycott of the State of Israel, campaigned for sanctions against it, and led the BDS movement to isolate and harm the State of Israel. Sunday 6 August 2017, the media reported that an application had been filed on behalf of Saeb Erekat, a senior PA official, for a lung transplant in Israel. In Nov. 2010, Erekat wrote a letter praising the planner of then Minister Rechavam Ze'evi's assassination, and in December 2015 he paid a condolence visit to another family whose son carried out a shooting attack against IDF forces. In addition, Erekat is an enthusiastic supporter of the boycott movement against Israel - BDS. In a letter sent to the National Transplant Center, written by the Chairwoman of the Shurat-Din organization, Nitzana Darshan Leitner, it was stated: "It is unthinkable that anyone who defames Israeli citizens and commits blood libel against IDF soldiers receive a donation from these very civilians or soldiers. It is also inconceivable that anyone who calls for to boycott the State of Israel, initiates propaganda for sanctions against it, and leads the BDS movement to isolate and harm the State of Israel, now seeks the assistance of that same State of Israel when he needs it. The very submission of this request is totally outrageous. Saeb Erekat carries on his neck an albatross of despicable slander against Israeli citizens, supporting the murderers who attack them. These are the citizens of Israel he is now asking for a lung.” (INN)

ISRAELI, GERMAN LAWMAKERS CALL FOR HEZBOLLAH TO BE BANNED FROM GERMANY:

Terrorist groups must not be allowed to hold events in Germany, members of the Knesset and the Bundestag wrote in a letter to German Interior Minister Thomas de Maizière. “It is unacceptable that terrorist organizations in Germany are planning events and recruiting supporters while the responsible authorities do not have any legal tools to prevent it.” The letter, spearheaded by Yesh Atid chairman Yair Lapid, came after an “al-Quds Day” march in June 2017 in which participants marched with Hezbollah flags and Israeli flags with the Star of David crossed out, and touted messages like “Zionists out of Israel.” Lapid wrote to Berlin Mayor Michael Müller, was unsatisfied with his response, and asked Volker Beck, head of the Germany-Israel Parliamentary Friendship Group, to write a letter with him. Five Israeli MKs and six German lawmakers signed the letter, which was sent last week. The parliamentarians pointed to the al-Quds Day march and events organized in support of the Popular Front for the Liberation of Palestine in Berlin, saying that both the PFLP and Hezbollah are designated terrorist organizations by the EU, who can't be allowed to organize, recruit supporters and fund raise in Europe,” Lapid said Monday 7 August 2017. “Israel needs to work with countries across the world to cut off funding to terror groups, because the money they raise abroad is used to kill Israelis at home. Lawmakers called on de Maizière to ensure that Hezbollah, PFLP and other terrorist organizations will be banned and their activities be totally prohibited in Germany. (J Post)

The downfall of ISIS could be a boon for Iran, former USA Secretary of State Henry Kissinger cautioned in an article published this week. In the Middle East, four states - Syria, Iraq, Libya, and Yemen - have ceased to function as sovereign and have become battlegrounds for factions seeking to impose their rule. Across large areas of Iraq and Syria, an ideologically radical religious army, ISIS, has declared itself a relentless foe of modern civilization, seeking violently to replace the international system's multiplicity of states with a single Islamic empire governed by Sharia law. Which entity is supposed to inherit ISIS' territory - a coalition of Sunnis or a sphere of influence dominated by Iran? If the ISIS territory is occupied by Iran's Revolutionary Guards or Shia forces trained and directed by it, the result could be a territorial belt reaching from Tehran to Beirut, which could mark the emergence of an Iranian radical empire. (Algemeiner)

USA TO INVEST 432 MILLION MORE IN ISRAELI BURN TREATMENT:
​
The USA government's Biomedical Advanced R&D Authority (BARDA) will inject $32 million more into developing the Israeli company MediWound's burns treatments, after previously investing $100 million. MediWound's products are designed for the removal of dead tissue in burns and hard-to-heal wounds. The product is produced from the pineapple plant and removes 100% of the dead tissue with no harm to healthy tissue. MediWound founder Prof. Lior Rosenberg, a former chairman of the International Society for Burn Injuries disaster committee, said, "The current management of pediatric burns requires intensive medical therapy and several traumatic surgical procedures. MediWound is aiming to replace the traumatic conventional treatments for burns." (Globes)