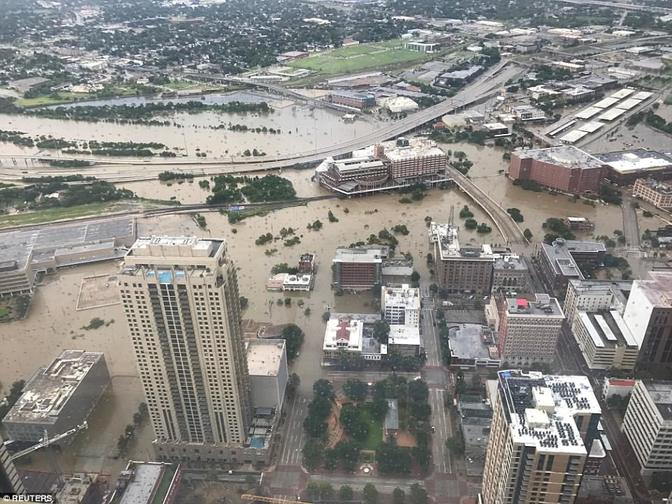 THOUSANDS ARE STRANDED ON ROOFTOPS IN FLOODED HOUSTON:

Thousands of people are trapped on their rooftops in flooded Houston and are desperately pleading for help after Hurricane Harvey has left much of America's fourth largest city underwater. Many residents have turned to social media with heart-breaking pleas for help as the Houston police department asked any civilians with boats to join them and assist with the more than 6,000 calls for rescues. The storm has already dumped a historic 11 trillion gallons of water on Texas - with another 27 inches of rain falling so far and another 23 inches expected to come within the next few days. Experts said the aftermath of the catastrophic hurricane could equal the level of destruction of Katrina in 2005. The storm has claimed the lives at least five people and the Federal Emergency Management Agency, revealed it would take the area years to recover from the storm which is the worst this decade. (UK Dailymail)

SENTIMENT IS USA CONGRESS TENDING AWAY FROM ‘TWO-STATE SOLUTION’:

The Jerusalem Post on 27 August 2017 reported a growing tendency among key United States congressman to look beyond the accustomed two-state solution for a Middle East peace model. The USA-Israel Education Association sponsored a week-long fact-finding mission that included five Congressmen and one Senator. Rep. Mac Thornberry (R-TX), who participated in the mission, said, “There is a sense in Congress that it is maybe time to look a little broader outside the box at alternative solutions to the Israel-Arab conflict.” During last week's trip, the delegation spent much of a day in the Samarian city of Ariel, visited the Jewish Community of Hebron, and met with PM Netanyahu. “My view is that some of the assumptions that we have all operated under for a long time – that there has to be a two-state solution, a Palestinian state in Judea & Samaria– some of those assumptions are now being questioned,” said Thornberry. "You can’t do the same thing over and over again” and expect a different outcome.

Senator James Lankford (R-Oklahoma), a member of the Senate Intelligence Committee who also participated in the mission, cautioned that Israeli-Palestinian Arab peace will not occur as a result of superficial diplomacy, but will require a “longer-term generational shift.” Lankford’s describes his strategy as a process continuing “one bite at a time, rather than with one big agreement.” Rep. Steve Russell (R-Oklahoma), a highly decorated 21-year USA Army veteran who has seen action in Kosovo, Kuwait, Afghanistan, and Iraq, explained that “you have really three options when two groups don’t get along. You have accommodation, which is the ultimate goal; you have assimilation, where the stronger side forces the hand of the weaker, and then they accept it; and you have elimination, when neither side want to agree and are determined to eliminate the other.” Russell called those three options “the path of history . From my perspective, you have Israel, which is willing to do the first two stages – accommodation and assimilation – but have never looked at the third category as a solution. For "the other side," however, Russell said, "the first and only option is elimination.” (Arutz-7)

‘AN IMPORTANT PRECEDENT IN THE FIGHT AGAINST TERRORISM’:

The military court in Judea on 27 August 2017 convicted five members of the family of Omar al-Abed, the terrorist who stabbed three members of the same family to death in the town of Halamish last month. The five were convicted of failing to prevent an offense, because they knew of his intention to carry out the attack and did not inform the security authorities in order to prevent the violence and save innocent lives. The terrorist's uncle and two brothers were sentenced to eight months in prison. The terrorist's father was sentenced to two months in prison. The terrorist's mother, who was convicted on charges of incitement for praising her son's act of murder, was sentenced to one month in prison and forced to pay a fine. IDF officials said that "the conviction of the family members for the offense of not preventing offenses under these circumstances is a significant precedent in the struggle against terrorism. In addition, the various punishments of family members are derived from the extent of their involvement and the length of time they knew of the intention to carry out an attack." (Arutz-7)

The Frankfurt City Council approved a bill introduced by the mayor to bar the use of city funds and venues for the Boycott, Divestment and Sanctions movement against Israel. Friday’s 25 August 2017 decision brings the council one step closer to outlawing BDS, which Mayor Uwe Becker has described as “deeply anti-Semitic.” The bill now needs approval from the city legislature. BDS activists have consistently rejected claims that they are motivated by anti-Semitism. The BDS movement says its actions are a reaction to Israel’s alleged violations of international law against Palestinians. The City Council decided that no municipal venues or outdoor areas will be provided for activities of the BDS, and any organization that does provide support for BDS risks losing city funding. Becker said the BDS movement uses anti-Zionism as a vehicle for an anti-Semitic agenda. BDS is not about resolving the conflict, he said, but “essentially about delegitimizing the State of Israel, using the tools of boycotts and defamation.” Becker decried the actions of “self-appointed ‘department store police’ who attach labels to Israeli products in order to intimidate retailers, who try to intimidate artists who perform in Israel, and who disturb events.” The mayor accused the BDS movement of using “the same language that National Socialists once employed to say ‘Don’t buy from Jews!'” (JTA)

CANADA TO DONATE $25 MILLION TO UNRWA:

Canada announced on 24 August 2017, it will donate up to $25 million to the United Nations Relief and Works (UNRWA) which helps so-called “Palestinian refugees”, said its Minister of International Development and Marie-Claude Bibeau. B'nai Brith Canada expressed concerns over the move, saying it would share those concerns with the Canadian government. Canada’s renewed engagement is part of our long-standing commitment to a more peaceful and stable region," Bibeau said last week. UNRWA was documented storing Hamas rockets and weapons "designed to kill Israeli citizens" in its schools, a fact which the UNRWA chief admitted himself. The organization has actively taken part in inciting anti-Semitic violence.

The previous Canadian government, headed by Stephen Harper, stopped the funding to UNRWA, but the current Liberal government, headed by PM Justin Trudeau, announced several months ago it would restore the funding. B'nai Brith Canada said following Thursday's announcement that it continues to have serious concerns about UNRWA. "Helping impoverished Palestinians in various Arab countries is certainly a positive act,” said Michael Mostyn, Chief Executive Officer of B'nai Brith Canada. "However, according to a new report, UNWRA continues to facilitate anti-Semitism and the demonization of Israel. UNWRA's highly-politicized environment actually obstructs the best possible service to the Palestinians." (INN)
​UNRWA, with its $1.3 billion budget (30% of which comes from USA taxpayers), actually perpetuates the refugee problem it was created to solve, while promoting Palestinian rejectionism and Jew hatred. The original 700,000 Palestinians leaving Israel have now been magically transformed into over 5.6 million "refugees" registered with UNRWA, about half of all the Palestinians living in the world today. The "temporary" UN agency has developed into a bloated bureaucracy with a staff of 30,000, almost all of who are Palestinians (many are activists of Hamas, the Islamist terrorist group). Less than 5% of UNRWA's clients ever lived in Israel, but the agency's regulations state that all descendants of the original displaced persons shall retain their refugee rights in perpetuity.

Several artists pulled out of a popular Berlin music festival because the Israeli Embassy in Germany provided a financial contribution. The three-day Berlin Pop-Kultur festival accepted 500 euros, or nearly $600, from the Israeli diplomatic mission. American musician Thurston Moore, a former member of Sonic Youth, called on the festival to cancel the Israeli Embassy sponsorship “in solidarity with the Palestinian call for cultural boycott,” according to Electronic Intifada. Artists who pulled out of the festival over the embassy sponsorship include the Finnish black metal band Oranssi Pazuzu and the British musician Annie Goh. (JTA)