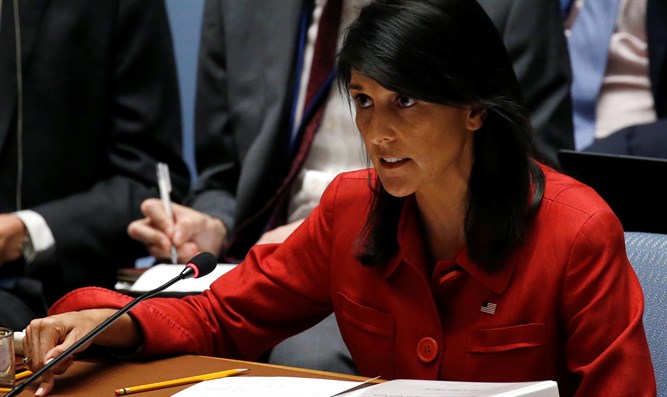 USA Ambassador to the United Nations Nikki Haley responded Tues. 15 Aug. 2017, to threats by Iranian President Hassan Rouhani, who said his country would withdraw from the 2015 nuclear deal if the USA imposes new sanctions on it. "Iran cannot be allowed to use the nuclear deal to hold the world hostage. The nuclear deal must not become 'too big to fail,'" Haley said. She called for Iran to be held responsible for "its missile launches, support for terrorism, disregard for human rights, and violations of UN Security Council resolutions." Rouhani had earlier blasted plans by the United States to impose new sanctions on the Tehran regime, declaring Iran’s nuclear program could be restarted in a matter of “hours,” if the American government did so. While lifting nuclear-linked sanctions, the United States maintains sanctions related to Iran's ballistic missile program, human rights record and its support for international terrorism. Earlier this month, President Trump signed a new package of sanctions into law targeting not only Iran, but North Korea and the Russian government as well. Within hours, Iran’s Foreign Ministry condemned the new measures and vowed an “appropriate and proportional response”. Haley is set to travel to Vienna later this month to discuss Iran's nuclear activities with officials from the UN’s International Atomic Energy Agency. (Arutz-7)

Israeli television reported on Tues. 15 Aug. 2017 that Iran is creating a facility in northern Syria to build long-range missiles. It broadcast satellite photographs of a plant under construction just west of the Mediterranean coastal town of Banyass and compared it to shots of another facility - one located near the Iranian capital of Tehran - that is nearly identical to the new one. The latest imagery fuels the ongoing argument over the 2015 Iranian nuclear deal which Tehran insists is not violated by the new facility while the Trump administration is actively adding new sanctions against Iran. The new plant is expected to be the chief topic of discussion when senior Israeli intelligence officers meet with their counterparts in Washington this week. Addressing the American moves, Iranian PresidentHassan Rouhani warned on Tuesday that his nation’s nuclear program can be put back on track in no time at all - “in an hour and a day” - and at a more advanced level than before if the USA continues to impose sanctions. (Medialine)

NETANYAHU TO INTRODUCE LAW MAKING IT EASIER TO DECLARE WAR:

PM Benjamin Netanyahu is promoting a legal amendment that would give him more leeway to declare war without consulting the full cabinet, Israel’s Channel Two reported this week. The report said Netanyahu intends to introduce legislation to the Knesset after the summer recess that would allow him to declare war - or a military operation that could trigger a war - without the prior authorization of the entire cabinet, but rather just the security cabinet. Netanyahu reportedly covets the change, which would require amending one of Israel's Basic Laws, in order to prevent leaks from the full cabinet. The station reported that Justice Ministry officials advised that such an amendment would prevent leaks - and potential operational damage - by restricting debate ahead of the launch of a military strike. (i24)
MAHMOUD ABBAS CONGRATULATES NORTH KOREA’S JONG-UN:
PA Chairman Mahmoud Abbas on Tues. 15 Aug. 2017, sent congratulations to the ruler of North Korea, Kim Jong-un, in honor of the country's Liberation Day. Abbas wished Jong-un "all health and happiness." His greetings did not mention the international tension following Jong-un's threat to fire missiles toward the USA Pacific territory of Guam in honor of Korea's Liberation Day. Abbas wished "the Korean people continued stability and prosperity; and that the historical friendly relations between Palestine and North Korea and their two peoples will continue to develop and grow." Abbas’ warm and fuzzy message sent to the Korean dictator has stirred up new ill feelings between Israelis and Palestinians. In the message, Abbas also noted Pyong Yang’s support for the Palestinian goal of statehood with Jerusalem as its capital. (PMW)

UNRWA CLOSES HAMAS TUNNEL DETECTED BENEATH TWO OF ITS GAZA SCHOOLS:
​
UNRWA announced 14 August 2017 it had sealed a Hamas terrorist tunnel found two months ago under two of its schools in the Gaza Strip. UNRWA spokesman Chris Gunnessconfirmed UNRWA had closed the tunnel, which it discovered at the beginning of June after the Maghazi Elementary Boys A&B School and the Maghaz Preparatory Boys School had been closed for the summer. “UNRWA can confirm that the tunnel has no entry or exit points on the premises nor is it connected to the schools or other buildings in any way." Gunness stated further that UNRWA condemns the existence of such tunnels in the strongest possible terms. It is unacceptable that students and staff are placed at risk in such a way. The sanctity and neutrality of UN premises must be preserved at all times,” Gunness wrote. (J.Post)
SWITZERLAND DECRIES ANTI-SEMITISM AFTER FUROR OVER HOTEL SIGN:
The Paradies apartment hotel in the Alpine village of Arosa in eastern Switzerland has been under fire for alleged anti-Semitism after an outraged guest posted to Facebook a picture of a notice plastered outside the hotel pool. “To our Jewish Guests, women, men and children, please take a shower before you go swimming,” it said, adding that “If you break the rules I’m forced to close the swimming pool for you.” A second notice, in the kitchen, meanwhile instructed “Our Jewish guests” that they could only access the facility’s freezer between 10 and 11 a.m. and between 4:30 and 5:30 p.m. “I hope you understand that our team does not like being disturbed all the time,” it said. The story quickly made the rounds on social media and was published by Israeli papers, prompting a harsh reaction from Israeli officials.

MK Tzipi Livni posted an image of the sign on her Facebook page and wrote that “there can be no tolerance and no indifference” to anti-Semitism and racism. We “must not let there be a place in the free world for Nazi flags or Ku Klux Klan masks or ugly signs in hotels directed at Jews only,” she wrote. The signs were removed and Swiss foreign ministry spokesman Tilman Renz said that the ministry had been in contact with Israeli Ambassador to Switzerland JacobKeidar and had “outlined to him that Switzerland condemns racism, anti-Semitism and discrimination in any form.” (Times of Israel)

The influx of Chinese students at Israeli universities has been growing steadily in recent years. On the forefront of this enrollment boom is the University of Haifa, which currently boasts some 200 Chinese students among its student body, compared to 20 in 2013, representing a 1,000% increase. University of Haifa president Ron Robin welcomes the addition. “The cooperation with strategic partners from Chinese industry and academia serves the strategic goals of the university,” said Robin. “As such, we welcome all the Chinese students to Israel, and intend to continue to deepen the ties and cooperation with the Chinese academy.” This past March, PM Netanyahu and Economy Minister Eli Cohen were present when Robin, along with the Hangzhou Wahaha Group and the Institute of Automation at the Chinese Academy of Sciences, signed a $10-million deal that finalized the construction of three Israeli-Chinese artificial intelligence technology centers in Haifa, Hangzhou and Beijing. (J.Post)

ISRAEL SENDS AID TO DISASTER-HIT SIERRA LEONE:
​
Israel’s PM Netanyahu instructed the Foreign Ministry on 14 August 2017 to extend immediate humanitarian aid to Sierra Leone, the west African country reeling under devastating mudslides and torrential flooding that killed more than 300 people outside the capital of Freetown. The aid – clean water, medicine and blanket – will be distributed through Israel's embassy in Senegal. Israel does not have an embassy in Freetown. Untold numbers of people are feared buried alive in their homes by the mudslides, and an estimated 3,000 people have been left homeless. Israel has rendered assistance to Sierra Leone in the past, sending a field hospital and staff there in 2014 to help fight the Ebola epidemic, which claimed some 4,000 lives in the country. At the time Israel also contributed $10 million to the Ebola aid fund, the sixth-largest contribution in the world. (J.Post)