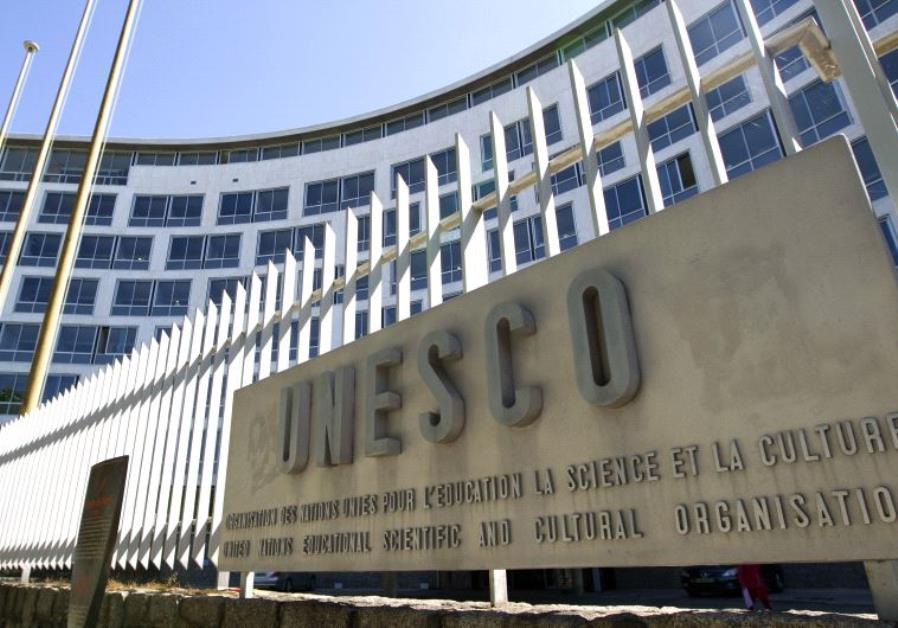 The Trump administration announced on Thurs.12 Oct. 2017 that the USA will withdraw from UNESCO, the UN's educational, scientific and cultural body. The Paris-based body is known for designating World Heritage sites like the ancient city of Palmyra in Syria and Grand Canyon National Park, but it has struggled for relevance as it becomes increasingly hobbled by regional rivalries and a lack of money. A fight over who will next run the organization highlighted the Trump administration's concerns: one leading candidate, Qatar’s Hamad bin Abdulaziz al-Kawari, has been openly accused of anti-Semitism by Jewish and Israeli groups. "This decision was not taken lightly, and reflects USA concerns with mounting arrears at UNESCO, the need for fundamental reform in the organization, and continuing anti-Israel bias at UNESCO," the State Department said. "I wish to express profound regret at the decision of the United States of America to withdraw from UNESCO," said Irina Bokova, Director-General of UNESCO, in response to the USA decision. "Universality is critical to UNESCO’s mission to strengthen international peace and security in the face of hatred and violence, to defend human rights and dignity." Bokova did not address Israel or anti-Semitism - part of the reason for the American exit from the organization. In recent months, UNESCO members have pushed the body to recognize Jerusalem as a holy site exclusive to Muslims, without recognizing its Jewish roots. Trump administration officials such as Nikki Haley, its UN ambassador, have warned for weeks that pulling out would be a possibility if the body fails to reform. (Reuters)

PM Netanyahu announced Thurs. 12 Oct. 2017 that Israel will be exiting the United Nations Educational, Scientific and Cultural Organization (UNESCO) over the organization’s anti-Israeli bias, following a similar announcement by the Trump administration. The leading contender for the post of head of UNESCO is a Qatari delegate. The Simon Wiesenthal Center protested the choice, writing that candidate Hamad bin Abdulaziz Al-Kawari has repeatedly endorsed anti-Semitic works and denied Jewish connection to Jerusalem. Earlier this year, UNESCO declared the ancient city of Hebron, King David’s first capital and home to the tomb of the biblical patriarchs, an endangered Palestinian heritage site. Last year, UNESCO passed resolutions declaring that Israel has no rights to Jerusalem, and described the Temple Mount and Old City of Jerusalem as Muslim holy sites.
The Prime Minister instructed the Foreign Ministry to prepare Israel's withdrawal from the organization alongside the United States. Netanyahu added that he "welcomes the decision by President Trump to withdraw from UNESCO. This is a courageous and moral decision because UNESCO has become the theater of the absurd and because instead of preserving history it distorts it." The USA decision to leave the UN’s cultural body was met with praise from Israel’s coalition and opposition politicians alike, citing UNESCO’S 'anti-Israel bias'. Israel’s Deputy Foreign Minister Tzipi Hotovely said that "the important decision taken by the USA regarding UNESCO demonstrates a determined struggle against the industry of lies. UNESCO lost its moral mandate with a string of absurd resolutions which distorted history and its time it paid the price." (Artuz-7)

DANNON TO UNESCO: ‘THERE IS A PRICE TO PAY FOR DISCRIMINATION AGAINST ISRAEL:

Israeli Ambassador to the United Nations Danny Danon praised the Trump administration’s decision to pull the USA out of a UN organization responsible for a series of high-profile anti-Israel resolutions in recent years. “UNESCO has become a battlefield for Israel bashing and has disregarded its true role and purpose. Today’s decision is a turning point for UNESCO. The organization’s absurd and shameful resolutions against Israel have consequences. Today is a new day at the UN, where there is price to pay for discrimination against Israel.” Danon added: “The United States stands by Israel and is a true leader for change at the UN. The alliance between our two countries is stronger than ever." (INN)

‘THERE CANNOT BE 1 LAW FOR ISRAEL AND 1 FOR THE REST OF THE WORLD’:
​
Professor Eugene Kontorovich, Director of International Law at the Kohelet Policy Forum, responded to the decision of the Trump administration to pull the USA out of the UNESCO world heritage organization. "The USA has quit UNESCO over its long history of anti-Semitic resolutions, culminating its denial of Jerusalem and Hebron's Jewish history. That is particularly welcome move by the USA” said Prof. Kontorovich. He predicted that the administration would pull out of other UN bodies if they continued to display their anti-Israel bias. "Also, if the USA quits UNESCO over purely symbolic resolutions, it is quite likely to quit UNHRC in a few months when it actually begins blacklisting American companies for their ties to Israel. The days of applying a double standard to Israel seem to be coming to an end. There cannot be one international law applied to Israel and another for the rest of the world." (Arutz-7)

Israel’s Internal Security Minister, Gilad Erdan praised the Trump administration’s announcement on 12 Oct. 2017 that the USA will be leaving UNESCO, following the organization’s passage of multiple resolutions against the Jewish state. “The USA decision to leave UNESCO is just, and shows the depth of the USA-Israel friendship,” Erdan tweeted. Erdan warned that UNESCO was not the only UN body serving as a de facto anti-Israel lobby, and called for the USA and Israel to put the international organization on notice that pro-BDS actions by the UN would lead both countries to withhold all funding of the UN. “Now is the time to officially announce that if the UN publishes a blacklist of companies that operate in Judea and Samaria, the USA and Israel will cut off all funding. The UN is turning itself into an anti-Israel delegitimization and BDS organization, and there is no reason American and Israeli taxpayers should foot the bill.” (Arutz-7)

Hezbollah terrorists have entered Germany since mid-2015 as part of the wave of refugees from the Middle East, according to a German intelligence report. The report released this month shows increased membership for Hezbollah in the German state of North Rhine-Westphalia. North Rhine-Westphalia is home to the Imam-Mahdi Center in the city of Münster, which is a meeting place for Hezbollah members, according to the report. Additional cities where Hezbollah is active in North Rhine-Westphalia are Essen, Bottrop, Dortmund and Bad Oeynhausen, it continued. According to Germany’s federal intelligence agency, there are 950 active Hezbollah operatives in the Federal Republic. USA Canada, Israel and the Netherlands classify Hezbollah as a terrorist organization. The intelligence document noted that Hezbollah’s goal is the “destruction of the State of Israel as well as Islamic domination over Jerusalem.” (J.Post)

Palestinian negotiators from rival Hamas and Fatah factions signed a reconciliation deal on Thurs. 12 Oct 2017, ending a decade-long split following talks mediated by Egypt in Cairo, with Palestinian Authority President Mahmoud Abbas calling it a “final” accord. Under the agreement, the Judea & Samaria-based Palestinian Authority is to resume full control of the Hamas-controlled Gaza Strip by 1 Dec. 2017. Hamas was not prepared to disarm. The Islamist terror group was said to have instead agreed, under the terms of the emerging reconciliation deal, that it would not use its weaponry unless a resort to force was approved by a joint panel. The deal was signed in Cairo by new Hamas deputy leader Saleh Arouri and Azzam al-Ahmad, the head of the Fatah delegation for the talks, at the headquarters of Egypt’s intelligence service. Israel condemned the agreement, as it does not require Hamas first disarm. Israel has been clear that it would not enter negotiations for a peace agreement with Hamas, a terror organization that calls for Israel’s destruction. (Times of Israel)

​Beneath the facade of the so called “moderate” Palestinian Authority and Israel’s unrelenting enemy; the Hamas terrorist group with its ongoing violence against the Jewish state, kidnappings and terrorist tunnels, there is little difference. Regarding the “moderate” PA, little is said by Western leaders regarding ceremonies honoring terrorists, or hate-filled Palestinian text books and children’s television shows. Scant mention is made how ongoing evidence of malevolence in Palestinian governed Judea & Samaria society shatters trust in Israel that Palestinians have any plans for future Arab generations living side by side with them in harmony. Continue to pray for the Gospel to make a difference in the Middle East. Knowledge of Yeshua is the only hope for peace.

BENNETT: PALESTINIANS HAVE CHOSEN A TERROR GOVERNMENT:
​
Education Minister Naftali Bennett responded to the signing of the PA-Hamas conciliation agreement, stating that "the Palestinians have chosen today to establish a terror government. The person who signed the agreement was Saleh Arouri, who was behind the kidnapping and murder of the three Israeli youths in 2014. Mahmoud Abbas' joining up with Hamas turns the PA into a terror authority. The State of Israel must cut off all contact with this terror authority." (INN)