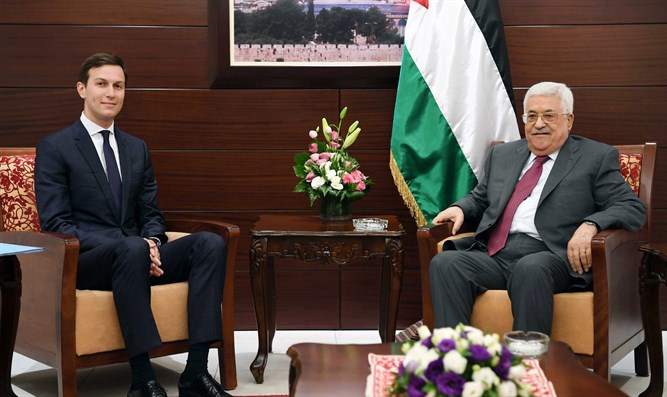 Palestinian Arab officials continued to express frustration on Friday 25 August 2017, over the fact the USA still has not committed to a two-state solution, even after a meeting described as productive between President Donald Trump’s senior adviser, Jared Kushner, and the Palestinian Authority in Ramallah the previous day. “We have clearly emphasized to the Americans the importance of having a public statement that has a commitment to the two-state solution,” Ashraf Khatib, a spokesman for Palestine Liberation Organization (PLO), told media sources. “There hasn’t been any.” Even before the meeting, PA officials expressed pessimism that Washington's peace efforts could bear fruit. Ahmed Majdalani, a senior member of PLO which Abbas heads said, "Without a clear American commitment to the two-state solution and stopping settlements and ending the [so-called] occupation, we don't expect much from this administration," he added. (INN) A society, whose leaders persist in perpetrating hatred and lies against the Jewish state, can never be considered a peace partner with whom Israel can reasonably negotiate. PA run-schools and their textbooks continue to teach children to abhor the Jewish state and to promote its destruction. Terrorists who have murdered and maimed Israelis, including babies and children, are openly glorified as “heroes.” Intercede that changes will come from within the Palestinian society that result in softened hearts, educational and media shifts, and a true desire for good relations. In finality, the single solid hope for peace in the Middle East is for the good news of Yeshua to penetrate through Muslim strongholds.

USA: NO REASON TO FREEZE BUILDING IN JUDEA & SAMARIA:

The USA delegation headed by White House adviser Jared Kushner told Palestinian Authority Chairman Mahmoud Abbas that there is no reason to freeze building in Judea & Samaria. Abbas requested the USA pressure Israel to freeze Jewish building in Judea and Samaria. This, Abbas said, is one of the preconditions necessary for peace talks. Kushner, together with USA Special Middle East Envoy Jason Greenblatt, told Abbas they have no intention of requesting Israel freeze building. This, they explained is for two reasons: First, the talks must be held without preconditions. Second, Israel has compromised much for the sake of the PA, but the PA has not taken steps to build confidence and has, in fact, acted in the opposite manner. They also told Abbas that even though they believe the two-state solution is ideal, talks must be held without preconditions and the exact borders should be negotiated between the two sides. (INN)

Palestinian Authority Chairman Mahmoud Abbas told the United States last week that he will continue to pay terrorists' families for terror attacks against Jews. "I do not intend to cease paying salaries to the families of prisoners and martyrs, even if it means I lose my position," said Abbas. "I will continue paying their salaries until my dying day." USA Special Middle East Envoy Jason Greenblatt and White House adviser Jared Kushner on 24 August 2017 met Israeli PM Netanyahu in Jerusalem. Later, they met Abbas in his Ramallah headquarters. Abbas told the USA team that "we know things are complicated, but with effort and goodwill nothing is impossible. We appreciate President Trump's efforts, and the fact that he said he would work to make an historical peace agreement.” (Arutz-7) The truth of the matter is that on the part of the Palestinian Authority and it leader Mahmoud Abbas there is no “goodwill” towards Israel, and absolutely no historical or present “effort” to promote peace with the Jewish state.

Israel’s security services last month recorded 222 terrorist attacks against Israelis, the highest number in any month since December 2015. The attacks resulted in the killing of five Israelis, two soldiers and three civilians, and the wounding of seven, according to Israel Security Agency’s monthly report. The tally for July was more than double the 94 attacks recorded in June and nearly double the average of 121 attacks per month from January 2016 onward. Last month was among the deadliest in that period in terms of terrorist assault fatalities, second only to November 2015 when terrorists murdered 10 Israelis. The surge in attacks in July 2017 occurred after three Muslim terrorists murdered two Israeli policemen on the Temple Mount. In response, Israel placed metal detectors and additional security cameras at the Temple Mount entrances. These security measures prompted an outcry from the Palestinian Authority, the Jordanian Waqf and the Jordanian government, which demanded a return to the status quo. (INN)

Amjad Jabareen, a resident of Umm Al-Fahm in northern Israel, helped the three attackers from the same town who murdered two Israeli police officers on the Temple Mount in Jerusalem in July 2017. According to an indictment filed last week, Jabareen helped them plan the attack, hide weapons in a local mosque, and drove them to the bus that took them to Jerusalem. In preparation for the attack, the three terrorists practiced shooting near Umm Al-Fahm with Jabareen's help. He also drove them to the site and witnessed them checking out the security cameras. The Israel Security Agency noted that the submachine guns used for the attack were hidden in a closet in the Al-Malasaa Mosque in Umm Al-Fahm, where one of the attackers worked. The mosque is associated with the Northern Branch of ISIS which was outlawed in 2015. (Ha'aretz)

USA Ambassador to the United Nations Nikki Haley on Friday 25 August 2017 called for nuclear inspectors to be granted access to Iranian military bases. She urged the International Atomic Energy Agency (IAEA) to use all its authority to ensure Tehran’s compliance with the nuclear deal it signed with world powers in 2015. “I have good confidence in the IAEA, but they are dealing with a country that has a clear history of lying and pursuing covert nuclear programs,” Haley said after returning from a trip to Vienna, where the IAEA is based. ”We are encouraging the IAEA to use all the authorities they have and to pursue every angle possible “to verify compliance with the nuclear deal,” she added. Haley made her comments at the UN after returning from the visit to Vienna, where she met with IAEA as part of President Donald Trump’s review of the Iran nuclear deal made by former President Barack Obama. Trump has been a vocal critic of the Iran nuclear deal, describing it as “the worst deal I’ve ever seen negotiated”.
In her comments Friday, Haley also leveled harsh criticism at Irish Major General Michael Beary, the commander of UN forces in Lebanon (UNIFIL), accusing him of turning a blind eye to Iran’s covert arming of the Hezbollah terrorist group. ”General Beary says there are no Hezbollah weapons,” she said.” That’s an embarrassing lack of understanding on what’s going on around him. “Hezbollah openly brags about their weapons. They parade them before TV cameras. The secretary general’s reports have confirmed this. For the UNIFIL commander to deny it has any proof, shows that we need to have changes in UNIFIL,” Haley said. (Reuters)

It’s an operation that only takes one hour, but it allows hundreds of children to face the future with a smile. That’s the contribution of two plastic surgeons from the Rambam Medical Center in Haifa, who recently returned from Africa where they were on a mission to correct facial deformities in local children. Doctors Omri Emodi, a craniofacial surgeon, and Zach Sharony, a plastic surgeon, were working in Ghana on a mission organized by Operation Smile, a USA based humanitarian organization. Their patients ranged in age from a few months old to young men and women in their 20s. They came from all over Ghana, some as far as 500 miles away. Most of the operations were on cleft lips and palates, while others dealt with more complex surgeries on facial deformities The doctors worked non-stop in seven makeshift surgery rooms in the city of Ho, and completed 155 operations in eight days. (Times of Israel)

A MONKEY AND A CHICKEN HAVE BECOME BEST FRIENDS AT AN ISRAELI ZOO:
​
Over the past week, an Indonesian black macaque named Niv has become a close friend of a chicken at the Ramat Gan Safari Park near Tel Aviv. “Niv has had trouble finding a mate,” explained a zoo spokesman “so that is likely why she has taken the bird under her, um, wing. The Asian monkey has been hanging out with the chicken on a regular basis - holding it, caressing it and sleeping next to it at night. Niv had tried to “adopt” a different chicken a few months ago, but the bird wasn’t interested. The new adoptee could easily slip out of Niv’s cage, but chooses to stay. These interspecies relationships typically form with some help from human caretakers who introduce the animals to each other. But it isn’t clear where Niv’s chicken came from. What is clear is that these two buddies are inseparable and irresistibly cute. (JTA)