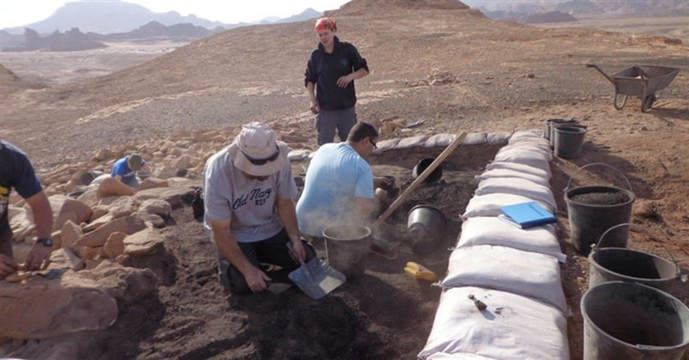 DOZENS OF SEALS FROM FIRST TEMPLE PERIOD FOUND IN JERUSALEM:

Several dozen seals and seal impressions from the First Temple period, many with biblical-type names in ancient Hebrew text, have been found in this year's excavations at the City of David, lending credence to the theory that Jerusalem was a major administrative capital of the Judean kingdom, say archaeologists exploring the site. When the Middle Eastern ancients wanted to secure a letter or notarized document with a seal, they used moist clay that would be imprinted with the seal. "Somewhere in the late 8th century BC, until 586 BC, seals started bearing names of the officials sealing the letters," explained Joe Uziel. "Jerusalem was the capital of the Judean monarchy." (Ha’aretz)

The Syrian army responded Thur. morning 7 Sept. 2017, to the air strike the previous night on a Syrian military site in western Syria. The Syrian army claimed that Israeli warplanes fired several rockets from the Lebanese airspace at 02:42 am on Thursday targeting one of the Syrian military posts near Masyaf, killing two army personnel and causing material damage to the site. “The attack proves Israel’s direct support for ISIS and additional terror organizations,” the army claimed. In addition, it threatened that "The aggressive Israeli attack could have dangerous consequences on stability and security in the region."
Later Thurs. Executive Director of Tel Aviv University's Institute for National Security Studies Amos Yadlin noted that the strike was “not routine.”
“It targeted a Syrian military-scientific center for the development and manufacture of, among other things, precision missiles, which will have a significant role in the next round of conflict.” The factory that was targeted in Masyaf produces the chemical weapons and barrel bombs that have killed thousands of Syrian civilians,” he continued. “If the attack was conducted by Israel, it would be a commendable and moral action by Israel against the slaughter in Syria.”Yadlin emphasized that “The attack sent 3 important messages.
1: Israel won't allow for empowerment and production of strategic arms.
2: Israel intends to enforce itsredlines, despite the fact that the great powers are ignoring them.
3: The presence of Russian air defense does not prevent airstrikes attributed to Israel. Now it's important to keep the escalation in check and to prepare for a Syrian-Iranian-Hezbollah response, and even opposition from Russia,” he said. (INN)

A UN Commission of Inquiry said 6 Sept. 2017 that Sukhoi 22 aircraft operated by the Syrian Air Force carried out the attack on the Syrian village of Khan Sheikhoun on 4 April 2017 that killed at least 83 people, injured close to 300 others, and prompted President Trump to order cruise missile strikes on the airfield where the planes were based. The panel said at least 20 chemical weapons attacks were carried out from March 2013 to March 2017 by government forces, though the number of reported chemical attacks is vastly higher. Charles Lister, a senior fellow at the Middle East Institute in Washington, noted that the UN report "comes just as the international community is loosening or removing altogether its opposition to Assad's continued rule." (N.Y.Times)

Speaking just hours after Syria accused Israel of striking a military site responsible for research on chemical weapons, Israel's President Reuven Rivlin warned German Chancellor Angela Merkel that Iranian ambitions to establish a foothold in Syria via a Shiite corridor into its territory would 'plunge the entire region into a war.' Rivlin also reiterated that Israel would be obliged to respond in the face of Hezbollah's rearmament. The warning came during a meeting in Germany just hours after Syria threatened “serious consequences” following an alleged Israeli aerial strike on a scientific center near Hama, which is responsible for research and development of nuclear, biological, chemical and missile technology and weapons. Iran, the president told Merkel, was leading efforts to establish a Shiite corridor into Syria and spread its dominion throughout the Middle East, a fact which he said would constitute a direct threat to Israel and to stability in the region. Laying out the dangers before Merkel of Hezbollah’s activities in Lebanon being abetted by Tehran, Rivlin explained that the Lebanese population itself is being seriously endangered in direct contravention of UN security council resolutions. (Ynet)

Beginning 4 Sept. 2017, the Israel Defense Forces deployed thousands of air, sea and land personnel to the Lebanese border for its biggest military drill in almost two decades. A military official said the exercise was to prepare for "preserving the current stability in the northern sector," as well as "scenarios we'll be facing in the next confrontation with the Lebanon-based Hezbollah terrorist group." The drill is utilizing planes, ships, submarines, drones, cyber and canine units, and Israel's missile defense system. Elite units are practicing disarming bombs and locating and fighting in tunnels. Two field hospitals and trucks and helicopters for evacuating casualties have also been set up. (UK Independent)

‘BEFORE WEARING A HIJAB, SHE WAS JUST AND ORDINARY WHITE GIRL’:

Anti-Israel activist Linda Sarsour is never seen without wearing her trademark Islamic head covering, or hijab. However, a new video has surfaced shows Sarsour admitting that she wears a hijab in order to be considered a 'person of color.' In a video clip uncovered by popular blogger Elder of Ziyon, Sarsour says that "when I wasn’t wearing a hijab I was just some ordinary white girl from New York City. Wearing hijab made you know that I was Muslim." Despite her light skin tone, Sarsour commonly identifies as a person of color, and berates her critics for being 'white supremacists.' In August 2017 Sarsour compared Zionists to white supremacists at a rally for controversial Quarterback Colin Kaepernick, saying that "We will not be silenced by by white supremacists, by neo-Nazis, or right-wing Zionists." (Arutz-7)

One of the world’s most extensive and prolific abortion networks has passed a tragic milestone. In 2016, the International Planned Parenthood Federation (IPPF), for the first time reported in its history that it had aborted more than one million unborn baby boys and girls in a single year. The final death toll for 2016: 1,094,679 children lost through surgical or chemical abortion —roughly the equivalent of the population of Austin, Texas. IPPF also performed an additional 3.6 million abortion-related activities including abortion counseling, consultation, and diagnostic procedures. The figures were recently released in IPPF’s Annual Performance Report 2016. (WND) Over a million, beautiful, God-given lives aborted in the name of “free choice.” May God have mercy on the unborn and bring repentance to those who engage in the business of the daily murder of hundreds of innocent babies.

PRO-LIFE MOVEMENT URGES CONGRESS TO DEFUND PLANNED PARENTHOOD IMMEDIATELY:
​
Ten of the most prominent pro-life leaders in the USA sent a letter to Congress last week urging the legislature to defund Planned Parenthood once and for all. “This Republican Pro-life Congress made a promise to American voters to stop taxpayer funding for the largest abortion chain in the nation, Planned Parenthood,” the letter said. “It is now well past time to deliver on that promise.” Congress failed to pass the health care bill repealing and replacing Obamacare before the August 2017 recess. That bill also included a provision for defunding Planned Parenthood, which receives more than $500 million in annual taxpayer funding. The pro-life leaders urged Congress to revisit that bill. President Trump promised during the campaign to redirect Planned Parenthood’s funding to women’s health clinics that do not perform abortions. But infighting over how to repeal and replace Obamacare has stalled that effort, and Planned Parenthood continues to receive taxpayer dollars. The organization performs roughly 900 abortions every day. (Washington Times)