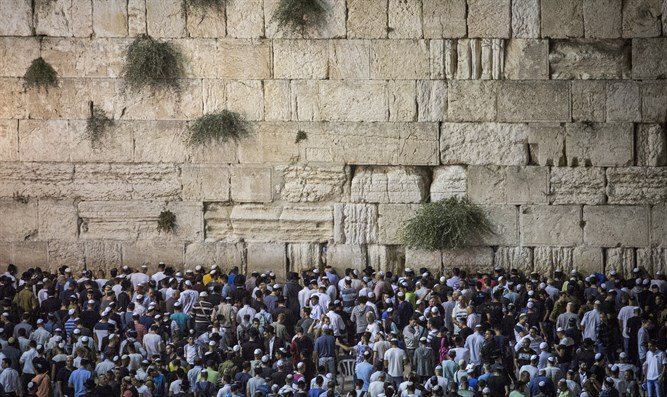 ‘THE JEWISH PEOPLE AT ITS BEST’:

Thousands of Jews flooded the alleyways of the Old City of Jerusalem on Sunday 8 Oct. 2017, and headed towards the Western Wall, where the traditional priestly blessing took place in honor of the Succot holiday. After the priestly blessing, Israeli Chief Rabbis Yitzhak Yosef and David Lau, and Western Wall Rabbi Shmuel Rabinowitz shook hands with the thousands of Jews, wishing them a happy holiday and sweet new year. Agriculture Minister Uri Ariel said, “The Jewish People at its best, tens of thousands of people going up to the Western Wall, looking up to the place of the Holy Temple - 'And let our eyes behold your return to Zion.'” (INN)

Iran’s Revolutionary Guards on Sunday 8 Oct. 2017 warned the United States against designating it as a terrorist group, saying USA regional military bases would be at risk if further sanctions were passed. The warning came after the White House said on 6 Oct. 2017 that President Donald Trump would announce new USA responses to Iran’s missile tests, support for “terrorism” and cyber operations as part of his new Iran strategy. “As we’ve announced in the past, if America’s new law for sanctions is passed, this country will have to move their regional bases outside the 2,000 km range of Iran’s missiles,” the commander of the Revolutionary Guards, Mohammad Ali Jafari said. He further warned that additional sanctions would end the chances for future dialogue with the United States. Jafari also said that Tehran would ramp up its defense capabilities, including its missile program, if the USA undermined a nuclear deal between Iran and Western powers. His comments come amid reports indicating that Trump plans not to recertify Iranian compliance with the 2015 Iranian nuclear deal. The president must inform Congress whether Iran is complying with the deal by 15 Oct. 2017. (Reuters)

'COUNT DOWN DAYS TO DEATH' IN ISRAEL:
​
In one of the fieriest speeches directed at Israel by Hezbollah terrorist chief Hassan Nasrallah, he called for the ethnic cleansing of all Jews in Israel, the destruction of the Jewish state and told Israelis to begin a “count down to death.” The Investigative Project on Terrorism said the threats contain two messages. “The first message is a reaffirmation of the Shi’ite axis’ jihadist, ideological, long-term commitment to Israel’s destruction,” the report said. “The second message is more immediate; it is an attempt to deter Israeli decision makers from trying to stop Iran and its proxies from taking over Syria.” Iran, Hezbollah and several other Shi’ite militias are helping the Syrian regime of Bashar Assad regime complete its victory over ISIS, with the assistance of Russian airpower. The upsurge in war-like rhetoric toward Israel is a signal of growing confidence fueled by their victories in Syria, said the IPT report.

Nasrallah has good reason to remain fearful of Israel, for it is the only state that has both the capability and determination to challenge their takeover of Syria. There have been a series of reported Israeli precision strikes on weapons production centers and arms smuggling attempts in Syria. One strike reportedly targeted the Assad regime’s Scientific Studies and Research Center weapons facility, where chemical, biological, and advanced ballistic missiles are developed and manufactured. Israel issued its own warning on what is taking place in the region. “The next conflict, if it erupts, will have a completely different character,” said Israeli Defense Minister Avigdor Liberman. “Our enemies will try first to strike our population centers and civilian infrastructure. And if our red lines will be breached, the other side must know in advance that it is going to pay very heavy prices.” (WND)

ABBAS SAYS ‘NO’ TO TRUMP:

The Fatah Revolutionary Council, headed by Mahmoud Abbas, met at the Palestinian Authority presidential headquarters in Ramallah to discuss the latest developments in the efforts to achieve reconciliation with the Hamas terrorist organization. Fatah leader and PA Chairman Abbas said at the meeting that Jerusalem was "the eternal capital of the state of Palestine." He praised the 'victory' of the Arab residents of Jerusalem against the "tyranny of the occupation" after the thwarting of the installation of metal detectors at the entrance to the Temple Mount. He also called on the UN Human Rights Council to publish its blacklist of companies which do business in Jewish communities in Judea & Samaria, and reiterated that the payments made to terrorists in Israeli prisons would continue. Abbas called the payments to terrorists a national, moral, political and human duty. The terrorists paid by the PA include many murderers and attempted murderers. The harsher their sentence, the greater the salary they receive, effectively creating a situation where the more Jews a terrorist murders, the more money he receives from the PA government. Abbas also rejected the demand to recognize Israel as a Jewish State. USA President Trump has called on Abbas to work to end terrorism, including by cutting off funding for terrorists and by ending incitement to violence against Jews. Abbas has refused. (INN)

"The Green Party in the southern German state of Bavaria on 7 Oct. 2017 passed a resolution rejecting the Boycott, Divestment and Sanctions campaign because of anti-Semitism, at the same time urging its party affiliates to pull the plug on BDS activities targeting the Jewish state. The resolution noted that “BDS positions and demands delegitimize and demonize Israel and thereby assign all blame for every evil in the region to Jews.” The document continued, “Israel is the only democratic state and at the same time double standards are applied to Israel when, for example, the criminality of Hamas is ignored or played down.” The Bavarian Greens said the “call for a boycott reproduces the National Socialist slogan ‘Don’t buy from Jews!’" The party urged all affiliates of the Greens, including the federal party, which is expected to be in Chancellor Angela Merkel’s new coalition government, to not cooperate with BDS. The youth organization of the Green Party in Bavaria initiated the anti-BDS resolution. Eva Lettenbauer, a spokeswoman for the Green Youth organization, said the anti-Semitic BDS campaign “does not recognize Israel’s right to exist” and attempts to damage Israel via boycotts. (J.Post)

Facebook banned a man who fought incitement on Arabic-language Facebook pages and was blocked for "incitement" himself. The man, A., responded to those praising the terrorist who killed three and wounded one in the recent terror attack in Har Adar, and suddenly found himself blocked. The Arabs' curses on the Har Adar victims, however, are still online. "After the terror attack, I visited a Facebook page called the 'Jerusalem Media Center.' It's run by Arabs," A. told reporters. "When I started reading, I saw a detestable sight. The terrorist murderer was called a 'shahid,' a martyr. That's an expression of honor. I read through the comments of various visitors. They were all exalting and praising the terrorist. 'Allah will have mercy on the heroic martyr,' and 'Allah will give the martyr a place in Paradise,' were some of the responses. Commenters also cursed the murdered victims.

I told the commenters that I don't curse all Arabs just because I disagree with them, and I don't think all Arabs are bad. They wrote that the terrorist is going to Paradise, so I wrote that I think he's going to hell, and 'going with him are all those who encourage him.'” A short while later, when A. attempted to log in to his Facebook account, he discovered that Facebook had blocked him for violating Facebook's rules. "They decided that I was inciting," A. explained. "That's hypocritical. Facebook is full Arab incitement, incitement flourishes there. Those pages publish incitement against Jews who visit the Temple Mount. They also incited against Jews who visited the Western Wall for selichot prayers, writing that it was a 'shame they weren't blown up, it's a shame they weren't burned,' etc. This happens every day, and Facebook does nothing but silence those who try to balance it out." While A. has contacted Facebook, the company has yet to respond. (Arutz-7)

​srael's north, center, and northern Negev received rain on Mon. 9 Oct. 2017, temperatures for the week are expected to remain below seasonal average. Israel's first rains fell during the week-long holiday of Succot, providing hope for the Kinneret's (Sea of Galilee) recovery. In Sept, 2017 Water Authority spokesman Uri Shore said that the Kinneret hit a record low the previous month, and "if God forbid the coming winter is similar to the previous four, then our water sources are going to be in huge trouble." Monday morning saw rain showers in Israel's north and center. There were also isolated thunderstorms. (INN)