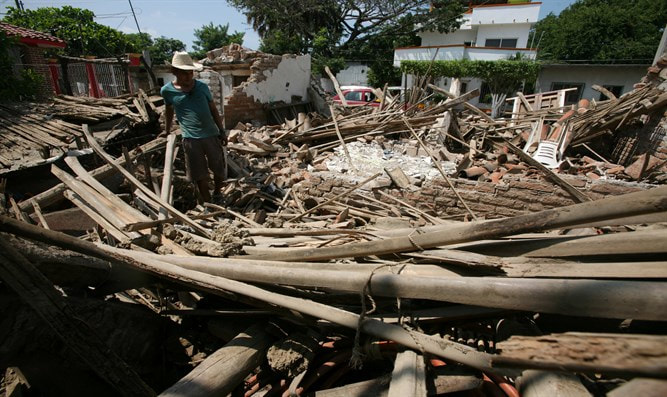 JTA – ISRAEL WILL OFFER AID IN RECONSTRUCTION AN ANY OTHER ASSISTANCE NEEDED IN MEXICO IN THE WAKE OF A SEVERE EARTHQUAKE:

“Israel sends condolences to the families of the victims. We understand that these are difficult days for this country, for the Mexican people,” Israeli Prime Minister Binyamin Netanyahu said Sunday during the weekly Cabinet meeting.
At least 90 people have died in the 8.1 magnitude earthquake that struck off the southern Pacific coast on Thursday night. The Mexican states of Oaxaca and Chiapas was hardest hit.

​Netanyahu said he would offer the aid in person when he meets with Mexican President Enrique Peña Nieto on Wednesday, part of his visit this week to Latin American, the first such visit by a sitting Israeli prime minister. Netanyahu also serves as Israel’s foreign minister.

Israel’s Ministry of Foreign Affairs announced Sunday that together with the International Cooperation Center of the Ministry of Foreign Affairs and the Israeli Embassy in Mexico, will provide assistance to the Mexican states of Oaxaca and Chiapas. “The aid will be given in the coming days by the ambassador to Mexico, Yonatan Peled and his team to the governors of the regional states” in conjunction with Netanyahu’s visit, the ministry said in a statement.

ISRAEL RUSHES AID TEAMS TO FLORIDA:
​
Israeli humanitarian-aid groups are on their way to Florida in the wake of Hurricane Irma. Three teams of volunteers fromIsraAID, ZAKA Search and Rescue, and the Israel Rescue Coalition, all of who rushed to help in the aftermath of Hurricane Harvey in Texas, are now on their way to Florida to help. Other Israeli aid teams are heading to Mexico, which was hit by a deadly earthquake on 7 Sept. 2017, and are offering aid to communities in Haiti and the Caribbean also devastated by Irma. (Israel 21c)

Israel will offer aid in reconstruction and any other assistance needed to Mexico in the wake of a severe earthquake. “Israel sends condolences to the families of the victims. We understand that these are difficult days for this country, for the Mexican people,” Israeli PM Netanyahu said 10 Sep. 2017. At least 90 people have died in the 8.1 magnitude earthquake that struck off the southern Pacific coast. The Mexican states of Oaxaca and Chiapas was hardest hit. Netanyahu said he would offer the aid in person when he meets with Mexican President Enrique Peña Nieto this week, on part of his visit to Latin American, the first such visit by a sitting Israeli prime minister. (JTA)

TAYLOR FORCE ACT TO BE ENFORCED STARTING IN 2018:

The Taylor Force Act was attached to the 2018 Foreign Operations budget in the Senate on 7 Sept. 2017. The Taylor Force Act would cut USA funding to the Palestinian Authority (PA) until it ends its policy which distributes $300 million to terrorists and their families annually. The bill is named after Taylor Force, a former United States Army officer who was murdered in a stabbing attack in 2016, while walking along the Jaffa boardwalk. A recent report found that more than half of the PA's yearly budget goes to terrorists, with more than $1 billion having been dedicated for such purposes in the last four years alone. Despite pressure to end the policy of paying the families of terrorists who murdered Jews, PA chairman Mahmoud Abbas told the United States last month that he has no intention of doing so. "I do not intend to cease paying salaries to the families of prisoners and martyrs, even if it means I lose my position. I will continue paying their salaries until my dying day," he said. (Arutz-7)

PM Netanyahu revealed 10 Sept. 2017 that dozens of terror plots were stopped in the past two months by the Shin Bet domestic security service. “In July and August, the Shin Bet thwarted over 70 terrorist cells that were planning attacks against Israeli soldiers and civilians,” Netanyahu said. “Israeli civilians don’t know everything that the Shin Bet does.” He did not elaborate on the nature of the attacks. Last week the agency said in its monthly report that it had recorded 110 terror attacks in Aug. 2017 compared to 222 the previous month, when tensions around the Temple Mount compound in Jerusalem generated a major spike in incidents. The decrease brought the number of attacks back to a level similar to before the July conflagration, which resulted in the highest number of incidents in any month since Dec. 2015. From Jan. 2016 onward, Israel saw an average of 121 attacks against its citizens per month. (Times of Israel)

IDF: ISRAEL IS DEALING WITH THREATS NEAR AND FAR:

IDF Military Intelligence chief Maj.-Gen. Herzl Halevi said last week that Israel is "dealing with threats near and far," following reports of an Israeli strike on a chemical arms plant in Syria. He added: "The threats to Israel are from armed terrorist groups, most of them aided and funded by Iran. They are grave threats, but not existential ones." According to Halevi, "Our enemies know well the combination between precise intelligence and abilities. Iran, which wishes to establish a foothold on our border, is flooding the area with lethal arms and an ideology which is no less lethal. The IDF is working to keep the war back, and prepare for it." (Ha'aretz)

‘IRAN IS THE GREATEST THREAT TO ISRAEL’:

Defense Minister Avigdor Liberman on 10 Sept. 2017, said at the International Institute for Counter-Terrorism’s 17th annual international conference in Herzliya, "All Islamic terror is supported by Tehran. This includes Sunni terror, the groups in Yemen, and even Al-Qaeda. And we are all aware of the cooperation between Al-Qaeda and Iran's Revolutionary Guard. Terror is a radical ideology which abuses the weak and supposedly works for their benefit. Brutal methods and a lack of red lines characterize all terror organizations throughout the generations. Another characteristic is the attempt to 'export' the terror, to 'export' the revolution. What enables terror to exist? According to Liberman, the answer is a sovereign government. "Terror will always have a charismatic and stirring leadership," he said. "The most frightening and dangerous organization is the Revolutionary Guard. The most important characteristic of any terror organization is a governmental framework which supports it, whether openly or secretly. Without this government support, terror could not exist."

Liberman then discussed possible courses of action. “You need to understand that for Tehran, terror is just one way of accomplishing their goals. Tehran works on four different levels to destroy the State of Israel: In addition to financing terror, Iran also works to acquire non-conventional weapons, to create a large conventional army, and to wage a cyber battle against Israel. Will Hezbollah continue to exist without Iranian support? Absolutely not. Can Hamas exist without Iran? Certainly not in its current proportions. Certainly, the Islamic Jihad cannot exist without Iran. We can identify the source, but not always do we say it in public. The main issue today is Iran." (INN)

IRAN BOASTS THAT IT TRICKED THE WORLD, CAN NOW START MAKING NUKES:

Israel warned former USA President Barack Obama that Iran wouldn't honor the nuclear arms deal he brokered with the Islamic Republic. The ayatollahs and their elected puppets went through the motions, but never truly fulfilled the stipulations of the agreement. The West, fearful of escalating tensions, turned a blind eye to numerous violations. But that only kicked the can down the road, as the Americans say. Now, top Iranian officials are openly boasting of successfully playing the West, while retaining the ability to restart their nuclear arms program at a moment's notice. In a 22 Aug. 2017 interview on Iran's IRINN TV, the head of the Atomic Energy Organization of Iran, Ali Akbar Salehi, revealed that his people had poured cement into a few external pipes at the Arak nuclear reactor in order to fool international inspectors, but had not disabled its core. "If we want to, we can start enriching uranium to 20% within five days, and that is very significant," said Salehi. The question is whether or not Western powers see it as such. (Israel Today)

RAISING ANTI-SEMITISM IN GERMANY IS WORK OF THE FAR RIGHT, SAYS GOVERNMENT TALLY:

Right-wing extremists have committed the vast majority of anti-Semitic and anti-Israel offenses in Germany, which have seen a rise over the corresponding period last year, according to a government report. Of the 681 incidents reported from January to August 2017, 92% were committed by right-wing extremists. In 23 cases, political motivations such as the Israeli-Palestinian conflict were involved. In that period last year, there were 27 fewer such crimes registered. The report, which the Interior Ministry provided this week was requested by Green Party legislator Volker Beck. Charlotte Knobloch, head of the Jewish community of Upper Bavaria and Munich, said the numbers were “oppressive for the Jewish population and shameful for our country.” Even though they were not much higher than last year’s, the figures “are all the more upsetting if you look at them in the context of the small number of Jews in Germany,” Knobloch said.
​The country’s Jewish population is about 200,000, or 0.25 percent of the total population in Germany. Beck said the reported crimes are “only the tip of the iceberg.” The dark number of unreported crimes is - we fear - much higher,” he said in a statement, adding that many victims of such crimes still fear going to the police. Beck also said the problem came from the entire society “and not just from refugees, immigrants or Muslims.” Right-wing, populist political parties have tried to put the blame for growing intolerance and other societal ills on those populations, especially in the countdown to national elections later this month. (JTA)