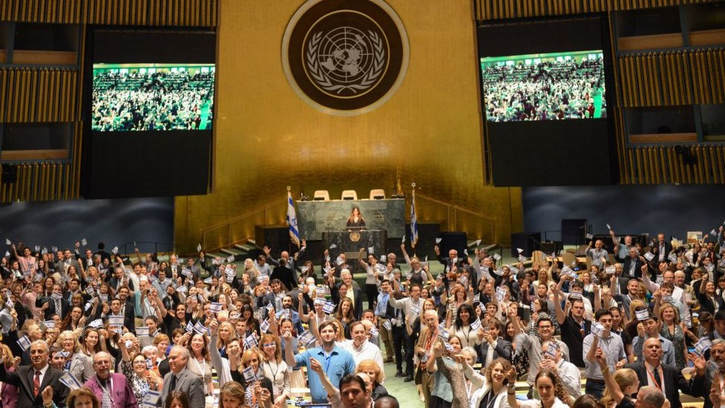 The United Nations Human Rights Council is poised to become the world’s leading proponent of the Israeli boycott movement, Israel’s Ambassador to the UN Danny Danon said on Monday 21 Aug. 2017. Danon lashed out the UNHRC and its High Commissioner for Human Rights Zeid Ra’ad Al Hussein for their pending publication of a black list of companies doing business with Israel in areas over the pre-1967 lines. “Instead of focusing on the terrible humanitarian problems plaguing the globe, the Human Rights Commissioner is seeking to harm Israel, and in doing so has become the world’s most senior BDS activist,” Danon said. The data base due out at the end of the year includes companies operating in east Jerusalem, Judea & Samaria and the Golan Heights. “This shameful step is an expression of modern anti-Semitism and reminds us of dark periods in history,” Danon said. “I call on the UN, and the international community as a whole, to halt this dangerous policy and put an end to this anti-Israel initiative,” Danon said. The Trump Administration including USA Ambassador to the UN in New York Nikki Haley has already condemned the list. (J.Post)

The boycott, divest, and sanction (BDS) movement seeks to cut economic ties with Israel. Since its beginnings over a decade ago, BDS has never been invoked against any other country. Common sense and decency asks how a self-described "human rights" movement can single-out the only democracy in the region, while ignoring the brutal treatment of women and minorities in countries such as Saudi Arabia, Iran and Pakistan. BDS is simply another anti-Semitic hate fest. Jewish history demonstrates that where anti-Semitism becomes legitimate, anti-Semitic violence follows. Almost everything the Nazis said about the Jews is said today by BDS supporters about Israel. There is a worldwide struggle today against the very existence of one country of the all countries in the world. Not North Korea. Not Iran. Not Sudan. Only Israel. Pray against the vicious BDS campaign.

The Trump administration is urging the United Nations not to publish a “blacklist” of international firms that do business in Israeli communities in Judea & Samaria, diplomats and others said, 21 August 2017. The UN Human Rights Council voted to approve the database of companies last year, despite objections from the United States and Israel. American companies on the list drawn up by the Geneva-based council include Caterpillar, TripAdvisor, Priceline.com, Airbnb and others. Zeid Ra’ad Al Hussein, the UN high commissioner for human rights, has told USA officials he plans to publish the list by the end of the year and has asked for comments by 1 Sept. 2017 from countries where affected firms are headquartered. When the announcement of the blacklist was first made public, PM Netanyahu condemned it and said that "the UNHRC has become an anti-Israeli circus with their attacks on the only democracy in the Middle East and their disregard for the gross violations in Iran, Syria and North Korea.” The prime minister called on “responsible governments” not to respect the UN resolution that discriminates against Israel. The UN is known for its anti-Israel bias, and regularly approves anti-Israel resolutions. The body's former Secretary-General, Ban Ki-moon, publicly admitted that the UN has an anti-Israel bias. (INN)

POLL: 1 IN 3 BRITISH JEWS HAS CONSIDERED EMIGRATING DUE TO ANTI-SEMITISM:

In interviews with thousands of British Jews, almost a third of them said they have considered leaving the United Kingdom over the past two years due to anti-Semitism. The findings are part of a report published Sunday 20 Aug. 2017, by the Campaign Against Anti-Semitism watchdog group, which conducted since 2015 interviews with more than 10,000 British Jews. In interviews conducted in 2016 and 2017 with a combined sample population of 7,156 respondents, 37% of them said they have been concealing public signs that would indicate that they are Jewish. Only 59% of the respondents since 2015 said they feel welcome in the United Kingdom. Only 39% of respondents from 2015 onward said they trust justice authorities to prosecute perpetrators of anti-Semitic hate crimes. Three-quarters of the people interviewed said they feel that recent political events have resulted in increased hostility towards Jews. Since 2015, 80% of respondents said they believe that the Labour Party is harboring anti-Semites in its ranks. The survey’s respondents said they considered Islamist anti-Semitism “to be the threat that concerned them the most, and that rapidly rising hate crime targeting Jews was not being tackled by the authorities.” The Jewish community of the UK recorded 767 anti-Semitic attacks in the first half of 2017 - the highest figure recorded within six months since monitoring began in 1984. (J.Post)

UK LAWYER: ‘ZIONISTS SHOULD ALL BE SHOT, JEWISH REFUGEES BOMBED’:

A partner at a British law office has been fined after calling for the murder of Jewish refugees and “Israeli Zionists”. Forty-year-old Majid Mahmood, director of Liberty Law Solicitors and a partner at the City Law Chambers in Luton was fined 25,000 pounds ($32,100) by the Solicitors Disciplinary Tribunal over several social media comments he made in 2015 and 2016. In addition, Mahmood was given a suspended sentence of 12 months, barring him from performing legal services if he commits a similar offense, and was required to pay 9,595 pounds ($12,322) in legal fees as a result of the complaint against his offensive comments. The complaint against Mahmood was filed by the UK Campaign Against Anti-Semitism. In 2015, Mahmood called for “all the Israeli Zionists” to be shot dead, adding that he hoped their bodies would be sent as a gift to then-President Obama. A year later, Mahmood commented on a video story regarding Jewish refugees being flown to safety, writing “They aren’t god’s chosen people they’re Satan’s love child and it’s a shame the plane carrying them didn’t blow up mid air.” Despite the outrageous comments, the Solicitors Disciplinary Tribunal accepted Mahmood’s claim that his remarks were made merely with regard to “Zionists”, and in no way suggested he was anti-Semitic. The tribunal refused to disbar Mahmood. (Arutz-7)

Signs with anti-Semitic messages were hung on highway overpasses in Oregon. The banners were hung on two northbound highways, which were heavily travelled by California tourists heading to the state to get a better view of Monday’s 21 Aug. 2017 solar eclipse. The banners read, “UNJEW HUMANITY,” “Eclipse Whitey,” and “Jewish Financing Available.” They were taken down late Saturday 19 August 2017. Beth Dershowitz of Sacramento told the Oregonian newspaper in an email that the banners upset her, her husband Michael, and their children during their family road trip on Saturday. She said her husband took photos of the banners to show state transportation officials. “I cannot believe that we still have to face this vicious anti-Semitism in such a public place in 2017,” she wrote. “We want to expose this hatred so people stop pretending like it isn’t happening in our own backyards.” (INN)

A 12-member ISIS cell intended to target hundreds of innocent victims with truck bombings at the Sagrada Familia basilica - Barcelona's most famous landmark - and the city docks, as well as the Las Ramblas pedestrian boulevard. But an accidental blast on 16 Aug. 2017 destroyed their bomb factory in Alcanar, 120 miles south of Barcelona. Investigators sifting through the rubble in Alcanar found traces of TATP, which was used in the Tube bombings in London in July 2005 and the May attack this year in Manchester. It was also used in the Nov. 2015 Paris atrocity and the March 2016 Brussels bombings. (UK Mailonline)

Two North Korean shipments to a Syrian government agency responsible for the country's chemical weapons program were intercepted in the past six months, according to a confidential UN report on North Korea sanctions violations submitted to the Security Council this month. "The panel is investigating reported prohibited chemical, ballistic missile and conventional arms cooperation between Syria and North Korea," the experts wrote in the 37-page report. (Reuters)

ISRAEL’S GASOLINE PRICES THE 3RD HIGHEST IN THE WORLD, SURVEY FINDS:
​
Israeli drivers pay the third-highest prices in the world to fill their cars with gasoline, according to a survey by the Bloomberg news agency released this month. The survey, called "Gasoline Prices Around the World," found that the average price per gallon of gas in Israel is $6.68. Only Norway and Hong Kong ranked higher for gas prices. In Venezuela, which is undergoing political turmoil, gas costs just 1 cent per gallon. In Saudi Arabia, drivers pay 84 cents per gallon, while in Iran the price is $1.25. In the United States, the average price per gallon is $2.56. Taxes -- namely withholding tax and value-added tax -- are the main reason why gas is so expensive in Israel, accounting for 67% of the price at the pump. (Israel HaYom)