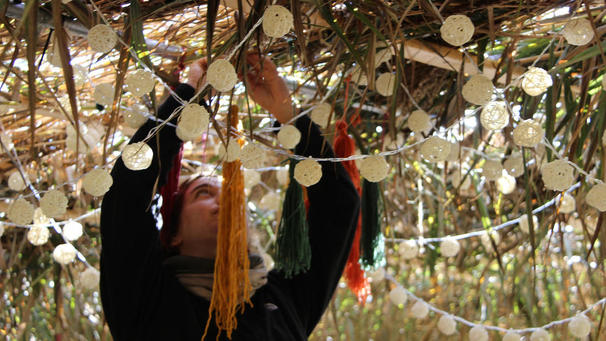 Israelis celebrate Succot this week and are preparing for the most joyous festival on the Jewish calendar. The holiday begins this year at sunset Wed. 4 Oct. 2017, and will continue through dusk Thur.12 Oct. Throughout Israel, families have built succahs (huts) with a roof covering of palm branches. Children have made and hung decorations inside these temporary dwelling places. For seven days and nights, families and guests will eat their meals in the succah and otherwise regard it as their home. This is to commemorate the forty years traversed in the Sinai Desert prior to entering the Holy Land during which Moses and the children of Israel dwelled in tents. Staff members at Vision for Israel & The Joseph Storehouse send warmest Succot greeting to our faithful friends, intercessors, and all who love Israel around the world. Pray for the well-being of the nation during these holiday times; safety for those who dwell here and for those who are visiting in vast numbers from around the world. Also, please begin to intercede for abundant precipitation to be poured out upon Israel as the rainy season approaches. Years of drought have made ever decreasing water source a serious problem in the nation.

ISRAEL’S TRADE WITH RUSSIA LEAPS BY 25%:
​
Trade between Israel and Russia has grown this year by 25%, officials from both countries revealed. The first six months of 2017 saw increased trade between the nations of about $380 million over the corresponding period last year. Ze’ev Elkin, the cabinet minister responsible for environmental protection and issues connected with Jerusalem said, “There is still great potential for increase in trade and there is much work ahead of us,” Elkin said in reference to ongoing talks since 2013 on signing a free trade agreement with Russia. Temur Ben Yehuda, chairman of the Israeli Russian Business Council said, “We are not only conducting dialogue on increasing trade, we are also signing major agreements between Israel and Russian firms, including Watergen, Assuta and many others,” he said. The increase comes amid tightening cooperation between Israel and Russia on security issues connected with Syria, where the Russian government is engaged in propping up the beleaguered regime of the country’s president, Bashar Assad. Russia’s relations with Israel, which has remained neutral on the Syrian issue, have noticeably improved, with PM Netanyahu traveling to Moscow at least five times in one year. (Times of Israel)

In an effort to boost trade in the Palestinian territories, an Israeli agricultural institute has been training Palestinian farmers to improve their harvest of the internationally popular avocado pear. Israel’s Foreign Ministry has described the collaboration between the Galilee International Management Institute (GIMI) and a group of Palestinian agricultural engineers as a “unique cooperation” that promotes coexistence. GIMI has been working with Arabs for 30 years. Indeed, during heightened tensions over the Temple Mount this summer, GIMI was running a course for Jordanian, Palestinian and Israeli olive oil producers as well as starting a tele-course for computer engineers in Gaza. Among other such projects, GIMI has been training Palestinians in growing avocados for export. Israel is already internationally renowned for its export of avocados - a healthy, tasty fruit that has been described as “green gold.” Because the fruit is in great demand, the GIMI institute thought it would be especially beneficial for Palestinians to join in its farming and trade. The training course was was created for Palestinian agricultural extension officers who would then train local farmers. (Kehila News)

Two women were stabbed to death and their assailant shot dead by soldiers in the southern port city of Marseilles on Sunday 1 Oct. 2017 in what police sources described as a "likely terrorist acts.” Three police sources said the suspect had shouted "Allahu Akbar" as he carried out his attack at Marseille train station. Police cordoned off the area. France has been in a state of emergency following a spate of attacks by Islamist terrorists over the last two years, including attacks in Paris in Nov. 2015, which killed 130 people. Other countries, including Britain, Germany and Belgium, have also suffered attacks using knives, guns, explosives and vehicles. A witness told Reuters she saw a man take out a knife from his sleeve and then stab a young girl and then a second woman, and that he was shouting "Allahu Akbar.” French media reported that one of the women had her throat slit, while the second woman was stabbed in the stomach. The assailant was shot dead by soldiers who were patrolling the station. (Reuters)

Canadian police say an attack on an officer outside a football game and a high-speed chase of a U-Haul that left four people injured are being investigated as acts of terrorism. Edmonton Police Chief Rod Knecht said Sunday 1 Oct. 2017 that officers have one person in custody and they think he acted alone. The chaos began outside a Canadian Football League game when police say a vehicle rammed a traffic control barricade and sent an officer flying. Knecht said the driver then got out and attacked the officer with knife. A few hours later, a U-Haul van was stopped at an impaired driving check stop and the driver sped off with police in pursuit. Police say the U-Haul hit and injured four pedestrians before it rolled and the suspect was arrested. (Fox)

Lebanon’s Hezbollah accused Israeli PM Netanyahu’s government on Sunday 1 Oct. 2017 of pushing the region to war in Syria, Lebanon and the Gaza Strip, and said nowhere in Israel would be safe if such a conflict were to erupt. Tensions have risen this year between Iran-backed Hezbollah and its arch enemy Israel, which last fought a major conflict in 2006. Israel has said it would use all its strength from the start in any new war with Hezbollah. In a speech to followers, Hezbollah leader Sayyed Hassan Nasrallah said the Israeli government did not have “a correct assessment of where this war will lead if they ignite it, and did not know how it would end.” In June 2017 Nasrallah said a future Israeli war against Syria or Lebanon could draw thousands of fighters from countries such as Iran, Iraq, Afghanistan, Yemen and Pakistan. Nasrallah called on Jews who immigrated to Israel to “leave and return to the countries from which they came so they are not fuel for any war waged by your foolish government.” He said the Jews of Israel “will have no secure place in occupied Palestine.” (Reuters)

AUSTRIA’S ‘BURKA BAN’ COMES INTO FORCE, PROHIBITING FACE VEILS IN PUBLIC PLACES:
​
A ban on full-face coverings, which includes Muslim veils such as those worn in burkas, came into force in Austria on 1 Oct 2017. The new law states that faces must be visible from hairline to chin in public places Austrian police are allowed to use force to make people show their face and can impose fines of €150 (£132). Austria’s ban comes after France and Belgium introduced a similar bans in 2011 and with the Dutch parliament also debating a similar law. Muslim groups have condemned the law saying only a minority of women in the country wear full-face veils. However, there has been strong support for the law reflecting growing anti-immigrant sentiment in the predominantly Catholic country. "It's not right that those living here don't show their faces," said one source, who expressed support for the ban in a straw poll on the streets of Vienna. Parties campaigning on an anti-immigration message are on course win elections on 15 Oct 2017. (UK Telegraph)

IRANIAN CHRISTIANS CELEBRATE NEW BELIEVERS IN MASS BAPTISM:
​
Being a Christian in Iran is very dangerous. Christian converts face persecution in many forms, but that hasn’t stopped 20 Iranian Christians from recently getting baptized. Many in the group of Christians converted to Christianity years ago, but have had to wait to be baptized due to the danger it places them in. For that reason, neither the identities of the converts nor the exact location of the baptism has been revealed. The group of converts reportedly got together to make a pilgrimage to the baptism site which was outside of Iran. "I've been waiting for this moment for nearly nine years," said one convert. "This was my wish before I die," said another. The mass baptism was a joyous event for these fervent believers who ranged in age from teenagers to the elderly. Nearly all of them have faced consequences and persecution for deciding to put their faith in Christ, but they have persevered. And although Iran is one of the most dangerous places for Christians and government authorities fear the spread of the Gospel, it is also one of the places where Christianity is growing by leaps and bounds. There are many reports of Muslims encountering Yeshua through dreams and visions. "We have been praying for years that Iranian people believe in Yeshua and get baptized. Now, this dream is coming true,” said a Christian convert whose brother was murdered for his faith in 1994. (CBN)