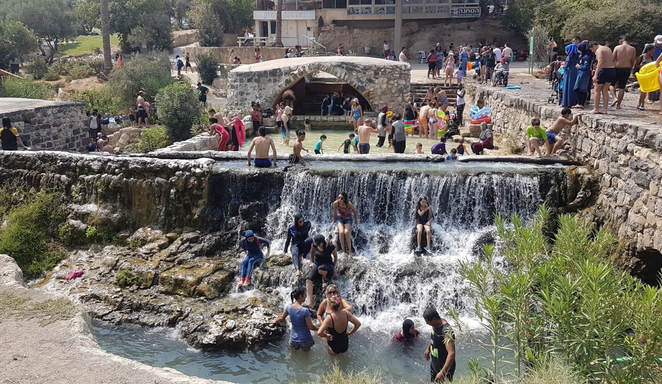 All across Israel, families celebrated the first day of the Jewish New Year by enjoying quality time in nature. Some 70,000 Israelis flocked to national parks and natural reserves across the country on Thurs. 21 Sept. 2017, to enjoy the warm weather with their families on the first of a four-day countrywide hiatus in celebration of the Jewish New Year. Families with small children traveled across Israel, going to hikes and visiting waterfalls up north. Some 200 motorcyclists rode to Belvoir Fortress south of the Sea of Galilee to catch the first sunrise of the new year, and thousands more are expected to travel to the country's beaches and other sites in the coming days. (J.Post)

GORO D’ITALIA CYCLING RACE TO OPEN IN ISRAEL IN 2018:

This will be the first time in 101 years any leg of the sport's Grand Tours will take place outside of Europe; more than 175 of world's best cyclists will arrive in Israel for the race, with hundreds of millions watching across the globe in the biggest sporting event ever held in Israel. Organizers said that details of the exact route of the three-day leg in Israel will be announced this week, with Italian and Israeli ministers making the announcement in Jerusalem along with Spanish great Alberto Contador. Viewed by hundreds of millions across the globe, it will be the biggest sporting event ever held in Israel and is expected to draw tens of thousands of tourists and cycling enthusiasts. "This is a hugely exciting moment for cycling and for Israel. An event of this magnitude is something that the country will always remember," said Daniel Benaim, CEO and owner of Comtec Group, the Giro's Israeli production company. (Ynet)

Israel-based international aid agency iAID Search & Rescue team has begun searching for survivors in Mexico. iAID's 70 member international emergency response team is working in sites where survivors are suspected to be buried. The team is working with the additional IDF mission on the ground and local officials to better increase efficiency of the search operation. The magnitude 7.1 earthquake struck late last week, near Mexico's southern coastline, killing nearly 300 people, triggering small tsunami waves and causing massive damage to property and infrastructure. The founding director of iAID, Shachar Zahavi, said: "iAID is in touch with its local partners and UN officials who are monitoring the current crisis on the ground. Tsunami warnings were issued in Mexico, Guatemala, El Salvador, Honduras, Panama, Nicaragua and Costa Rica." The quake was stronger than the devastating 1985 tremor that flattened swathes of Mexico City and killed thousands, but this time damage to the city was limited. (J.Post)

Israeli warplanes early on Friday morning 22 Sept. 2017 struck a Hezbollah weapons convoy outside Damascus, Arabic-language media outlets reported. According to reports, the three separate strikes were carried out near the Damascus International Airport, an area known to be a stronghold of the Iranian-backed terrorist group. There were no reports of casualties. Images of the alleged Israeli strike uploaded to social media showed a smoke and large ball of fire from the area near the airport. There was no immediate comment from Israel, Syria or Hezbollah on any of the reports. Israel has for years has been widely believed to have carried out airstrikes on advanced weapons systems in Syria - including Russian-made anti-aircraft missiles and Iranian-made missiles - as well as Hezbollah positions, but it rarely confirms such operations on an individual basis. Earlier this month, Israel allegedly struck a facility in northwestern Syria, where the regime was said to have stockpiled chemical weapons and missiles, killing two people. Jerusalem fears that the Iranian presence in southern Syria, near the Golan Heights, would serve as a springboard for terrorist groups to attack Israel in the future. (Times of Israel) The dangers to Israel present in the Syrian conflict and the allies hostile to the Jewish state Syria has amassed, cannot be underestimated – especially in the light of scripture: “The word of the Lord came to me again: ‘What do you see?’ ‘I see a pot that is boiling,’ I answered. ‘It is tilting toward us from the north.’ The Lord said to me, ‘from the north disaster will be poured out upon all who live in the land,’” Jer 1:13-14.

North Korea threatened early Friday 22 Sept, 2017, to detonate a hydrogen bomb over the Pacific Ocean in what the nation called the "highest level of hardline countermeasure in history." The threat followed news that President Trump's administration would impose further sanctions on Pyongyang for its missile and nuclear weapons program. The warning was delivered by N. Korean Foreign Minister Ri Yong Ho in New York. Ri did not elaborate on when the detonation might take place and added that any final decision on the matter would be taken by North Korean leader Kim Jong Un. N. Korea has never tested a nuclear device beyond its own borders. Were it to do so in the Pacific Ocean it would represent a dramatic and worrying new stage in its showdown with Washington over its attempts to become a nuclear-armed state. The escalation in warring rhetoric came after Kim responded to Trump's "rocket man" speech at the UN General Assembly this week by branding him a "mentally deranged dotard" - an insult that has left many people reaching for their dictionaries to determine which leaders' comments were more offensive or inflammatory. In his speech to the UN, Trump vowed to "totally destroy" North Korea if provoked. (USA Today)

Germany on 20 Sept. 2027, formally accepted an international definition of anti-Semitism in a move designed to provide clarity for the prosecution of related crimes. The German Cabinet announced it unanimously adopted the working definition promoted by the International Alliance for Holocaust Remembrance, a body with 31 member states. In addition to classic forms of anti-Semitism, the definition offers examples of modern manifestations, such as targeting all Jews as a proxy for Israel, denying Jews the right to a homeland and using historical anti-Semitic images to tarnish all Israelis. The European Parliament in January 2017 voted to adopt a resolution calling on member states and their institutions to apply the International Holocaust Remembrance Alliance’s definition of anti-Semitism. Britain, Austria and Romania have also adopted the definition. “We Germans are vigilant when our country is threatened by an increase in anti-Semitism,” Minister of the Interior Thomas de Maizière said following the Wed. morning meeting.“History made clear to us, in the most terrible way, the horrors to which anti-Semitism can lead.” Josef Schuster, head of the Central Council of Jews in Germany, welcomed the announcement “as a clear signal” that anti-Semitism is not tolerated in Germany. (JTA)

CAMPERS IN ISRAEL WARNED AFTER SERIES OF WOLF ATTACKS:

Ten incidents involving wolf bites have been reported over summer in Judean desert. The Arabian wolf is a subspecies of the grey wolf. The two most recent attacks occurred last weekend near Ein Gedi, when three children were bitten in separate incidents. Israeli authorities are warning families with young children to take extra care after a series of wolf attacks on campers in the Judean desert. A number of the incidents involved young children, leading to fears that an Arabian wolf or wolves may be exhibiting predatory behavior. The incidents at campsites and attractions began in May 2017 when a wolf entered the tent of a family holidaying near Masada. It later returned to bite one of the family’s young children a few steps from her tent. The have attacks continued over the summer.

​Haim Berger, who did his doctoral research on wolf behavior and guides visitors to see wild animals in the desert, said his own family had also encountered a wolf at a campsite near Masada without being aware there had been attacks. “In the middle of the night one of my girls woke me and said there is a wolf here. I didn’t know about recent attacks even though the park ranger had come round the day before. Now they are warning people.” Before this summer, the last wolf attack reported occurred in 2008, Berger said. He believes that the animals have become increasingly habituated to humans attracted by litter bins and other food around the campsites. Unlike in countries such as the United States and Canada, there is little awareness among campers in Israel of how to maintain holiday safely around wild animals. “I’ve been warning about the risk of this for almost 15 years – the risk of wolves getting gradually more used to humans and trying to convince people we need to keep a greater distance,” said Berger. (The Guardian)