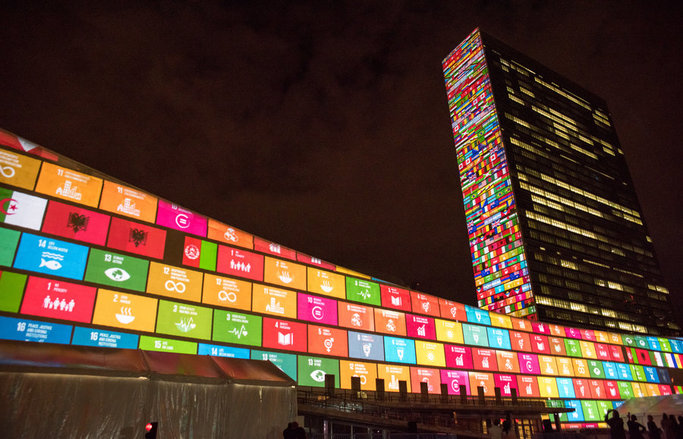 ‘THE UN IS PLAYING WITH FIRE’:

Israel’s Deputy Foreign Minister Tzipi Hotovely, who is on a working visit to the United States, responded to the proposed attempt by the UN Human Rights Council to publish a 2017 black list of companies which do business in Judea, Samaria, the Golan Heights, and eastern Jerusalem. "The UN is playing with fire," Hotovely warned. "The longer it continues to act against Israel, the more it will lose its budget. These actions could act as a boomerang, harming the UN. Israel is working together with the United States to formulate a plan of action to stop the UN bias towards Israel. "The UN Human Rights Council is the most hypocritical arena, and so that is where the transformation will begin." Hotovely traveled to Washington DC in order to meet with Trump Administration officials and members of Congress to discuss the Iranian and North Korean threats and how to end UN bias against Israel. (INN)

The Israeli government is preparing to take on one of the world’s most prominent NGOs over the group’s explicit endorsement of a boycott targeting Israeli products from Judea and Samaria. Amnesty International, a British-based NGO which describes itself as a “global movement” dedicated to ending “abuses of human rights”, this summer called for a ban on all Israeli products from eastern Jerusalem, Judea, and Samaria. “The international community must ban the import of all goods produced in illegal Israeli settlements and put an end to the multimillion dollar profits that have fuelled mass human rights violations against Palestinians,” Amnesty International declared on 7 June 2017.
That campaign, Israeli officials warned shortly thereafter, violates anti-BDS legislation passed by the Knesset in 2011, making the offenders like Amnesty International liable for financial sanctions. In July 2017, Finance Minister Moshe Kahlon pledged to use “every means we have, including revoking tax benefits” to punish Amnesty over its anti-Israel campaign.” The Finance Ministry is poised to impose sanctions on Amnesty International’s Israel branch, formally declaring it in violation of the anti-BDS law, ending the tax exemption on donations to the group, and leaving it vulnerable to lawsuits by companies that have been impacted by boycotts or bans. (Reuters)

The boycott, divest, and sanction (BDS) movement seeks to cut economic ties with Israel, Since its beginnings a decade ago, BDS has never been invoked against any other country. Common sense and decency asks how a self-described "human rights" movement can single-out the only democracy in the region, while ignoring the brutal treatment of women and minorities in countries such as Saudi Arabia, Iran and Pakistan. Almost everything the Nazis said about the Jews is said today by BDS supporters about Israel. There is a worldwide struggle today against the very existence of one country of the all countries in the world. Not N. Korea. Not Iran. Not Sudan. Only Israel.

ARGENTINA TURNS OVER TENS OF THOUSANDS OF HOLOCAUST DOCUMENTS TO ISRAEL:

President Mauricio Macri of Argentina gave Israeli PM Netanyahu tens of thousands of documents about World War II, some of them related to Nazi war criminals. Digital copies of the documents were delivered 12 Sept. 2017, in a box with five discs totaling 5 terabytes of information. “I gave to the prime minister a historic Argentinean documentation digitalized about the Holocaust for the use of the State of Israel to investigate and spread the information. This is very important for us,” Macri said in Buenos Aires at the first-ever formal meeting between the leaders of both countries. The documents will clarify the help that Argentina, which stayed neutral for much of World War II before joining the Allies, provided to Nazi criminals. The country was a postwar refuge for Nazis: including Adolf Eichmann captured in 1960. Macri at the meeting with Netanyahu said Argentina will work “together with Israel and our allies against terrorism.” Netanyahu thanked “my friend Mauricio.
Netanyahu also spoke of Iranian terrorism and the nuclear threat. “They have a terror machine that encompasses the entire world, operating terror cells in many continents, including in Latin America,” the Israeli leader said. Addressing the world powers’ 2015 nuclear deal with Iran, he said, “I’ll be straightforward. This is a bad deal … either fix it or cancel it. That’s the Israeli position,” he said. Next week, Netanyahu will meet President Donald Trump on the sidelines of the UN General Assembly in New York. (J.Post)

The UN Security Council on 10 Sept. 2017, unanimously imposed new sanctions on North Korea. The new sanctions ban textile exports and restrict shipments of oil products and come in response to Pyongyang’s sixth and largest nuclear test. With backing from China and Russia, the council voted 15-0 to support the USA-drafted sanctions resolution just one month after banning exports of coal, lead and seafood in response to North Korea's launch of an intercontinental ballistic missile. The measure is the eighth series of sanctions imposed on North Korea since it first tested a nuclear device in 2006. On 10 Sept. 2017, North Korea threatened it would inflict "the greatest pain and suffering" on the United States if Washington persists in pushing for harsher UN sanctions on the isolated country.(INN)

Egyptian Defense Minister Sidki Sobhi told his South Korean counterpart during a recent visit to Seoul that Cairo had "already severed all military ties with North Korea." Egypt has for decades maintained close ties with North Korea, which has sold weapons to Egypt and upgraded its arsenal of medium-range, ground-to-ground missiles. (AP)

A top deputy to PM Netanyahu on 11 Sept. 2017, said the Israeli leader must push President Donald Trump to freeze, change or cancel the international community’s nuclear deal with Iran during an upcoming trip to the United States. Yisrael Katz, Israel’s minister for intelligence and strategic affairs, told a security conference in the central Israeli city of Herzliya this week that changing the deal should be Netanyahu’s “primary mission.” Netanyahu is expected to meet with Trump next week on the sidelines of the UN General Assembly. Katz said the world’s failed attempts to negotiate a halt to North Korea’s nuclear program provides a lesson. “Iran is the new North Korea,” he said. “We need to act now so we won’t be sorry tomorrow about what we didn’t do yesterday.”
The deal offered Iran relief from international sanctions in exchange for curbs on its nuclear program. Israel has repeatedly claimed the deal will not prevent Iran, its archenemy, from developing a nuclear weapons capability. On the campaign trail, Trump repeatedly criticized the nuclear agreement as a bad deal. His administration has faced two 90-day certification deadlines to state whether Iran was meeting the conditions needed to continue enjoying sanctions relief under the deal and has both times backed away from a showdown. But Trump more recently has said he does not expect to certify Iran’s compliance again. The next deadline is in October. (Washington Times)

For the first time since the Temple stood in Jerusalem, the sounds of shofarot (ram horns) from Jacob’s Sheep were heard in Israel, trumpeting out from the mountains of Naftali, in a powerful chorus that may soon be announcing Messiah in the far corners of the world. A small ceremony was held in Ramot Naftali near the Lebanese border on 10 Sept. 2017 to inaugurate the Jacob’s sheep shofarot. The sheep have not existed in Israel since Biblical times. The breed derives its name from the unique dark spots that correspond to the story of Jacob and Laban. The ceremony was a bittersweet celebration. After struggling many years to overcome bureaucratic hurdles and practical obstacles, Gil and Jenna Lewinsky finally succeeded in bringing their flock of 119 sheep from Canada to Israel last year. Despite succeeding in this daunting task, the couple’s trials were still not over when they landed in Israel. Two months ago, many of the sheep contracted Bluetongue Disease. Mortality from the disease can run as high as 90%.

​From the Lewinskys’ herd, 48 sheep died, leaving the couple with slightly more than half their original herd. Remarkably, the young lambs born the month before, normally the most susceptible to the disease, were all spared. “It was so sad to lose so many rams,” Jenna said. “But sometimes, that is the way God brings joyous blessings into the world: through sadness and suffering.” The blessing came in the form of the horns of the dead rams. Jacob’s Sheep are unique in that the rams each have four horns from which to make shofarot, rather than just two. After having 34 horns prepared and made into shofarot, the Lewinskys offered them for sale at $500 each. Within 24 hours, every single shofar was purchased. (WND)