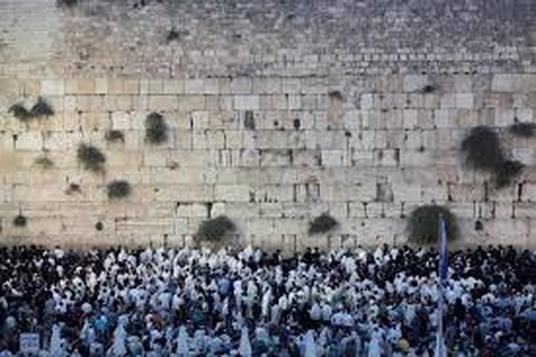 Of the non-commanded biblical feast and fast days commemorated in Judaism, Tisha b’Av is the most somber. It is literally translated as the ninth day of Av, which is the fourth month in the Jewish calendar. It is a day of mourning, fasting and remembering the many tragedies experienced in Jewish history. One calamity is recorded in the book of 2 Kings, chapter 25, which details the horrors of the conquest of Jerusalem by the Babylonians under Nebuchadnezzar II. Following a lengthy siege on the capital, the city walls were breached, the Temple erected by King Solomon was plundered, ransacked and set ablaze. Officials and priest were killed as well as countless other Jews. Many thousands who escaped the genocide were taken captive by the Babylonians, bringing an end to the Davidic Empire and beginning the first exile out of the Promised Land. A later event allocated to the ninth of Av is the destruction of the Second Temple at the hands of the Romans in the year 70 A.D. The place of worship had been erected under the instruction of Cyrus the Great as described in the books of Ezra and Nehemiah. On the day of the fast, all food and the drinking of all liquid is forbidden. No bathing or makeup is allowed. There are evening services and the book of Lamentations is read. Tisha b’Av fell on 1 August this year. And was observed from sunset Monday until sundown on Tuesday. (Kehila News)

More than 1,000 Jews ascended the Temple Mount on Tues. 1 August 217, during the annual Tisha B’Av fast, commemorating the destruction of Jerusalem and the Temple nearly 2,000 years ago. Unlike Muslim visitors to the Mount, who are permitted to pray at the holy site and are not required to undergo any security check to enter, the Jewish visitors were required to pass through metal detectors, submit to security searches, and agree not to engage in prayer while visiting the Temple Mount. Special magnetometer metal detectors had been placed at all entrances to the Temple Mount last month, following the 14 July 2017 murder of two Israeli Border Police officers by a trio of Israeli-Arab terrorists near the Temple Mount. After less than two weeks, Israel removed not only the metal detectors, but also security cameras, following violent protests and a wave of terror attacks. While over 1,000 Jews were permitted to ascend the mount Tues. morning, hundreds more waited in line for hours at the entrance. (Arutz-7)

Tensions have partially dissipated in Jerusalem and Judea & Samaria, following a weekend of clashes between Muslim worshipers and Israeli security forces over the ongoing Temple Mount/Al-Aqsa Mosque crisis. Palestinian leaders warned that the conflict was not yet over, however, despite Israel having removed metal detectors and other security infrastructure placed at the compound in the aftermath of an attack by three Israeli Muslims that killed two police officers. While Islamic religious leaders ended a two-week boycott of the complex on 27 July 2017, they nevertheless complained of new restrictions barring entry to those less than 50 years old; a move implemented by Israeli authorities meant to prevent the likelihood of further violence. For its part, the White House described the prevailing conditions in Jerusalem’s Old City as “contained,” a sentiment echoed by Israeli Defense Minister Avigdor Liberman, who also reiterated that his government “acted correctly” during the ordeal. (Medialine)

WHY DID ISRAEL REMOVE THE METAL DETECTORS?

It is ludicrous to view metal detectors as a threat to freedom of Islamic worship, or a change to the status quo at the holy site. Nevertheless, Israel's defense establishment recommended removing the metal detectors. Why? Right now, Israel's enemies across the Middle East are busy fighting one another. Israel remains outside of the combat arenas. In the wider perspective, Israel's interest is not to enter into a new conflict. Israel has no interest in uniting the Islamic world against it. (Ynet)

The Palestinian Authority is offering cash and other incentives to Arab residents of Jerusalem to encourage conflicts in the Israeli capital and violent attacks against Israeli security forces, media sources reported on 31 July 2017. Among the benefits being offered by the PA are cash payments of $1,000 a month for up to three months. According to the report, the cash payments have been offered to all employees of the Waqf, the Islamic trust which manages the Temple Mount, as well as all Arab merchants in the Old City of Jerusalem. The PA has also promised to cover tuition for Arab college students in the Old City who participate in anti-Israel riots. In addition, PA Chief Mahmoud Abbas has invested millions of dollars preparing local Arab hospitals for future clashes with Israeli security forces and refurbishing Arab-owned properties in Jerusalem. The grants are intended to cover damages, expenses, and other losses of local Arabs incurred by continued rioting. Abbas has also promised citations and awards for the most active rioters. Rioting began in and around the Old City of Jerusalem after three Israeli-Arab terrorists murdered two Israeli Border Police officers near the Temple Mount on July 14th. (Arutz-7)

PALESTINIAN AUTHORITY NOW USES HALF OF ALL FOREIGN AID TO REWARD TERROR:

The new PA budget has boosted support to terrorists in prison by 13% and aid for the families of those killed “in the struggle against Zion” by 4%, reports the Institute for Contemporary Affairs. The total, $344 million, equals 49.6% of all foreign aid to the PA. In other words, cash from the USA, and Europe is subsidizing “welfare for terrorists.” The PA pays a salary to each Palestinian imprisoned for an attack on Israelis, hitting over $3,000 a month after 30 years. Other stipends go to families of “martyrs” killed in the act. That’s $344 million for 2017 that’s not going to build roads or hospitals. Knowing that you or your family will be taken care of is a clear incentive to kill. That’s why President Trump is threatening to end USA aid if the PA doesn’t quit it. The PA budget is a clear “no” to Trump’s demand. (NY Post) On 3 May 2017, Palestinian Authority chairman Mahmoud Abbas said in a meeting with USA President Donald Trump: “Mr. President, I affirm to you that we are raising our youth, our children, our grandchildren on a culture of peace.”

German police said Saturday 29 July 2017 that a Palestinian born in the UAE, who killed one person and wounded five others with a knife in Hamburg, was known to them as a recently radicalized Islamist. The man's application for asylum had been rejected and he was in the process of being deported, officials said. The attacker is said to have screamed 'Allahu Akbar' before running into a supermarket where he stabbed one person and slashed at five others while trying to flee. Passers-by threw chairs and other objects at him, allowing police to arrest him. German media published a photo of the attacker in the back of a police car with a white blood-soaked bag over his head. (UK Daily Mail/Express)

HEZBOLLAH YOUTH SWEAR ALLEGIANCE TO IRAN’S KHAMENEI:
​
If it wasn’t clear already, a video posted on 29 July 2017 by the Iranian news agency Tsanim emphasized the direct connection between the Lebanon-based Hezbollah terrorist group and the Ayatollah regime in Iran. The video shows for the first time Hezbollah operatives swearing allegiance to Iran's Supreme Leader Ayatollah Ali Khamenei during the Shi'ite celebrations at Ruhollah Khomeini‘s tomb - the founder of the Islamic Republic. The Iranian Supreme Leader's website also published the video, stating, "In the spirit of divine victory achieved by the arms of the resistance, we publish for the first time a video of Lebanese youth at Khomeini's grave singing in a chorus in the presence of Khamenei." (J.Post)