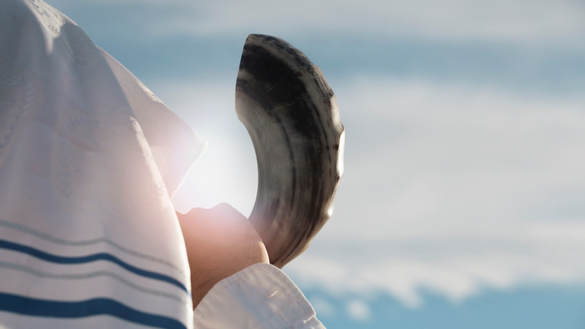 With the festivities of Rosh Hashana behind us, we have completed five of seven appointed times, or convocations, of the biblical calendar. The sixth one, Yom Kippur, begins at sundown on Friday 29 Sept. 2017. Unlike the other six feasts, this one has a unique character that sets it apart from all the other commanded days of the Lord. It is the most somber of them all - the Day of Atonement. As suggested by the various meanings of its name, the day emphasizes mercy, pardon, cleansing and forgiveness of sins. Many people use what is known as the 10 days of awe - the time from the Feast of Trumpets through Yom Kippur - to pursue reconciliation between their fellow man and God. In a surreal phenomenon, hard to imagine but typical of the day’s somber mood, Israel comes to a virtual stop. From midday on the eve of the holy day both public and private transportation wind down including planes. No aircraft lands or takes off for the duration of the holy day. All restaurants, supermarkets, businesses and places of entertainment shut their doors. Once people get home, they will not use their vehicles until the following sunset.

​Then, the roads become an open playground. Thousands of children and even adults cycle and push strollers freely on streets and highways. It is traditional to dress in white. Rabbinic instruction for this day forbids brushing teeth, bathing, applying any lotions or oils to the body, wearing leather and engaging in sexual relations. Most men will spend the whole day in the synagogues praying and reciting liturgy. Ambulances and emergency vehicles are on alert for biking accidents and medical emergencies including child birth, dehydration or low blood sugar. Messianic Jews in Israel may gather at their congregations across the country to fast and pray in solidarity for the nation. (Kehilah News)

NEW DISCOVERIES IN JERUSALEM POINT TO FULFILLMENT OF BIBLICAL PROPHECIES:

Jonathan Feldstein, an Orthodox Jew living in Israel, says visitors must experience the City of David and see the fulfillment of Isaiah’s prophecy. In Isaiah, he said, "Therefore, thus says the Lord concerning the king of Assyria: He shall not come into this city, nor shoot an arrow there, nor come before it with shields, nor build a siege ramp against it." The prophecy was made true as archaeologists have not found any Assyrian arrows - only arrows from the Babylonian and Roman periods. “It was awesome seeing actual spots at which biblical kings were anointed and where pilgrims prepared to ascend to the temple, providing a vivid depiction that's unparalleled and transforming,” Feldstein said. Feldstein added that he learned on his visit that “there is no more significant place in Jerusalem” than the City of David. “It underscores 3000 years of unbreakable Jewish history as well as the foundation on which Christianity was born,” he said. (Koenig)

“Mosab Hassan Yousef, the son of Hamas founder Sheikh Hassan Yousef, stunned the Palestinian delegation to the UN Human Rights Council this week when he called out the PA's human rights abuses of their own people. The PA delegation reacted with shock as Hassan Yousef calls the PA the “greatest enemy of the Palestinian people,” in a video posted by UNWatch. “If Israel did not exist, you would have no one to blame,” he declared. (Arutz-7)

WHO IS MOSAB HASSAN YOUSEF?

Mosab Hassan Yousef – the “Green Prince” – who worked as an Israeli spy, said in the past, “The Jewish nation is dear to me and when I see nations fighting against the Jewish people it hurts me.” Yousef, the son of Hamas leader Sheikh Hassan Yousef, helped the Shin Bet (Israel Security Agency) thwart attacks from 1997 to 2007. He later wrote an autobiography published in 2010 titled Son of Hamas. He converted to Christianity and fled to the USA where he was granted political asylum. He explained that he was raised to believe that Jews are the enemies of humanity and the Palestinians. However, he continued, that was “until I came to experience what the Jewish nation is, the true democracy in the ocean of darkness.” Yousef recounted how he had witnessed a Palestinian mother send her five children on suicide attacks and how she would bless each one. The collective mind of society is representing something, an ideology, a culture, a state of consciousness that is stuck in the 6th and 7th centuries in a tribal lust for power, he said.

“We can fool ourselves but there is an Islamic problem,” he continued, going on to mention terrorist groups such as Hamas, Hezbollah and ISIS. “All of them are killing in the name of Allah,” he said, adding that other religions do not act in such ways. “Humanity needs to stand against this danger. Islam is a belief system and the world should unify against it just as it did against Nazism. The Jewish people were able to overcome the Holocaust and instead of playing the victim card, built a democratic state, which sets a great example," concluded Yousef. “I came from hell,” and “I love what Israel stands for.” (J. Post)

Interpol has voted to admit Palestine as a full member, dealing a diplomatic blow to Israel which lobbied against Palestinian admission. In a secret vote of the international police organization's members in China, Palestinian membership was approved by 75 to 24, with 34 abstentions - exceeding the two-thirds requirement of yes to no votes. It was a painful loss for Israel in particular, after it pushed against Palestinian acceptance both on technical and substantive grounds, arguing that the Palestinian Authority did not meet Interpol’s requirements to qualify as a state. Under the 1993 Oslo peace agreement between Israel and the Palestine Liberation Organization, the Palestinian Authority was granted limited self-rule in Judea & Samaria and the Gaza Strip. In 2012, the UN General Assembly elevated the Palestinian Authority’s observer status from “entity” to “non-member state,” similar to the Vatican. Israel argued that Palestinian inclusion in Interpol would endanger Israeli military officials and politicians, who could face arbitrary international arrest orders, and would put at risk classified intelligence shared among the organization’s 192 member states, allowing it to be transmitted to Palestinian terrorists. (Guardian-UK/LA-Times)

FATAH PRAISES HAR ADAR TERRORIST:
​
Nimer Mahmoud Ahmed Aljamal, the terrorist who murdered three Israelis in an attack at the entrance to the Jewish town of Har Adar Tues. morning, 26 Sept. 2017 was praised as a 'Martyr' by Palestinian Authority chairman Mahmoud Abbas' Fatah movement on its official Facebook page. Fatah's Facebook page featured a picture of Aljamal with a caption praising him, glorifying him, and expressing its condolences to his family. The PA Ministry of Health claimed that Aljamal died because he was shot by 'occupation forces' neglecting to mention that he had killed three Israelis. "The Ministry of Health officially announces the martyrdom of a citizen after the Israeli occupation forces shot him, northwest of Jerusalem," the PA Health Ministry wrote on its Facebook page. Maor Zemach, chairman of the Lach Yerushalayim movement, who translated the post praising the terrorist, said: "The Fatah movement, headed by Abu Mazen, continues to incite and glorify terrorists. This is a reality that the State of Israel must fight against. It is insane to think that only this week the Palestinian Authority, which supports terrorist murderers, was allowed to join Interpol." (Arutz-7)

SAUDI ARABIA FINALLY LETS WOMEN DRIVE:
​
King Salman issued a historic royal decree 26 Sept. 2017 granting Saudi women the right to drive after being banned for years. The change is expected to take effect in June 2018. While there is no official law that forbids women from driving, a longstanding religious ban has prohibited it for decades. Up until now, Saudi Arabia was the only country in the world that didn’t allow women to get driver licenses. Saudi clerics ultimately believe female drivers “undermine social values” and lack the “intellect” to navigate the nation’s roadways. “Would you give a man with half an intellect a driving licence?” Sheikh Saad al-Hajari, head of the Saudi government’s religious edict authority, alleged at a lecture earlier this month. “So how would you give one to a woman when she has half an intellect?” he said. “And if they go out to the market this gets halved again! So they now have a quarter of an intellect.” Saudi officials said a “high-level committee” of ministries - including internal affairs, finance, labor and social development - would be coming together to study the necessary arrangements for enforcement. They are expected to report within 30 days. (NY Post)