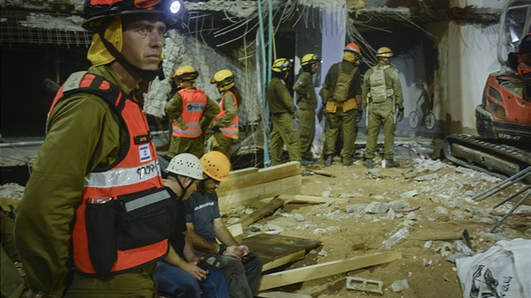 ​NETANYAHU: ISRAEL HELPS BECAUSE WE ARE A LIGHT UNTO THE NATIONS:

During a ceremony welcoming Christian media representatives to Jerusalem, PM Benjamin Netanyahu was asked why Israel goes so far out of its way to provide aid to disaster victims around the world. From Haiti to Nepal to Japan to Mexico, Israel is almost always the first on the scene following major catastrophe, and more often than not sends one of the largest and best-equipped delegations, despite being so much smaller than many of the other nations who send aid. In response to the question, Netanyahu cited the Bible: "Because we're a light unto the nations. That's the great fulfillment of that great prophecy, and in fact what Israel is doing. And the people say, 'well, what is it that you get out of it?' And the answer is we're not getting out of it anything, we're fulfilling our deepest values – Israel is a light unto the nations." (Israel Today)

Americans have little faith in the Joint Comprehensive Plan of Action (JCPOA), the 2015 nuclear deal with Iran negotiated by the Obama administration. According to a new Harvard-Harris poll, Americans – including a majority of Democrats – are unsatisfied with the deal and believe Iran is not keeping its end of the agreement. “Americans see Iran as a bad actor on all fronts and substantial majorities believe this agreement is being violated and never should have gone into effect without a Senate vote,” said Harvard-Harris co-director Mark Penn. Sixty percent of all voters say the JCPOA was a bad deal for the USA, while two-thirds agree Iran has not complied with the agreement. Half of Democratic respondents agreed that Iran had not fulfilled its side of the agreement. More than two-thirds (70%) say the JCPOA should be renegotiated and verified by Congress. Broken down by partisan affiliation, 85% of self-described Republicans say the deal should be renegotiated, along with 71% of independents, and 57% of Democrats. About four-fifths (81%) believe that a new agreement should be require approval by the USA Senate, like all official treaties. The survey was conducted from 14 Oct. 2017 to 18 Oct. 2017. (Arutz-7)

Prof. Moshe Maoz, an expert on Syria and Hezbollah from the Political Science Department at the Hebrew University, said on 22 Oct. 2017, he believes four rockets from Syria which exploded in the Golan Heights on the previous day were accidental spillover from the Syrian civil war. He added, however that "in strategic terms, the great danger is from Syria as an important link of the Shiite axis that is being led by Iran, and this is Israel's greatest enemy. This axis potentially includes Iraq, Lebanon-Hezbollah and Yemen. There is a danger the Iranians may provoke us in the future. This is where a third factor comes in to play, and that is the Russians who control the skies of Syria. They have agreements and disagreements with the Iranians and the question is what they will do, mainly because they have the means to prevent Israeli flights and bombings. There appears to be an understanding between the Russians and us, and they allow us to hit Hezbollah's weapons convoys, but if it spreads further, it will be considered a blow to the Russian honor.

"Beyond that, they have modern means to prevent our airstrikes,” noted Maoz. “They have S-400 systems, beyond the S-300s they provided to the Iranians, which they can use to prevent and intercept any aircraft coming from Israel. This is the most critical point, and it is no coincidence that Netanyahu has been to Russia six or seven times in recent months. Moreover, the Americans are not helping, Trump has given up on Syria and Russia is the potential ruler in this region. We're in a pretty delicate state of affairs. The Russians will not forcefully prevent the Iranian presence in the region, it is not in their interest, and they do not want to do so," he said, adding, “The question is the level of coordination between them. That's a very critical question.” (Arutz-7)

USA Secretary of State Rex Tillerson this week promoted a Trump administration goal of uniting Saudi Arabia and Iraq in common cause to counter Iran’s growing assertiveness in the Middle East. Tillerson participated in the inaugural meeting of the Saudi Arabia-Iraq Coordination Committee, along with Saudi King Salman and Iraqi Prime Minister Haider al-Abadi, telling the leaders that the event highlighted the improving ties between the longtime rivals and showed “the great potential” for further cooperation. He noted the August 2017 reopening of a major border crossing and the resumption of direct flights between Riyadh and Baghdad. The United States is “grateful for this progress and urges you to expand this vital relationship for the stability of the region,” Tillerson said. His participation in the meeting comes as USA officials step up encouragement of a new axis that unites Saudi Arabia and Iraq as a bulwark against Iran’s growing influence from the Persian Gulf to the Mediterranean Sea. (AP)

LESS THAN 5% OF SYRIA UNDER ISIS CONTROL, RUSSIA SAYS:

Russia's defense minister says less than 5% of Syria remains under control of the ISIS group. At the height of the rise of the ISIS, the terrorist group controlled about half of the territory of Syria before their downfall began. Speaking at a conference in the Philippines, Sergei Shoigu said on 23 Oct. 2017 that "terrorists" controlled more than 70% of the country before Russia launched its air operation at the end of 2015 to support President Bashar Assad's offensive against ISIS terrorists and opposition forces. In recent weeks, Russia focused efforts on the east of the country where a race is underway between USA-backed Syrian forces and government troops in the oil-rich Deir el-Zour province. (Ha’aretz)

Thousands of foreign fighters who flocked to fight with ISIS in its Syrian and Iraqi strongholds have returned to their home countries as the terrorist group’s territory shrink. The report, released Tues. 24 Oct. 2017 by the New York-based firm The Soufan Group, said “there are now at least 5,600 citizens or residents from 33 countries who returned home” in a situation that “represents a huge challenge for security and law enforcement entities” around the world. Whether those returning fighters will present a threat in their homelands has become a major source of concern for security and intelligence officials in governments across the Middle East, Europe, Asia and North America. Despite its losses on the battlefield, ISIS remains a potent threat, the Soufan Group report said. As ISIS “loses territorial control of its caliphate, there is little doubt that the group or something similar will survive the worldwide campaign against it so long as the conditions that promoted its growth remain,” the report said. “Already its propaganda has cast the eradication of its territorial control in Syria and Iraq as unimportant, and merely a temporary setback in its preordained journey to victory; and it has promised more attacks in the West.” (Washington Times)

Anti-Semitic fliers with swastika-like symbols were discovered on the campus of Cornell University in upstate New York. The posters, which read “Just say no to Jewish lies!” and urged students to “join the white gang,” were discovered Monday morning 23 Oct. 2017, and taken down the same day. The Ivy League school’s president, Martha Pollack, denounced the fliers. “Whoever is responsible for these fliers is hiding under the cover of anonymity, having posted them overnight,” she said. “Whoever they are, they need to ask themselves why they chose our campus, because Cornell reviles their message of hatred; we revile it as an institution, and I know from many personal conversations that thousands of Cornell students deplore it individually.” Police were investigating the matter and increasing patrols around Jewish buildings on campus, the Cornell Hillel said in an email to the Jewish community. “We are deeply concerned that a poster of this nature was placed on our campus, as these sentiments run counter to the spirit of diversity and pluralism that our university works to uphold,” Hillel Executive Director Rabbi Ari Weiss said in a statement. (JTA) Pray against the influence and activities of university anti-Semitic groups, students and staff members.

MARYLAND JOINS NEARLY HALF OF AMERICAN STATES WITH ANTI-BDS LAWS: