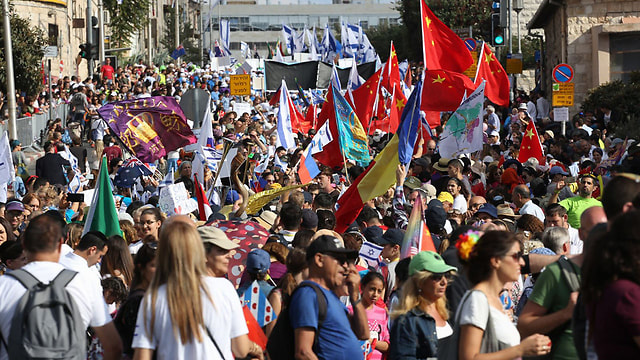 Tens of thousands of participants from 80 different countries took part Tues. 10 Oct. 2017, in the annual march in Jerusalem marking the 50th anniversary of the city's unification. As participants gathered to start the march, Jerusalem Mayor Nir Barkat welcomed one and all. Israeli tourists, IDF soldiers, representatives of the security and rescue forces, street artists, dancers, musicians and dozens of groups representing public bodies were seen walking side by side. "I came because I love Israel," said Jenny from the United States. "This is my 20th trip here. We are happy to do things for Israel. It's an amazing country." "I'm a Christian but I feel connected to Israel," said Marissa from Catalonia. "I do not know how to explain it, but I feel very close to it. All Christians feel that way.” “The Jerusalem march is a tradition which lasted for more than 60 years. Every year it is exciting again, though as this year we celebrate 50 years of unification it is even more exciting than ever," said Mayor Barkat. (Ynet)
“Yes, many peoples and strong nations shall come to seek the Lord of hosts in Jerusalem, And to pray before the Lord.” Zech 8:22

An Israeli philanthropist has made a six-figure grant to a hospital in northern Israel to fund treatment for Syrian children who have suffered hearing loss as a result of their country’s civil war. Morris Kahn’s pilot grant to Ziv Medical Center in Tzfat is part of the Genesis Prize Foundation’s global initiative to aid refugee causes and encourage other Jewish foundations and philanthropists to do the same. According to Genesis, Ziv Medical Center has extensive experience treating wounded Syrian civilians. The hospital reports that one out of every three Syrian children from combat areas examined by Ziv’s hospital staff suffers from hearing loss. The children are provided testing, treatment, surgery and rehabilitation. “We have treated more than 1,000 Syrians of all ages who needed our help over the past four years,” Salman Zarka, director of Ziv Hospital. “It’s really important for me as a physician, as an Israeli, and as a human being.” Kahn is a South African-born businessman and philanthropist who moved to Israel in 1956. He is the founder of the Coral World Underwater Observatory in Eilat and of Zalul, a nonprofit focused on cleanup and preservation of the seas and rivers in Israel. (Arutz-7)

Israel is still officially at war with Syria. Yet Israel has been quietly treating Syrians injured in Syria’s civil war. Syrian officials secretly transport those in need of immediate care. Israel treats Syria’s injured free of charge. An Israeli official said, “For us they are patients who need immediate help or they will die. It makes no difference whether they’re enemy combatants or civilians.” How can Israel treat the cruelest of their enemies with such great kindness? The Israelis respond, “It’s part of our tradition and our value system based on our Torah (Bible).”

MEXICAN PRESIDENT THANKS ISRAEL FOR QUICK HELP IN THE WAKE OF EARTHQUAKE:

Mexican President Enrique Peña Nieto thanked PM Benjamin Netanyahu during a telephone call on Tues. 10 Oct. 2017, for the Israeli search and rescue team sent to Mexico City last month following a devastating earthquake there. Nieto expressed appreciation for the way in which Israel quickly mobilized and sent the team to help deal with the after-effects of the 7.1 magnitude earthquake that killed more than 300 people. The earthquake hit on 19 September 2017 and the Israeli team was the first foreign group to give assistance, arriving on the scene just two days later. The team was made up of some 71 soldiers from the army’s Home Front Command. It focused on trying to extricate trapped survivors and on surveying public buildings to determine whether they needed to be demolished after the earthquake or were still structurally sound. When Netanyahu greeted the team upon its return on 28 Sept. 2017, he told the soldiers they were “the long arm of Israel, the long humanitarian arm that reaches around the world, across thousands of kilometers, and you show the true face of the State of Israel.” (J.Post)

Israel's CorNeat Vision has completed the design and development stage of its artificial cornea implant. Following successful trials in rabbits, the company is initiating formal biocompatibility and safety tests toward first implantation in humans by mid-2018. The implant is a synthetic cornea that utilizes advanced cell technology to integrate artificial optics within resident ocular tissue. CorNeat Vision CEO Almog Aley-Raz said, "Corneal pathology is the second leading cause of blindness worldwide with 20-30 million patients in need of a remedy and around 2 million new cases each year. Though a profound cause of distress and disability, existing solutions, such as corneal transplantation, are carried out only about 200,000 times each year worldwide. There exists an urgent need for an efficient, long-lasting and affordable solution to corneal pathology, injury and blindness, which would alleviate the suffering and disability of millions of people." (Globes)

GERMAN INTELLIGENCE: IRAN ATTEMPTED TO BUY NUCLEAR TECHNOLOGY ILLEGALLY 32 TIMES:
​
Iran tried to obtain illicit technology that could be used for military nuclear and ballistic missile programs, raising questions about a possible violation of the 2015 agreement intended to stop Tehran’s drive to become an atomic armed power, according to a German intelligence report from three different German Intelligence sources. The report reveals that Iran made 32 procurement attempts in the German state of North Rhine-Westphalia in 2016 - after the Iran deal was implemented - "that definitely or with high likelihood were undertaken for the benefit of proliferation programs." The report lists Iran as a nation that engages in proliferation, which is defined as “spreading atomic, biological or chemical weapons of mass destruction.” Missile delivery systems are also included in the definition of illicit proliferation activity in the report. Iran was accused of using front companies in the UAE, Turkey and China to circumvent international restrictions on its nuclear and missile programs. (Fox)

‘HEZBOLLAH DETERMINED TO GIVE ITSELF OPTION TO ATTACK AMERICA’:

The United States on Tues.10 Oct. 2017, announced multi-million dollar rewards for two senior members of the Hezbollah terrorist group. Reports said the State Department would offer a reward of $12 million to anyone with information leading to the discovery, arrest, or charge of the two. The State Department's Counterterrorism Bureau said it would give $7 million and $5 million, respectively, for information leading to the capture of Talal Hamiyah and Fuad Shukr. An informational leaflet described Hamiyah as the head of the organization's External Security Organization, its "element responsible for the planning, coordination, and execution of terrorist attacks outside of Lebanon." Shukr was described as a senior operative who played a central role in planning and carrying out the 1983 bombing of a USA Marine Corps barracks in Beirut that killed 241 American service personnel. Nicholas J. Rasmussen, the director of the National Counterterrorism Center, said that the USA believes that Hezbollah is determined to give itself an option to carry out attacks inside the United States. Hezbollah is blacklisted as a terrorist organization in the United States, which regularly sanctions members of the group. (Arutz-7)

A diplomat from Qatar is the leading contender to head UNESCO, the UN's cultural agency, it was reported on 10 Oct. 2017. Qatari diplomat Hamad bin Abdulaziz al-Kawari is leading after two rounds of voting to pick the next head of the UN's cultural body, according to the news agency. France's Audrey Azoulay, a former culture minister like al-Kawari, came in second place among the six candidates and is still in the running to replace outgoing UNESCO director-general Irina Bokova. The news was a mixed bag for Israel, which has been nervous about Kawari’s candidacy, believing him to be anti-Semitic. UNESCO is notorious for its anti-Israel bias, and it infuriated Israel and the United States by granting full membership to “Palestine” in 2011. In addition, the agency has passed a series of anti-Israel resolutions, including ones declaring the Old City of Hevron to be an “endangered Palestinian heritage site”, as well as resolutions which bluntly ignore the Jewish connection to the city of Jerusalem. This week, however, Israel scored a victory at UNESCO, as its board was set to meet and, for the first time since April 2013, not vote on any anti-Israel resolutions. (INN)

It's becoming increasingly difficult to describe Israel as an "apartheid state" when a firm majority of Arabs say they actually prefer life in the Jewish state. And the Arab respondents in yet another survey on the matter are saying just that. Conducted by the Konrad Adenauer Program for Jewish-Arab Cooperation Center at Tel-Aviv University, the survey asked local Arab residents how they personally view the State of Israel. A firm 60 percent majority of Arabs overall said they hold a favorable view Israel, while only 37% described their view as unfavorable. Among Arab Muslims, the view was 49%-48% in favor, and among Christian Arabs the view was 61% in favor. Nearly all Druze (94%) said they view the State of Israel favorably. An overwhelming 63% majority said Israel is a good place for Arabs to live. (Israel Today)

​Arab Israelis are citizens of the Jewish state with equal rights. In 1948, Israel's Declaration of Independence invited Arab inhabitants of Israel to "participate in the upbuilding of the State on the basis of full and equal citizenship and due representation in all its provisional and permanent institutions." Additionally, Israel remains one of the few nations in the Middle East where all women enjoy full equality and personal freedoms, including the right to vote and be elected to local and national office.