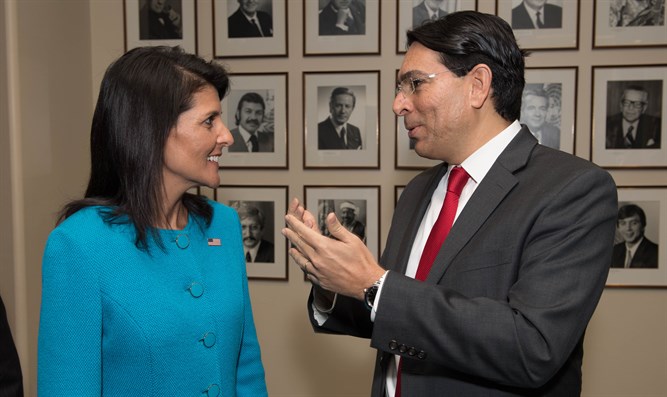 VICTORY FOR ISRAEL IN THE SECURITY COUNCIL:

Israel’s Ambassador to the United Nations, Danny Danon, on Wed. 30 August 2017, welcomed the adoption of a new UN Security Council resolution regarding the mandate of the United Nations Interim Forces in Lebanon (UNIFIL). UNIFIL is now required to expand its reports to the Security Council and take deliberate action against Hezbollah’s violations. UNIFIL’s presence on the ground will increase significantly, and troops will be required to tour the Hezbollah-controlled areas of southern Lebanon. UNIFIL must also report all instances of Hezbollah’s violations and attempts to deny access immediately. "This is a significant diplomatic achievement that could change the situation in southern Lebanon and expose the terror infrastructure that Hezbollah set up on the border with Israel," Danon said on Wednesday.

The resolution requires UNIFIL to open its eyes, and forces it to act against Hezbollah's terror buildup in the area. Until now, and especially in the last few years, UNIFIL forces have rarely patrolled the area in southern Lebanon, refrained from entering villages widely agreed to be Hezbollah terrorist strongholds, and failed to report Hezbollah’s violations. As such, from now on, UN forces will be required to demonstrate a robust physical presence on the ground, to enter every village and to report, in real time, Hezbollah’s violations of Security Council Resolution 1701, negotiated by then Foreign Minister Tzipi Livni to end the Second Lebanon War, and ignored by Hezbollah ever since. (Arutz-7)

A senior Israeli official has issued a warning to Russia that the Israeli military will bomb Syrian President Bashar Assad's palace in Damascus if Russia allows Iran to make military advances in Syria. The official added another caution in the Al-Hayat al-Jadida newspaper that if regional changes don't take place in the current advance by Iran, Israel will act to scuttle the Syrian ceasefire deal recently concluded by the USA and Russian governments in Kazakhstan. The warnings came during a meeting last week on the Black Sea between Israeli PM Benjamin Netanyahu and Russian President Vladimir Putin. Netanyahu told Putin, "Iran is already well on its way to controlling Iraq, Yemen and to a large extent is already in practice in control of Lebanon." He said Israel will act unilaterally if need be to halt Iran's influence in Syria and added, "We cannot forget for a single minute that Iran threatens every day to annihilate Israel." (Reuters/CBN)

ISRAELI CHIEF FOR MILITARY INTELLIGENCE WARNS ABOUT IRAN:
​
Major General Herzi Halevi, the head of the Israeli Military Intelligence Directorate, on 27 August 2017 met with visiting UN Secretary General Antonio Guterres. Halevi briefed the Secretary-General on the intelligence situation in various sectors, and explained, among other things, Iran's entrenchment in Syria and Hezbollah's power buildup in Lebanon. The head of Military Intelligence emphasized that Iran's desire to produce precision weapons for Hezbollah on Lebanese soil and in the Syrian military industry is a serious development to which Israel cannot remain indifferent. The head of Military Intelligence also noted that the Hezbollah terrorist group is tightening its grip on Lebanon and that there were serious and prolonged violations of UN Security Council Resolution 1701. The UN forces in Lebanon (UNIFIL), said Halevi, is an important part of the solution and could, by increasing pressure on Hezbollah, make its efforts to build up militarily more difficult. According to him, more can be done, and there should be action not only to preserve peace, but also to prevent the next war."The establishment of Iran and the Shiite axis in Syria, and the strengthening of Hezbollah in Lebanon are two processes that could lead to an undesirable escalation in the north," Halevi said.

Israel’s UN Ambassador, Danny Danon, who was also in attendance at the meeting, said, "Iran is developing a terrorist incubator in Syria and Lebanon and is trying to ignite a fire in the entire region. The United Nations must act to uproot the roots of Iranian terrorism and UNIFIL must cleanse southern Lebanon of all of Hezbollah’s terrorist activities." Danon called on the UN to take drastic measures to ensure peace and quiet along the northern border. "The State of Israel will not stand by while dangerous elements are building terrorist infrastructures in order to harm it," he stressed. Danon several months ago presented new information to the Security Council revealing that Hezbollah had established a series of outposts along the border with Israel under the guise of agricultural NGO “Green Without Borders”. (Arutz-7)

The Gaza head of the Palestinian Islamist movement Hamas said on 28 August 2017, it had increased its military capabilities thanks to newly improved relations with Iran. In a rare meeting with journalists, Yahya al-Sinwar said Iran was "the biggest supporter" of Hamas' military wing, the Ezzedine al-Qassam Brigades. Hamas is "developing our military strength in order to liberate Palestine," Sinwar said in response to a media question. Hamas has run Gaza since 2007 and received Iranian financial and military support for years before it was reduced following a falling out over the Syrian civil war. Sinwar said relations with Tehran had improved in recent months, with a delegation visiting Tehran. "The Iranian military support to Hamas and al-Qassam is strategic," he added, saying the relationship had "become fantastic and returned to its former era. Every day we build missiles and continue military training," he added, saying that thousands of people are working "day and night" to prepare for the next conflict. The Islamist movement, which is considered a terrorist organization by the United States and the European Union, has fought three wars with Israel since 2008, most recently in 2014. (Jerusalem Center for Public Affairs)

North Korea has fired a missile over Japan in a move Prime Minister Shinzo Abe called an "unprecedented" threat to his country and USA President Donald Trump said was an act of "contempt”. The missile, launched early on 29 August 2017, flew over Hokkaido Island before crashing into the sea. The UN Security Council held an emergency meeting later in response. North Korea has conducted a flurry of missile tests recently amid growing international unease. This is the first time it has fired a ballistic weapon over Japan. This latest launch appears to be the first of a missile powerful enough to potentially carry a nuclear warhead. Residents were told to seek shelter. (CNN)

Days after meeting a White House delegation to discuss restarting peace negotiations with the Palestinians, Israeli PM Netanyahu forcefully spoke out against a principal tenet of any likely agreement: the scaling back of Jewish settlements. At an event celebrating 50 years of Israeli settlements in Judea & Samaria, Netanyahu pledged this week that his government will never evacuate a single settlement. Addressing a large crowd, Netanyahu declared: “We are here to stay forever. There will be no more uprooting of settlements in the land of Israel. This is the inheritance of our ancestors. This is our land.”
Successive USA presidents have considered the settlements an obstacle to peace and have called for, at the least, a stop to their expansion. Although President Trump has been less critical than his predecessors, even he has said that further construction would be unhelpful. His remarks, Netanyahu underscored the risk Israel would face if it withdrew from Judea & Samaria - a central demand of the Palestinians, for whom the area represents a future independent state. “Samaria is a strategic asset for the state of Israel,” the prime minister said. “It is the key to our future, because from these high hills, the heights of Mt. Hatzor, we can see the entire country, from one side to the other.” (L.A.Times)

Israel’s transportation ministry tested the high-speed Jerusalem-Tel Aviv express train on Sunday 27 August 2017, some six months before the line’s expected opening to passengers in April 2018. The train was loaded with 1,200 tons of weight in order to test the newly constructed bridges and rails, and to strengthen and stabilize the concrete and tracks. The testing will continue over the next few weeks. “The high-speed train will ensure the status of Jerusalem and the ability for people to live there and to open businesses,” said Transport Minister Yisrael Katz. “It will completely change the relationship between Jerusalem and the rest of the country.” The high-speed train will reach speeds of up to 100 miles per hour, departing every 15 to 20 minutes in each direction during peak hours, and will cut the expected travel time down to 28 minutes. The train will accommodate up to 1,000 passengers. (Kehila news)

ISRAEL’S TIPS HELP INDIAN FARMER:
​
Karnataka, a state in southwestern India, has transformed 59,305 acres of drought-stricken land in Hunagund into a fertile green pasture, thanks to Israeli drip irrigation. As a result, come October 2017, 15,000 farmers will harvest their first monsoon season crop in several years. (Jerusalem Center For Public Affairs)