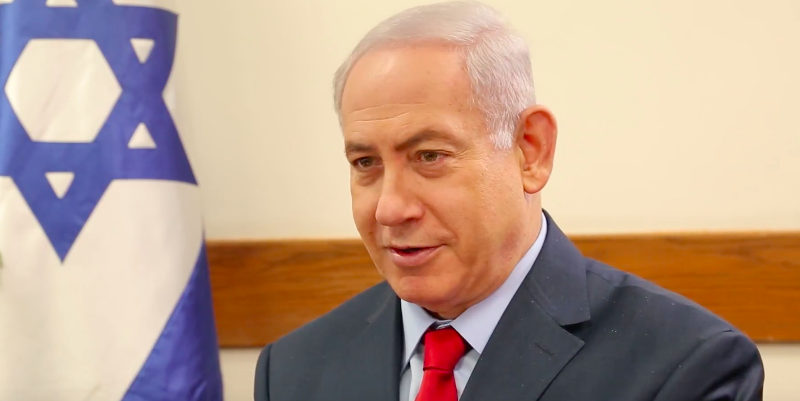 ​
NETANYAHU: ISIS OUT, IRAN IN? WE WON’T ALLOW IT:
​
Israel will not allow Iran and its proxies to take over areas vacated by the ISIS group, PM Binyamin Netanyahu made clear on Sunday 13 August 2017. "Today we received a review from the head of the Mossad about the security challenges we face. I will give summarize it in one sentence - ISIS out, Iran in. We are talking mainly about Syria," Netanyahu said. "Our policy is clear," said the Prime Minister. "We strongly oppose the military buildup of Iran and its proxies, first and foremost Hezbollah in Syria, and we will do everything necessary to maintain Israel's security. We are guarding the state and its borders. We are strengthening the IDF, strengthening the security forces all the time, in order to ensure security, because we know first and foremost that in order to build the land, we have to protect the land,” he stressed. Cohen told the cabinet in his briefing on Sunday that Iran has not abandoned its aspirations to become a nuclear power, and that the nuclear agreement signed between the world powers and Iran only strengthens Iranian aggression in the region. (Arutz-7) Iran is the main supporter of the Lebanon-based Hezbollah terrorist group and Palestinian terrorist factions. Iran (less than a 1000 miles away from Jerusalem), continues it lawless advancement towards obtaining nuclear arms with an eye towards annihilating the Jewish state.

ISRAELI MOSSAD CHIEF WARNS OF IRANIAN EXPANSION:
​
Iran is moving to fill the void left by the demise of ISIS throughout the Middle East; this, according to Israeli Mossad Chief Yossi Cohen, who warned that Tehran’s empowerment in Syria, Lebanon, Iraq and Yemen has become the central development in the region. Cohen likewise contended that the Islamic Republic has not given up on its goal to become a “nuclear threshold” state, and that the agreement with world powers aimed at curbing Tehran’s atomic program has served to “strengthen its aggressiveness.” Iran has long backed Syrian President Bashar al-Assad in the six-year-long war, having put boots on the ground in support of Shiite militias and Hizbullah terrorists. In Iraq, Tehran has likewise supported Shiite combatants in the battle against ISIS and has political sway over the government of Haider al-Abadi.

In Yemen, Tehran is arming the Houthi rebels in a campaign against a Saudi-led Sunni coalition. This comes against the backdrop of the recent defeat of ISIS in Mosul, and an offensive on its “headquarters” in Raqqa. A USA-led coalition has taken back more than two-thirds of ISIS territory in Iraq and over 50% in Syria, leaving competing groups to fill the vacuum. PM Netanyahu, who was an ardent opponent of the deal known as the Joint Comprehensive Plan of Action JCPOA, said that the recent developments are additional proof that the premises that underlined the deal were mistaken. One of those premises was that the deal would moderate Iran's behavior in the region. Netanyahu stressed that “Israel will continue to work with determination and in a variety of ways to protect itself from these threats” (Medialine)
​

President Donald Trump has recently signed wide-ranging Congressional sanctions against Iran. The law requires the president to extend a terrorism designation to Iran's Islamic Revolutionary Guard Corps (IRGC) and its foreign agents and affiliates by 30 Oct. 2017. The Revolutionary Guard has deeply penetrated key sectors of the Iranian economy. Guard-owned companies would be eligible for designation as supporters of terrorism. Revolutionary Guard commanders have threatened USA bases in the Middle East should the USA execute the terrorism designation. IRGC commander Maj.-Gen. Mohammad Ali warned that the USA "has to close down all its bases within 1,000 kilometers of Iran and that it will pay a high price for any miscalculation." (Jerusalem Center For Public Affairs)

Iran’s parliament has overwhelmingly voted to increase spending on its ballistic missile program and its paramilitary Revolutionary Guard in response to recent new USA sanctions. Lawmakers overwhelmingly approved the outlines of the bill to "counter America's terrorist and adventurist actions" as some chanted "Death to America". The vote comes amid growing tensions with the USA over the Iranian nuclear deal, which President Trump has said he would like to see cancelled. There were no details of how much spending would be increased. (Medialine)

IRANIAN OFFICIAL: NO ONE WILL INSPECT OUR MILITARY CENTERS:

A senior Iranian military official stated last week that Iran will not allow any foreign states, especially the USA to visit the country's military centers. "Both the great Iranian nation and the USA and the world should know that if there is only one demand in the whole world which will be rejected and if there is only one wish that will be taken to the grave, it is the Americans' demand to visit our military centers," said Commander of the Iranian Revolutionary Guards Corps, Brigadier General Hossein Salami. He underscored Iran's high defense and military power, and said Tehran has produced different missiles in such large numbers that it has problems in stockpiling them. The comments come amid tensions between Iran and the USA over the nuclear deal signed between Iran and world powers in 2015. (Arutz-7)

Israel’s Channel 2 aired a segment on 12 August 2017 highlighting the growing number of Venezuela's Jews fleeing the country amid rising instability and violence under President Nicolas Maduro. Interviewed in Jerusalem, Estella and Haim Sadna, a couple with four children from the Venezuelan capital Caracas, said food scarcity and rampant crime drove them to move to Israel. “We lived in a beautiful home with seven rooms. But we left everything behind. We left the house, the furniture, the cars,” the couple said. The Sadnas discussed the collapse of public services in the country such as healthcare, as well the uncontrollably high crime rates, with Venezuela having among the world’s highest murder rate. Venezuela once had one of the largest Jewish communities in the region, numbering some 25,000 in 1999. Today, only about 9,000 Jews are believed to remain in the country. Israel has been working in order to bring as many of those remaining as possible to Jewish state. (INN)

Palestinian President Mahmoud Abbas has clamped down on social media and news websites, the main outlets for debate and dissent in Judea & Samaria, with a new decree that allows his government to jail anyone on charges of harming "national unity" or the "social fabric." Rights activists say the edict is perhaps the most significant step yet by Abbas' government to restrict freedom of expression in the autonomous Palestinian enclaves of Judea & Samaria. The PA government has blocked 30 websites in the past month. Most of the sites were affiliated with Abbas' main rivals, Mohammed Dahlan and the Hamas terrorist organization ruling in the Gaza Strip. Five journalists working for news outlets linked to Hamas were detained days ago and charged with violating the new law, while four other journalists were called for questioning about social media posts critical of government policy. The new decree stipulates prison terms ranging from one year to life for using digital means to endanger the safety of the state or public order. (VOA)

A rare workshop for the production of chalkstone vessels, dated to the Roman period, is currently being excavated at Reina in Lower Galilee, Israel Antiquities Authority (IAA) reported. Excavations are unearthing a small cave in which archaeologists have found thousands of chalkstone cores and other types of production waste. "In ancient times, most tableware, cooking pots and storage jars were made of pottery. In the first century A.D. however, Jews throughout Judea and Galilee also used tableware and storage vessels made of soft, local chalkstone," said Excavations Director Dr. Yonatan Adler . "According to ancient Jewish ritual law, vessels made of pottery are easily made impure and must be broken," he explained. "Stone, on the other hand, was thought to be a material which can never become ritually impure, and as a result ancient Jews began to produce some of their tableware from stone.

​“Although chalkstone vessels are well-known at many Jewish sites throughout the country, it is extremely unusual to uncover a site where such vessels where actually produced. Today we are excavating a second site near Reina, located about a half mile from here. Our excavations are highlighting the pivotal role of ritual purity observance not only in Jerusalem but in far-off Galilee as well." Archaeologists uncovered the small cave during construction work for a municipal sports center by Reina’s local council not far from Kafar Kannah. Scholars believe Kafr Kanna may be the site of biblical Cana where Yeshua attended a wedding with his Mother and changed water to wine.Adler, said the discovery attests to the importance of ritual purity in the lives of Galilean Jews during Yeshua’s time. (INN/Kehila News)