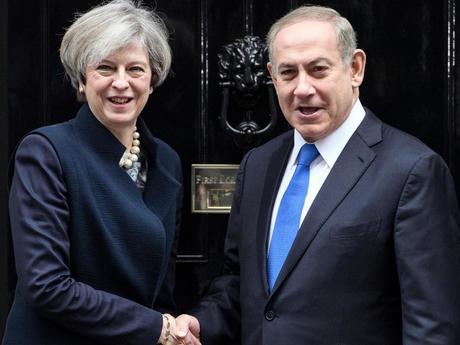 “’I will bring back the captives of My people Israel;
they shall build the waste cities and inhabit them;
they shall plant vineyards and drink wine from them;
they shall also make gardens and eat fruit from them.
I will plant them in their land, and no longer shall
they be pulled up from the land I have given them,’
says the Lord your God.” Am. 9: 14-15
BRITISH PRIME MINISTER REFUSES TO APOLOGIZE FOR BALFOUR DECLARATION:

British Prime Minister Theresa May on Thurs. 2 Nov. 2017 ruled out the idea that Britain would apologize for the 1917 Balfour Declaration, which proclaimed Britain’s support for the establishment of a Jewish national home in then-Palestine. Speaking at a celebratory dinner to mark the centenary of the Balfour Declaration in London, May said that that the British government was proud to support Israel. PM Binyamin Netanyahu and Rabbi Ephraim Mirvis, the Chief Rabbi of the United Hebrew Congregations of the Commonwealth, were in attendance. In her remarks, May noted that “Balfour wrote explicitly that ‘nothing shall be done which may prejudice the civil and religious rights of existing non-Jewish communities in Palestine, or the rights and political status enjoyed by Jews in any other country.' So when some people [Palestinian groups] suggest we should apologize for this letter, I say absolutely not,” she continued. “ We are proud to stand here today together with Prime Minister Netanyahu and declare our support for Israel. And we are proud of the relationship we have built with Israel." May also stressed that Britain remains “absolutely committed to Israel’s security” and “will always support Israel’s right to defend itself.” (INN)

Former Hamas leader Khaled Mashaal on 2 Nov. 2017 vowed that the Palestinian Arabs will forcefully cancel the 1917 Balfour Declaration, which proclaimed Britain’s support for the establishment of a Jewish national home in then-Palestine. Mashaal attacked Britain for boasting of the "crime" of the Balfour Declaration instead of apologizing for this "mistake" and correcting it. “We do not expect them to correct history,” he said, adding, "We will take the initiative into our own hands and correct history and the Palestinian people and the fighters will trample the Balfour Declaration with their feet.” In a defiant tone, Mashaal then said that the Palestinians did not need an apology from Britain and that this "crime" would forever be a mark of Cain on its forehead.” Palestinian Arab organizations have for months been waging a campaign aimed at forcing Britain to apologize for the document. On 1 Nov. 2017, the Palestinian Authority government in Ramallah demanded not just a British apology for the document, but also compensation. British PM Theresa May outright rejected the calls for Britain to apologize. (Arutz-7)

DANON TO PA: LEARN SOME HISTORY:

The UN Committee on the Exercise of the Inalienable Rights of the Palestinian People on 2 Nov. 2017 marked the 100th anniversary of the Balfour Declaration with an event focusing on its “impact on the Palestinian people.” Speaking at the event, Professor Rashid Khalidi, a former adviser to the Palestine Liberation Organization (PLO) said, “For Palestinians, this declaration was a gun pointed at their heads” and that “the Balfour declaration constituted a declaration of war by the British Empire on the indigenous population of the land it was promising to the Jewish people as a national homeland. It launched a century-long assault at the Palestinian people.” Israel’s Ambassador to the UN Danny Danon rejected Khalidi's comments and said in response, “These statements are another example of hateful Palestinian incitement and their refusal to recognize the legitimacy of the Jewish state. While the Jewish people realized the dream of Zionism, our opponents continue to focus on hate and violence. The true lesson of history is that the Palestinians' refusal to recognize the right of the Jewish people to our homeland has not benefited them, and will never undermine the thriving vitality of the State of Israel. We’ll continue to proudly celebrate this historic milestone that led to Israel’s founding,” he added. (INN)

“IF YOU THREATEN US, YOU WILL DISAPPEAR”:
Israel’s Intelligence Minister Yisrael Katz spoke on 2 Nov. 2017 at the Zionist Congress that convened in Jerusalem on the 100th anniversary of the signing of the Balfour Declaration. Minister Katz spoke about the historic right of the Jewish people in its historic homeland, criticized the Palestinian Authority and its supporters who are attempting to erase Jewish history, and conveyed a threatening message to Iran. He said that the Balfour Declaration "was only fulfilled thirty-one years later, but the basis for establishing a state for the Jewish people in the Land of Israel was set on that historic day. Even though we lost about a third of our people in the Holocaust, Zionism did not surrender, and no one could deny us our natural and historic rights in the Land of Israel. These days, when quite a few organizations and regimes are trying to undermine the eternal Jewish connection to the Land of Israel, it is more important than ever to be proud of who we are, the way we have lived, and the justice of our path.

"The Palestinians and others who are trying to rewrite history with the constant desire to negate the connection and sever the bonds between the people of Israel and the Land of Israel and between the State of Israel and Jerusalem, our eternal capital, will not succeed. Jerusalem is the eternal capital of the people of Israel since King David established his residence, and it served as the capital of all the kings of the house of Judah.” Addressing the Iranian threat, Katz said: "In every generation there are those who seek to destroy the Jewish state and fail. In this generation that role has been taken by the Iranians. We will never allow Iran to have nuclear weapons. And we must cut off the axis of Shi'ite terror created by the war in Syria. I warn Khamenei, Rouhani, and Suleimani: If you continue to undermine and threaten the State of Israel, you will disappear before long. We have many capabilities, and those who threaten us will pay the full price!”(Arutz-7)

NETANYAHU TELLS MAY: THOSE WHO WANT TO KEEP THE IRAN DEAL SHOULD COOPERATE IN CORRECTING IT.

​Israeli PM Netanyahu told British PM Theresa May in London on 2 Nov. 2017: "A hundred years after Balfour, the Palestinians should finally accept the Jewish national home and finally accept the Jewish state. And when they do, the road to peace will be infinitely closer. There are great things happening in the Middle East, because many Arab countries now see Israel not as an enemy, but as their indispensable ally in the battle against militant Islam. The threat we all see is a resurgent Iran that is bent not only on dominating the region, but bent on developing nuclear weapons. The goal that I have in mind is not keeping or eliminating the deal; it's improving the deal and correcting its main flaws. And I think those who want to keep the deal should cooperate in correcting the deal." (Prime Minister's Office)

A new report by Asma Jahangir, the UN special rapporteur for human rights in Iran, cites at least 247 executions in the first six months of 2017. It also notes the use of flogging, binding, amputation, and stoning as punishments; a "high number" of arrests of journalists, political activists, and human rights defenders; and wide-ranging discrimination against women and ethnic and religious minorities. (Foundation for Defense of Democracies)

Hundreds of far-left South African demonstrators on 2 Nov. 2017 protested in front of the Israeli embassy in South Africa, demanding the South African government to shut down the embassy and expel the Israeli delegation. The demonstration, held in the northern city of Pretoria, was organized by the Economic Freedom Fighters (EFF) party, the third largest political party in South Africa. EFF chief Julius Malema led the protest, and called upon participants to “occupy” Israel’s embassy on the 100th anniversary of the Balfour Declaration, which led to the League of Nations Mandate to establish a Jewish national home in the historic land of Israel. Malema tweeted. “We are not free until Palestine is free, let’s occupy the Israel embassy.” Malema called for the abolition of Israel as a Jewish state, and its replacement with an Arab-majority state of Palestine. A statement by the EFF denounced Israel as an “apartheid” regime and called for a boycott of Israel.” (Arutz-7)

ANTI-DEFAMATION LEAGUE ‘ASTONISHED AND HORRIFIED’ BY TWO-THIRDS INCREASE IN ANTI-SEMITIC INCIDENTS IN 2017:

​The head of the Anti-Defamation League declared his organization was “astonished and horrified” by a recent steep rise in anti-Semitic incidents in the USA, as the ADL released new data last week that compared 2017 with the previous year. ADL’s Audit of Anti-Semitic Incidents - which covers the period from January through September of this year - recorded almost 1,300 anti-Semitic outrages across the country, including physical assaults, vandalism and attacks on Jewish institutions. According to the ADL, that total “represents a 67% increase over the same period in 2016 and already exceeds the 1,266 incidents reported in all of last year.” The organization emphasized what it said was a disturbingly high number of anti-Semitic bullying and vandalism incidents in K-12 schools and college campuses across the USA. “We are astonished and horrified by the rise in anti-Semitic harassment, incidents and violence targeting our communities,” said Jonathan A. Greenblatt, ADL CEO and national director. (Koenig)