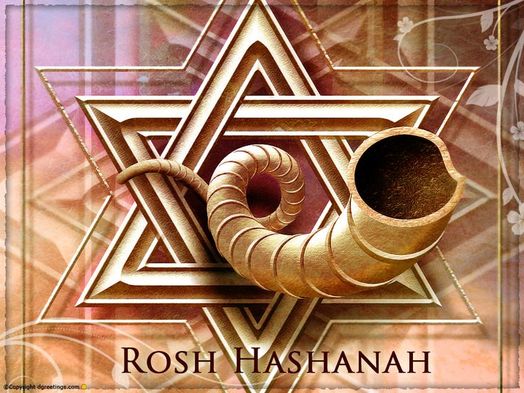 Rosh Hashana - the Jewish New Year also known as the Feast of Trumpets begins in the evening of Wed. 20 Sept. The first of the Biblical autumn festivals, Rosh Hashana celebrates the birth of the world and humanity. Symbolic foods such as apples and honey are central to the holiday, symbolizing the sweetness, health, success and good deeds which we hope the coming year will bring. In the midst of the troubled Middle East, we will pause in Israel to thank God for His sovereign goodness to us and to others throughout the exiting year. May His blessing be showered upon all of you who love Israel.

REPORT: ISRAELI POPULATION CONTINUES TO INCREASE IN ALL SECTORS: 88% OF ISRAELIS WERE SATISFIED WITH THEIR LIVES IN THE PAST YEAR:

The Central Bureau of Statistics released its annual report on Mon.18 Sept. 2017 ahead of Rosh Hashana. The report looked at population trends in Israel over the course of the year and includes information on education, social welfare, public attitude and employment trends. According to the data, Israel’s population is on a consistent incline. Israel’s population grew by 156,000 or 1.8% since last year’s report. In terms of public attitude, 88% of Israeli citizens aged 20-years-and-older said they were "very satisfied" or "satisfied" with their lives. 21% or some 1.1 million people feel stressed on a constant basis. 6% of the population of 340,000 admits to feeling lonely on a regular basis and 34% say they find it difficult to cover their monthly expenses. Today, Israel’s population is estimated at approximately 8.743 million. The Jewish population makes up approximately 6.523 million or 74.6% of the total population. The Arab population is about 1.824 million, 20.9% of the population and the rest make up about 396,000 or 4.5%. Each of these sectors experienced consistent growth since the previous report. (J.Post)

USA PRESIDENT DONALD TRUMP WISHED AMERICAN JEWS A HAPPY ROSH HASHANA:
​
USA President Donald Trump released a videotaped message to Jewish families on Mon.18 Sept. 2017, wishing them "many blessings" and a happy new year as they enter the holiday season. "The High Holy Days are a time of both reflection on the past year and hope for renewal in the year to come," Trump said. "Jewish communities across the country, and around the world, enter into a time of prayer, repentance, and rededication to the sacred values and traditions that guide the incredible character, and spirit, of the Jewish people. We reaffirm the unbreakable bond between the United States and Israel, and we ask God to deliver justice, dignity, and peace on Earth," he added. "Melania and I wish everyone a sweet, healthy, and peaceful year, which we hope will bring many blessings to all." (J.Post)

TRUMP SLAMS THE UN IN HIS FIRST UN APPEARANCE:

President Trump used his inaugural address at the United Nations on Mon.18 Sept. 2017 to criticize the world body for not living up to its potential because of bureaucracy. “Despite a ballooning budget and a doubling of staff since 2000, Trump said, “We are not seeing the results in line with this investment” and encouraged UN Secretary-General Antonio Guterres to focus more on people than bureaucracy.” We encourage all member states to look at ways to take bold stands at the United Nations with an eye toward changing business as usual and not being beholden to way of the past, which were not working,” he said, pledging the USA would be full partners in the reform efforts. Trump also said none of the 193-member nations should shoulder a “disproportionate share of the burden – militarily or financially.” And he called on creating “clearly defined goals and metrics for evaluating the success” of the UN’s peacekeeping mission around the globe. With the changes, Trump said, “I am confident that if we work together and champion truly bold reforms, the United Nations will emerge as a stronger, more effective, and greater force for peace and harmony in the world.” In his address, Guterres said what keeps him up at night is the “bureaucracy, fragmented structures, Byzantine procedures and endless red tape” of the UN. I even sometimes ask myself whether there was a conspiracy to make our rules exactly what they need for us not to be effective,” he said. (N.Y. Post)

NETANYAHU SATISFIED WITH MEETING WITH TRUMP:

Netanyahu, met with USA President Donald Trump for the third time this year at the Plaza Hotel in Manhattan on Mon.18 Sept. 2017. The Israeli premier expressed his desire for a tougher stance vis-a-vis Iran in a bid to frustrate its ambitions to produce a nuclear weapon. Netanyahu later expressed satisfaction with his meeting with the USA President: “Under your leadership, the alliance between the United States and Israel has never been stronger,” Netanyahu tweeted. He also thanked Trump for standing alongside Israel in the UN. “Under President Trump, the USA position toward Israel in the UN has been unequivocal; it's been strong; it's got both clarity and conviction. I want to thank you on behalf of the people of Israel and Israel's many friends around the world.” At the start of his meeting with Trump, Netanyahu said, “I look forward to discussing with you how we can address together what you rightly called is the terrible nuclear deal with Iran and how to roll back Iran's growing aggression in the region, especially in Syria. As you said, we will discuss the way we can seize the opportunity for peace between Israel and the Palestinians and between Israel and the Arab world, I think these things go together and we look forward to talking about how we can advance both,” he added. Netanyahu has recently expressed grave concern at Tehran’s attempts to spread its influence throughout the Middle East, and particularly to Syria and along Israel's northern border. (INN/Ynet)

King Hamad bin Isa al Khalifa of Bahrain condemned the Arab boycott of Israel in Los Angeles, California last week. King Hamad made the remarks during an event denouncing religious hatred and violence at the Simon Wiesenthal Center in LA. Bahrain, a kingdom of some 1.5 million people in the Persian Gulf, currently does not have diplomatic relations with Israel. King Hamad also told Simon Wiesenthal Center director Rabbi Abraham Cooper that Bahraini citizens are free to visit Israel as they please. Rabbi Cooper said that he was encouraged by King Hamad's softening stance on Israel. "If I had to predict, I would tell you that the Arab world’s relationship with the state of Israel is going to dramatically change,” he said, adding that the Bahraini king is “ahead of the pack and smart.” (INN)

NEW QUESTIONS OF ‘WHO IS A JEW” IN ISRAEL:

USA AVIATOR WHO HELPED FORM ISRAELI AIR FORCE DIES AT 94:
​
Mitchell Flint, an American aviator who helped form the Israeli Air Force in 1948 and served in Israel's first fighter squadron has died. He was 94. Flint, a former USA Navy fighter pilot, died 16 Sept. 2017 in Los Angeles of natural causes, said his son, Michael Flint. Flint was one of the founding members of "Machal," a group of non-Israelis who fought in the 1948 Arab-Israeli War. He was one of the original members of the Israeli Air Force's first fighter squadron and helped train Israel's first military pilots, his son said. Flint and other members of the Machal had flown in German planes that were captured during World War II and covered the Nazi insignia with Stars of David. When he returned to the United States, Flint moved to Los Angeles and became a lawyer. He continued flying until last year, his son said. "He was a humble man who did what he did and never looked for glory," Michael Flint said of his father. (Times of Israel)