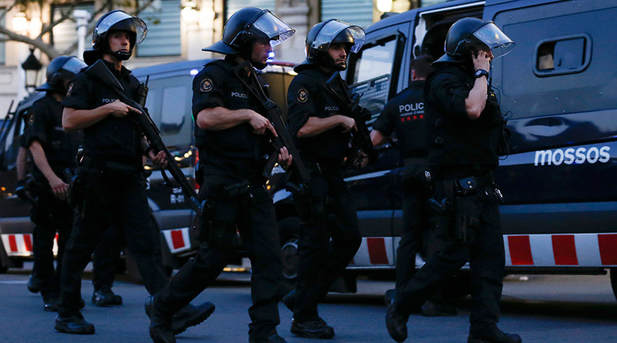 HOW THE TERRORIST ATTACKS UNFOLDED IN AN AROUND BARCELONA:

Authorities say terrorists who attacked two cities in Spain on Thurs. 17 August 2017, were apparently planning a larger, more sophisticated assault. At least 14 people, including one American, were killed, and more than 130 injured. Investigators are trying to determine whether the driver of a van that ran down pedestrians on the crowded sidewalks of Barcelona was among a group of terrorists killed hours later, in a separate attack. ISIS has claimed responsibility. More arrests were made Friday. In all, four suspects have been detained following the twin vehicle attacks, one down a busy Barcelona street, the second, 75 miles south in the beach town of Cambrils. Media sources say the terrorists were planning a larger attack -- possibly a vehicle bomb using gas canisters being constructed in a house just down the street. The house exploded the previous day. It was leveled, and the explosions were so strong a neighbor showed how it broke the glass in her window. Spanish police theorize that after the explosives prematurely ignited, and the terrorists went to plan B. On Thursday, a van was driven down the tourist-packed Las Ramblas in Barcelona -- swerving to hit as many people as possible. Eight hours later, terrorists in another car in Cambrils rammed into more pedestrians. One woman died in the attack. From Cambrils, the five attackers in the car were quickly shot dead by police. The search for at least four other terrorists continues. (CBS)

‘OUR HEARTS ARE WITH SPAIN’:

The free world is under attack by Islamic terror, Israeli Defense Minister Avigdor Liberman said Friday 18 August 2017. Speaking just hours after a pair of attacks in Spain left 14 dead and more than 130 injured, Liberman said, "The terror attacks in Barcelona and Cambrils are yet another frightening attempt by radical Islam to harm the nations of the free world and to disrupt life in them. This terror must be defeated by the nations of the West, including Israel, working together closely with continued cooperation in security and intelligence operations. We must all fight with determination against not only those who commit terror attacks, but also those who send them, those who fund them, and those who inspire them. I send my condolences to the families of the murdered, and wish those injured a quick recovery from their injuries. Our hearts are with Spain and its citizens during this difficult time." Late Thursday night, other Israeli leaders responded to the attacks, offering their condolences and condemning the terrorists responsible. “Israel strongly condemns the terrorist attack in Barcelona,” said PM Binyamin Netanyahu. “On behalf of the citizens of Israel, I send condolences to the families of those who were killed and wishes for a quick recovery to the injured. This evening we again saw that terror strikes everywhere; the civilized world must fight it together in order to defeat it," he said. (Arutz-7)

FOLLOWING TERROR ATTACK, BARCELONA’S CHIEF RABBI SAYS COMMUNITY IS DOOMED:
​
Commenting on deadly attacks in Catalonia, the chief rabbi of that region in Spain said his community is doomed, partly because of radical Islam and the alleged reluctance of authorities to confront it. Rabbi Meir Bar-Hen has been encouraging his congregants to leave Spain, which he called a “hub of Islamist terror for all of Europe,” for years before the terrorist attacks he said. “I tell my congregants: Don’t think we’re here for good. And I encourage them to buy property in Israel. This place is lost. Don’t repeat the mistake of Algerian Jews, of Venezuelan Jews. Better get out early than late.” Part of the problem exposed by the attacks, Bar-Hen said, is the presence of a large Muslim community with “radical fringes.” Once these people are “living among you,” he said of terrorists and their supporters, “it’s very difficult to get rid of them. They only get stronger.” He also said this applied to Europe as a whole. “Europe is lost,” he said. Bar-Hen emphasized that he was speaking as a private person and not for all the members of his community. (J.Post)

Two people were killed after a man armed with a knife stabbed several people in Finland before being shot by armed police. At least one person was seen lying dead on the pavement in the southwestern city of Turku. Eight people had been taken to hospital following the stabbings, including a woman who was pushing a pram. Some of the victims are in a critical condition. Police shot a man in the leg before arresting him and are now on the hunt for more suspects. Chief of police Seppo Kolehmainen said: "We cannot exclude the events being linked to international terrorism." Speaking to USA media sources, Kent Svensson, 44, said: “This guy had this huge knife in his hand - and several times he was stabbing this person. People were just running everywhere. The guy was just constantly stabbing. He was just turning around, flinging his knife everywhere. There were people lying everywhere. People were screaming and running. We were just talking about what happened in Barcelona. We thought we were safe in Finland. And then this happens.” (UK Dailymail)

Hamas held a closing ceremony in Gaza on Friday 18 August 2017, for 120,000 boys and girls attending the terrorist group’s summer schools. The ceremony, for some 1,000 students who took part in the camps was framed as part of the group's plan to continue its armed conflict with Israel. Boys between 15 and 18 years of age were put through military drills, including shooting with live ammunition and training in scouting skills. Hamas official Ashraf Abu Zayed said the training came within the framework of "preparing for the liberation of Palestine. We are trying to invest the younger generation and guide them towards the liberation project," he told media sources, referring to armed struggle against Israel. Hamas’ so-called “military wing”, the Izz Al-Din Al-Qassam Brigades, regularly trains children at its camps on military skills, such as use of weapons, and also simulates the kidnapping of Israeli soldiers. Hamas has previously launched a program to teach “resistance” to Israel in Gaza’s public school system. (Arutz-7)

USA TO DEPORT PALESTINIAN TERRORIST RASMEA ODEH TO JORDAN:
​
A Palestinian woman who perpetrated a 1969 supermarket bombing and later immigrated to the United States had her citizenship revoked on 17 August 2017 and was sentenced to deportation to Jordan by a USA federal court in Detroit. Rasmea Odeh was convicted of immigration fraud as part of a plea deal by the same court in April 2017 with Thursday’s deportation sentence being a last formal step before she is sent on her way. The terrorist attack killed two Hebrew University students. Odeh was sentenced to a life term. “Hopefully, this will be the final chapter in the tragic story of this still-dangerous and unrepentant PFLP terrorist who tried to fraud the USA immigration services,” Shurat Hadin director Nitsana Darshan-Leitner who assisted the USA Department of Justice with compiling evidence, said in advance of the hearing. “We applaud the work of the American Department of Justice and in particular Assistant USA Attorney Jonathan Tukel, who really pursued Odeh with vigilance, exposed her lies and assured that her Jewish victims received a measure of justice and closure,” she said. (J.Post)