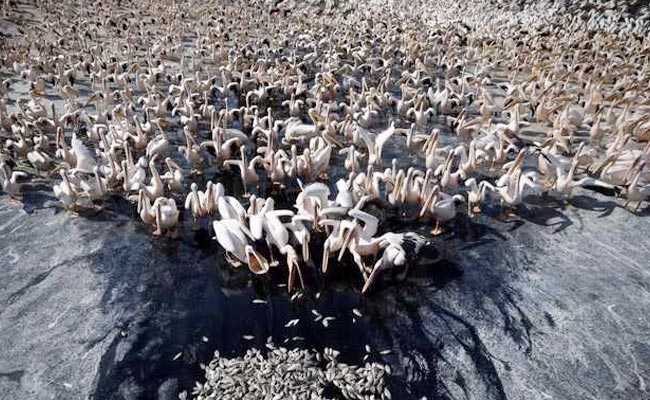 THOUSANDS OF MIGRATING PELICANS GET FREE LUNCH IN ISRAEL:

A visit from tens of thousands of migrating pelicans may be a gift for bird-watchers, but for Israeli fish farmers it can be costly. In response, Israeli authorities have taken to feeding the birds to help preserve the farms’ stocks. Members of staff at the reservoir in Mishmar Hasharon feed the pelicans with six tons of fish three to four times a week, during the three months that the pelicans are flying over Israel, in a project funded by the Israeli Agriculture Ministry. Estimates of the number of birds that pass over Israel each year range from 75,000 to over 100,000. They migrate from southern Europe to spend the winters in central Africa. “They eat here and in the north, and then they have enough food to continue to the south of Sudan.” (Reuters)

Stephen M. Greenberg, Chairman and Malcolm Hoenlein, Executive Vice Chairman of the Conference of Presidents of Major American Jewish Organizations, on Friday 27 Oct. 2017, praised the USA House of Representatives for approving new sanctions on Hezbollah and Iran. Last week the House approved new sanctions on the Hezbollah terrorist group, which is one of Iran's terrorist proxies in the Middle East. Sanctions against Iran for its ballistic missile development and support for Hezbollah were approved a day later. “We welcome the overwhelming bipartisan majorities in the USA House of Representatives supporting adoption of a package of legislation expanding and strengthening sanctions against Iran for its ongoing development of ballistic missile capabilities and against Iran’s terrorist proxy Hezbollah for its increasingly threatening and deadly activities on Israel’s northern border,” said Greenberg and Hoenlein.

“The legislation also creates a path for America’s allies and partners to join the effort to curtail Iran’s quest to dominate the region through the use of sophisticated conventional weapons systems and continued financial, technical and material support for Hezbollah and other terrorist groups,” they said. “The Iran Ballistic Missiles and International Sanctions Enforcement Act is an important step toward ending Iran’s ability to fund the development of ballistic missiles designed to carry nuclear armed war heads. The two bills addressing the terrorist activities of Hezbollah and the resolution urging the EU to implement sanctions against terrorists affiliated with Hezbollah and to designate Hezbollah in its entirety as a terrorist organization, were adopted by voice vote. The new sanctions, they pointed out, “will equip the Trump administration with more effective measures to thwart Iran’s hegemonic ambitions in the Middle East and new tools to garner support from USA allies and partners in the effort to restore stability to the region.” (Arutz-7)

Governor Scott Walker issued an executive order on Friday 27 Oct. 2017 barring state agencies from engaging in business with entities that discriminate against the Jewish state. The Wisconsin governor's executive order came ahead of his departure for Israel on that same day with a 15-member trade group, running until 2 November 2017. “We stand firmly against discrimination in any form and we wholly support our friends in Israel,” said Walker, adding “I look forward to leading a trade delegation to Israel to foster new trade partnerships between Wisconsin and Israeli businesses.” Wisconsin becomes the 24th USA state to pass either an executive order or state law outlawing BDS activity targeting Israel. According to Walker's statement, Israel-Wisconsin trade relations are flourishing, with "Wisconsin exporting over $80 million annually to Israel and importing over $200 million annually from Israel." (J.Post)

UK Labour Party leader Jeremy Corbyn has declined to attend a dinner in London this week with PM Benjamin Netanyahu celebrating the 100th anniversary of the Balfour Declaration, which pledged Britain’s support for a Jewish national home. Although no reason was given for Corbyn’s decision to skip the event, the Labour chief has long been a staunch Israel critic and has been dogged by accusations of tolerating anti-Semitism in his party’s ranks. While declining to comment on Corbyn’s decision specifically, Israel’s ambassador to the UK Mark Regev said “Those who oppose the Balfour Declaration are exposing themselves for the extremists they are.” He also said a “vocal minority” of students and professors in the UK continue to oppose Israel’s existence 70 years after the country was founded, while adding that “Britain was on the right side of history” in its support for a Jewish state. (Times of Israel)

A Jewish schoolgirl from the north London neighborhood of Stamford Hill neighborhood went to receive her package from a store providing internet mail services but was shocked by the racist slur she received from the salesperson. The girl reported that the salesperson stopped providing service for her while dealing with her order and started to address another customer. When she asked to receive her package, she was told: "Be patient, Jews come last." The girl, who was extremely insulted, informed the Hashomrim organization who reported the matter to local police. Police referred the incident to organizations working in England against anti-Semitism. (Arutz-7)

The United Arab Emirates’ top judo official apologized to his Israeli counterpart last weekend after a tournament in Abu Dhabi saw Israeli athletes repeatedly snubbed by their hosts because of their nationality. Mohammad Bin Thaloub Al-Darei, president of the UAE’s Judo Federation, and Aref Al-Awani, another senior Emirates sports official, apologized to Israeli Judo Association head Moshe Ponte over the fact that an athlete from the UAE refused to shake hands with an Israeli judoka after a match during the several-day tournament. They also congratulated the Israel team for their success in the tournaments. IJF president Marius Vizer called the move a “gesture of courage.” On Friday 27 Oct. 2017 the UAE’s Rashad Almashjari refused to shake hands after losing to Israeli Tohar Butbul in the first round of the men’s lightweight (66-73 kg) category. Butbul went on to win bronze, one of several medals won by Israelis at the Abu Dhabi Grand Slam judo tournament. The group reportedly agreed that Israeli symbols would be permitted at the event next year, but there was no confirmation. Vizer only expressed hopes that “in the near future we can achieve the best condition of participation for the Israel teams.” (Koenig)
SAUDI PROMISE OF ‘MODERATE ISLAM’ SHIFTS POWER: The man who may soon be king of Saudi Arabia is charting a new, more modern course for a country so conservative that for decades there were no concerts or film screenings and women who attempted to drive were arrested. Since coming to power with the support of his father, the king, Crown Prince Mohammed bin Salman has pushed forth changes that could usher in a new era for one of the United States’ most important allies and swing the kingdom away from decades of ultraconservative dogma and restrictions. He’s introduced musical concerts and movies again and is seen as the force behind the king’s decision to grant women the right to drive as of next year. Prince Mohammed’s agenda is upending the ruling Al Saud’s longstanding alliance with the kingdom’s clerical establishment in favor of synchronizing with a more cosmopolitan, global capitalism that appeals to international investors and maybe even non-Muslim tourists. The prince grabbed headlines in recent days by vowing a return to “moderate Islam.” He also suggested that his father’s generation had steered the country down a problematic path and that it was time to “get rid of it.” (Times of Israel)

IDF SEALS OFF 10 TUNNELS UNDER JUDEA & SAMARIA SECURITY FENCE:
​
The IDF sealed off 10 tunnels under the security barrier in Judea & Samaria near the city of Hebron, after dozens of Palestinians reportedly managed to illegally cross into Israeli territory through the passages over the past few weeks. Each of the tunnels, which were built to serve as drain pipes, was about 1.5 meters (five feet) in diameter and about 20 meters (65 feet) in length, allowing for people to easily cross through them, Israel Radio reported on Friday, 27 Oct. 2017. Last week, at least 100 Palestinians who crossed into Israeli territory via the massive drainage pipes carried out a series of agricultural thefts near Moshav Shekaf, in the Lachish region, stealing dozens of tons of produce according to the radio report. (Times of Israel)