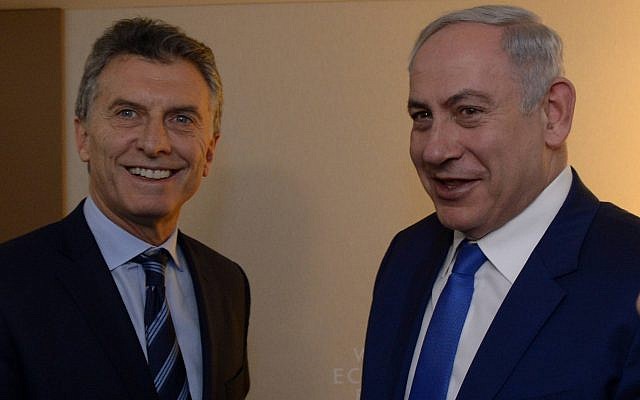 Israeli PM Netanyahu has been declared an honored visitor by the Buenos Aires city legislature. The honor will be bestowed on him on 12 Sept. 2017 while he is in Buenos Aires, at the empty town square that marks the place where the Israeli embassy was located until it was destroyed in a car bomb attack in March 1992, which killed 29 people. Netanyahu also will visit Jewish institutions and will honor the victims of the 18 July 1994 terrorist attack against the AMIA Jewish center that killed 85. Both attacks remain unsolved. Netanyahu’s visit to Argentina will be the first by a sitting Israeli prime minister since the creation of the State of Israel in 1948. “This is a gesture of the utmost importance,” read the resolution passed last week by the city legislature. Netanyahu is scheduled to arrive in Argentina’s capital on 11 September with a group of 30 Israeli businessman to meet national government authorities, local Jewry and businessman. He will spend his visit in the capital city Buenos Aires, home of 165,000 Jewish inhabitants. Following his visit to Argentina through 13 Sept. 2017 Netanyahu will travel north to Colombia and then to Mexico. Netanyahu then will arrive in New York to speak at the UN General Assembly on 19 September. (Arutz-7)

There is much unsolved skulduggery surrounding the Buenos Aires attacks that targeted the Jewish community in 1992 and 1994. For the first time in 2016, an Argentinean judicial official confirmed that the former special prosecutor investigating into the 1994 AMIA bombing, Alberto Nisman, had not committed suicide but had been murdered. Ricardo Sáenz, the prosecutor before the Buenos Aires Criminal Appeals Court, said Nisman was the victim of a “homicide.” In a ruling presented before the Appeals Court, mother and sister said that the case could no longer be handed by Judge Fabiana Palmaghini, but must go before a federal magistrate. Nisman, the lead investigator into the horrific 1994 bombing of the Buenos Aires Jewish center, and a Jew himself, was found dead in a pool of blood in his bathroom on 18 January 2015, a 22-caliber revolver at his side. He had been due to appear before a congressional hearing the next day to deliver a scathing report that accused then-president Cristina Kirchner of shielding high-ranking Iranian officials from prosecution over the bombing. (INN)
May long overdue compelling evidence come to light that will bring to justice all those responsible for these brutal attacks and murders - suspected to have been backed by Iran and compliant, willing Buenos Aires.

President Reuven Rivlin left for Munich on Tues. evening, 5 Sept. 2017, for the inauguration of the long overdue monument in memory of 11 Israeli athletes who were brutally murdered and cruelly dismembered during the 1972 Munich Olympics by terrorist organization Black September. Rivlin’s departure coincided with the 45th anniversary of the 5 Sept. attack on the Israeli section of the Olympic Village. Rivlin who will unveil the monument together with German President Frank-Walter Steinmeier said he was honored to join the German president in paying tribute to the proud Israeli sportsmen who were murdered in cold blood. He sees the monument, which is located at the Olympic Park and is a meeting center carved like an open wound into the hillside, as a warning symbol of the danger of hatred and the brutality of terrorists. He also regards it as a declaration that perpetrators and supporters of terrorism will pay for their crime. After the ceremony, Rivlin and his wife will meet with the families of the victims. Rivlin will then fly to Berlin for a meeting with Chancellor Merkel. (J.Post)

For the second consecutive year, the Police Unity Tour, a delegation of 52 American law-enforcement officers from 12 states, arrived in Israel to train in counterterrorism techniques and attend an annual 9/11 memorial service outside Jerusalem. According to the delegation’s leader, Michael Safris, chief of the Essex County’s Sheriff’s Office, the Police Unity Tour was established in 1997 to honor officers killed in the line of duty. “We are here to honor fallen police officers from the USA and Israel,” he said on 4 Sept. 2017. During their stay, the USA delegation will be based at the Beit Shemesh police academy, where they will participate in multiple counterterrorism training exercises, meet with elite units, and be briefed by Police Commissioner Roni Alsheich. The delegation will conclude following a 11 Sept. 2017 memorial service held at the 9/11 Living Memorial Plaza in the Arazim Valley. (J.Post)

Diaspora Affairs Minister Naftali Bennett has pledged $1 million in relief aid for the Jewish community of Houston, saying, “The Jewish state is measured by its response when our brothers around the world are in crisis.” This aid will be used to help repair and restore the communal infrastructure – schools, synagogues and JCC – which are not funded or supported by the state. “The city of Houston has been hurt badly, and the Jewish community – 70% of which lived in the flooded neighborhoods – was hit hard,” said Bennett. “The old-age home and JCC were damaged, and hundreds of families will remain homeless. From talks we’ve had with the heads of the community and Israel’s Consul General, we learned the damage is vast, and the rehabilitation will take years. For years the Jewish communities stood by Israel when it needed their help; now it is our turn to stand by Houston’s Jewish community.” (J.Post)

USA Ambassador to the UN Nikki Haley said that North Korea is "begging for war" at an emergency session of the UN Security Council to discuss the rogue nation's recent hydrogen bomb test. Ambassador Haley listed off the actions the UN has taken to contain North Korea's reckless and destabilizing behavior, before declaring, enough is enough. "Twenty-four years of half measures and failed talks is enough.” She said that the "incremental approach" which the international community has taken towards North Korea and its nuclear ambitions had failed despite the best of intentions. “We have kicked the can down the road long enough. There is no more road left," she said. "The time has come to exhaust all diplomatic means to end this crisis. Only the strongest sanctions will enable us to solve this problem through diplomacy." Sunday's detonation was the sixth nuclear weapons test North Korea has carried out since 2006. North Korea claimed on 2 Sept. 2017, it has developed a hydrogen bomb (H-bomb) which can be loaded into the country's new intercontinental ballistic missile. USA President Donald Trump suggested a military attack on North Korea was on the table following the announcement of the thermonuclear test. (Arutz-7)

The USA Department of Defense is testing an Israeli drug designed to help the body recover after exposure to radiation in the case of nuclear fallout. The USA is testing the medicine to see if it can be administered before service members are exposed to radiation. The test of what North Korea claimed to be a hydrogen bomb has increased the urgency of perfecting such a drug. The Israeli company Pluristem has partnered with the medical university at Fukushima, Japan, site of a 2011 nuclear meltdown, in developing the drug. (CNN)

INDIA TO BID FOR ISRAEL OIL-AND-GAS EXPLORATION BLOCKS:
​
Indian state-run Oil and Natural Gas Corp plans to bid for Israeli offshore oil-and-gas exploration blocks, India’s oil minister told Reuters. This is the first major deal between the two countries since a groundbreaking trip by PM Narendra Modi in July 2017. India and Israel have deep defense ties but Modi and his right wing ruling group are pushing to expand the relationship into other sectors such as energy and technology with a country they see as a natural ally against terrorism. A high-ranking delegation from India, the world’s third-biggest oil consumer, visited Israel last month to discuss taking part in the tender for blocks in the Mediterranean Sea and Israeli officials said they were pleased with the visit. “We will definitely bid for Israel’s oil-and-gas blocks,” said Indian Oil Minister Dharmendra Pradhan. (Reuters)