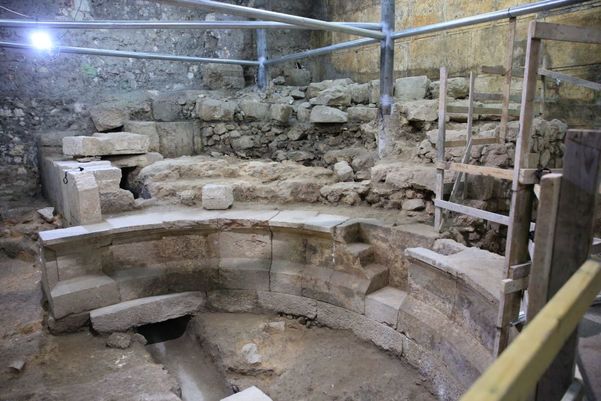 A rare 200-seat theater from the Roman period and eight large ancient stone courses recently unearthed under Wilson’s Arch near the Western Wall by the Israel Antiquities Authority were presented at a press conference in the Old City this week. The site’s excavators on behalf of the Authority, Dr. Joe Uziel, Tehillah Lieberman and Dr. Avi Solomon, said the dig was initiated to date Wilson’s Arch, but turned into far more when the theater was discovered. “We did not imagine that a window would open for us onto the mystery of Jerusalem’s lost theater. This is a relatively small structure compared to known Roman theaters such as at Caesarea, Bet She’an and Bet Guvrin,” said Lieberman. “This fact, in addition to its location under a roofed space, in this case under Wilson’s Arch, leads us to suggest that this is a theater-like structure of the type known in the Roman world as an odeon. In most cases,” he continued, “such structures were used for acoustic performances. Alternatively, this may have been a structure known as a bouleuterion, the building where the city council met.

Interestingly, the archaeologists believe the theater was never used. “A number of findings at the site indicate this, among them a staircase that was never completely hewn,” said Solomon. “It is clear that great effort was invested in the building’s construction, but, oddly, it was abandoned before it was put to use. The reasons for this are unknown,” he added. “But they may have been connected to a significant historical event – perhaps the Bar Kokhba Revolt. The findings will be presented to the public during a conference called “New Studies in the Archaeology of Jerusalem and its Environs,” which will take place at the Hebrew University of Jerusalem to mark 50 years of archaeology since the unification of the city. (J.Post)

Bar Ilan researchers have announced a breakthrough medicine which attacks metastasized cancer growths. Prof. Uri Nir, of the Mina and Everard Goodman Faculty of Life Sciences at Bar-Ilan University, and his team have identified an enzyme that supports the survival and dissemination of metastatic cells, and developed a synthetic compound that targets the enzyme and kills the metastatic cells in mice with cancer. Their research has just been published in the journal Nature Communications. When leaving the primary tumor, cancer cells possess greater tools to survive in very harsh conditions, such as shortage of basic nutrients like glucose. Metastatic cells can safeguard against this metabolic deficiency by reprogramming their energy generation system. Prof. Nir and his team found the existence of an enzyme (FerT) in the mitochondria (an organ which generates energy within the cells) of cancer cells that they couldn't find in the mitochondria of normal cells. When they targeted the enzyme in the laboratory, the malignant cells failed to produce energy and died. (Arutz-7)

Israel’s Alon Day made local motor sport history on Sunday 15 Oct. 2017, clinching the NASCAR Whelen Euro Series championship in Zolder, Belgium. The 26-year-old ended his sensational season by winning the previous day’s race in Zolder and then settling for fourth on Sunday, knowing that he had already secured the title simply by completing the first lap. Day won four races in all this season, with Saturday’s victory being his third straight in the playoffs and the 10th in the CAAL Racing driver’s career. “It is such an amazing feeling,” said Day on Sunday after bringing CAAL Racing a first championship in its 41-year racing history. “Finishing the season like this is the sweetest thing I can ask. I am so happy for the CAAL Racing team, they did a great job all season long.” (J.Post)
JEWISH COACH LEADS COLOMBIA NATIONAL SOCCER TEAM INTO WORLD CUP: Led by its Jewish Argentine coach, Jose Pekerman, Colombia’s national soccer team will play in the 2018 World Cup in Russia. Colombia qualified for next year’s World Cup in Russia with a 1-1 draw against Peru last week in the final round of matches in the CONMEBOL South American group. Pekerman was born in Villa Dominguez in the Argentine countryside, one of the main centers of Jewish immigration to the country. Pekerman, a former midfielder with the Argentine national team, took over as Colombia’s coach in January 2012 and led Colombia’s return to the FIFA World Cup in 2014 following a 16-year absence from the world championships of soccer’s governing body. In June 2016 he led Colombia to a third place in the prestigious Copa America, held in the United States. Pekerman is the only Jewish member of a team participating in the FIFA World Cup for the second year in a row, albeit from the bench. (J.Post)

The United States government on Sunday 15 Oct. 2017, launched a $10 million project to improve access to wastewater treatment and water for Palestinian Arab farmers in the Jericho area. Greenblatt has been among Trump's aides seeking to restart Israeli-Palestinian Arab negotiations. USA officials have spoken of improving the Palestinian Authority's economy and infrastructure as part of their efforts. The project announced Sunday aims to increase the number of homes connected to the Jericho area's wastewater treatment plant previously built with Japanese assistance by about 10,000 residents. That would leave some 70% of Jericho residents connected. Recycled wastewater would then be available to Palestinian Arab farmers in the area, it said. Palestinian Water Authority chairman Mazen Ghunaim said "this project will have a positive and direct impact on creating jobs and economic growth." (Arutz-7)

A Syrian surface-to-air missile battery opened fire Monday morning, 16 Oct. 2017 on Israeli aircraft flying over southern Lebanon, an IDF spokesperson reported. In response to the attack, Israeli Air Force planes returned fire, destroying the surface-to-air missile battery which had attacked them. Israeli fighters dropped four bombs on the SA-5 missile battery According to the IDF, the Syrian missile battery opened fire on the IAF planes while they on a routine reconnaissance mission over southern Lebanon. Israeli officials say the IDF notified the Russian military regarding the air operation and engagement with the missile battery before IAF planes opened fire. No Israeli casualties were reported, and no IAF planes were damaged. "We hold the Syrian regime responsible for anti-aircraft fire and any attack originating from Syria," said IDF spokesperson Jonathan Conricus. (J.Post) Enemies Syria and Lebanon; terrorist group, Hezbollah, and a growing Iranian presence threaten Israel’s northern borders and the entire nation. Even single acts of military aggression on the part of these foes furthers an already explosive situation that could ignite another major war. Pray according to scripture:

‘THE PALESTINIAN AUTHORITY IS A TERRORIST ENTITY’:

Israeli politician Naftali Bennett called the Palestinian Authority a “terrorist entity” and declared that Israel must not negotiate with a joint PA-Hamas government. Dealing with the Israeli response to the internal reconciliation agreements between Hamas and the PA, Bennett said that “A Palestinian government that relies on Hamas has become a national terror government. Israel must not cave in and hold negotiations with it.” According to Bennett, “Hamas continues in these days to plan the murder of Israelis and to dig terror tunnels, and it sets in its mind’s eye the goal of destroying Israel. Hamas signed a reconciliation agreement with the PA with the goal of clearing itself and enjoying legitimacy, even as it grows stronger against us.” Bennett added that “The conclusion is clear: The PA is a terrorist entity. We must not negotiate with it, we must not grant it gestures until conditions are fulfilled: The return of Israeli citizens and the bodies of Israeli soldiers, the comprehensive dismantling of weapons and the adoption of the Quartet conditions.” (INN)

Hamas, the ruling terrorist group in the Gaza Strip has never once backed down from its policy of hatred and destruction of the Jewish state. Pray Israel will never be cornered into accepting this enemy in dialogues for peace. Pray also the Hamas terrorist group will continue to be boycotted by the UN until it renounces violence against Israel.

COURT FREEZES HALF A MILLION SHEKELS IN PA FUNDS:

​Israel's Law Enforcement and Collection System Authority recently issued a lien for 513,000 shekels ($146,900) belonging to the Palestinian Authority (PA). The lien is in response to the PA's refusal to work together with Israel to pay the legal fees after the Jerusalem District Court ruled that the PA tortured, jailed, and murdered PA residents accused of colluding with Israel. The document contained over two thousand pages detailing the torture which Arabs underwent at the hands of the PA, as well as the legal grounds upon which the ruling is based. " We are pleased with the results of the case, which garnish half a million shekels from the PA's money," the prosecutors' lawyer said. "We believe that the State of Israel will quickly implement the lien, expressing the Israeli government's commitment to help those who helped protect its sons from terror, death, and mourning - and paid not only with their health, but sometimes with their lives as well. There are others who are working now to prevent terror attacks, and they are looking to see whether the Israeli government is willing to stand by them if necessary.” (Arutz-7)