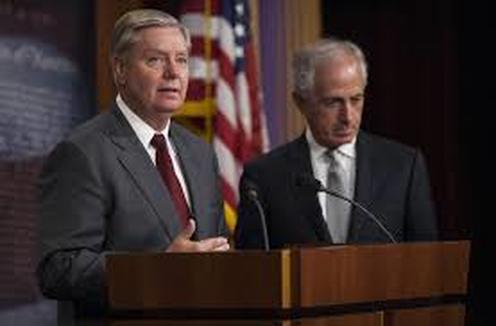 The USA Senate Foreign Relations Committee last week passed the Taylor Force Act. The bill passed the committee by a 17 to 4 vote and is designed to cut off aid to the Palestinian Authority until it ends its policy which distributes $300 million to terrorists and their families annually. The bill is named after Taylor Force, a former USA Army officer who was murdered in a stabbing attack in 2016, while walking along the Jaffa boardwalk. A recent report found that more than half of the PA's yearly budget goes to terrorists, and Brig. Gen. (Res.) Yossi Kuperwasser told the Knesset that the PA has dedicated more than $1 billion for such purposes in the last four years alone. During a recent meeting between President Donald Trump and Abbas in Washington, the president brought up the issue of the PA’s paying salaries to terrorists and their families. Later, leading Republican senators wrote a letter to Trump, urging him to demand that Abbas end his practice of paying terrorists and their families for attacks committed against Israel. (Arutz-7)

Jewish groups in the United States welcomed last week’s passing of the Taylor Force Act, which would cut USA funding to the Palestinian Authority until it stops payments to terrorists and their families. Leaders of the Conference of Presidents said, “The version of the Taylor Force Act, approved today by a significant bipartisan majority of the Senate Foreign Relations Committee, imposes meaningful consequences on the Palestinian Authority if it continues the practice of providing financial incentives to reward despicable acts of terrorism. For a governmental body to incentivize killings and provide rewards geared to the number of dead is an outrage that cannot be allowed to continue.” The Union of Orthodox Jewish Congregations of America, the nation’s largest Orthodox Jewish umbrella organization, also applauded the Senate Foreign Relations Committee . “This strong bipartisan vote by the Senate Foreign Relations Committee today moves toward ensuring that the USA will not tolerate – or pay for – violence and terrorism against Israelis, Americans and others,” said OU Advocacy Center Director Nathan Diament. (Arutz-7)

REPORT: TERROR ATTACKS BY ARAB CHILDREN ON THE RISE:

The number of terrorist attacks on Israelis by Arab children has greatly increased since the beginning of the so-called 'stabbing intifada' in September 2015. The report by UN watchdog Human Rights Voices (HVR) states that "there have been at least 79 separate terrorist attacks by Palestinian children since 13 September 2015." The attackers have been as young as eight. The report further noted that rather than act to prevent children from risking their lives in order to kill Jews, the Palestinian Authority has incited and encouraged its children to commit murder, in violation of international law. The report quotes PA UN representative Riyad Mansour's declaration in the public hall of the UN Headquarters on 23 Nov. 2015 as evidence of the PA's endorsement of child terrorism: “We are so proud that in this popular uprising that has started almost two months ago, that the backbone of this uprising are the youth of Palestine.” (Arutz-7)

Some 70% of Israelis favor giving the death penalty to Palestinian terrorists who murdered Israelis, according to the monthly Peace Index that was released 3 August 2017. The poll found that 69.8% of Israelis would support giving death sentences after a trial to Palestinians who murdered Israeli citizens for nationalistic reasons. The percentage saying they would oppose the death penalty was 25.3%, and 4.9% said they did not know. Likud MK Naava Boker proposed a bill last week that would allow giving the death penalty to terrorists sent by a terrorist organization who murder at least two people. "The murderers of the Fogel family in Itamar currently live in a four-star hotel in an Israeli prison," Boker said. "The recent murders of border policemen on the Temple Mount and the Solomon family in Halamish require taking stricter measures. Enacting a death penalty for terrorists, along with other measures, could restore deterrence and help stop terror in Israel." (J.Post)

Talla Fall, of Senegal, and Amara Camara, of Guinea, are scheduled to present their respective letters of credence to Israel's President Reuven Rivlin on Tues. 8 August 2017 at a ceremony in Jerusalem, officially taking up their positions as non-resident ambassadors to Israel. Fall, who also represents Dakar in Egypt, will be based in Cairo. Camara will work out of Paris. Guinea and Senegal - both Muslim-majority nations in West Africa - have recently upgraded their relations with Israel. While both countries had existing diplomatic ties with the Jewish state, neither has ever appointed an ambassador to Israel. (Times of Israel)

A team of Israeli and American researchers has identified the single gene mutation which causes a rare neurological disorder in children. The disorder causes neurological degeneration and developmental regression in apparently healthy children, beginning between the ages of 3 to 6. These patients gradually lose motor, cognitive, and speech functions, becoming fully dependent on caregivers between 15 and 20 years of age. The results of the research were published last week in The American Journal of Human Genetics. In the study, the root of this yet-unnamed neurological disorder was found to be in a single spontaneously occurring (not inherited) gene mutation, and was shown to be caused by ribosomal RNA flooding patients' bodies. No cure has yet been found, but identifying the mutation is a breakthrough which may allow preventive therapies and treatment later on. (Arutz-7)

The Israel Aerospace Industries (IAI) has recently completed the development of the Counter Improvised Explosive Device and Mine Suite (CIMS) mobile system, integrating optic sensors with radars to expose roadside charges before military forces ever go near them. This new Israeli innovation will be able to protect soldiers against explosive charges as they cross hostile areas in times of battle or operations. The system is mainly designed to be used by patrol forces undertaking routine security measures near the borders such as route openings and suspicious object inspections. In addition, the system can also assist armored and motorized infantry forces' land maneuvers. The new hardware may be installed on a variety of vehicles, from hummers and soft defenders intended for routine patrol tasks, through gunfire-protected vehicles and ending with armored vehicles such as tanks. (Ynet)