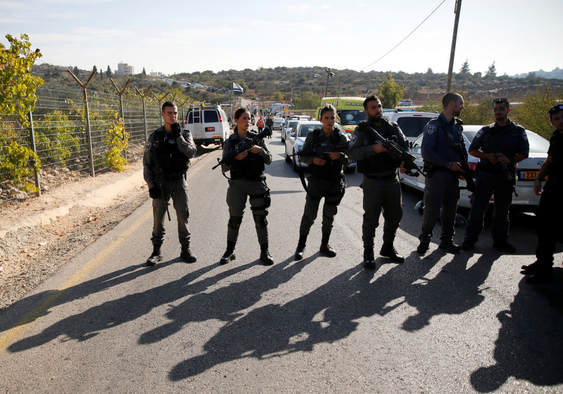 A terrorist shot and killed a Border Policeman and two civilian security guards and seriously wounded another Israeli near the settlement of Har Adar in the Jerusalem area on Tues. morning 26 Sept. 2017. The terrorist was shot and killed by security forces. Magen David Adom paramedics treated three fatally wounded members of the Israeli security forces in their twenties and thirties, but had to pronounce them dead at the scene. Another 32-year-old man was seriously wounded and taken to the Hadassah Medical Center in Jerusalem. Doctors said his injuries were not life threatening. The attack took place while a security force was opening the settlement's peripheral traffic route. (Arutz-7)
Our hearts go out to those who have lost loved ones in this brutal terrorist attack. Please pray for their comforting and for the quick recovery of the man who is recovering from his wounds. The second new ambulance that VFI donated to Israel via Magen David Adom was on the scene being used at Har Adar yesterday morning.

Iran tested a new ballistic missile that is capable of carrying multiple warheads, the nation's state-run broadcaster announced Saturday, 23 Sept. 2017. Iran unveiled the ballistic missile the previous day at a military parade in Tehran and successfully tested it the same day, Press TV reported. The report also said Iran released footage of the test-launch. Called the Khorramshahr missile, the weapon has a range of 1,250 miles (2,000 kilometers) and can carry multiple warheads. "The Khorramshahr missile has become smaller in size and more tactical and it will be operational in the near future," the broadcaster said. The missile was launched from an unknown location. With the claimed range, the missile would be easily capable of reaching Israel and Saudi Arabia. Iranian President Hassan Rouhani said Tehran would press ahead with strengthening its missile capabilities and military defenses. Iran and North Korea are also actively coordinating on nuclear development and sharing technology. Therefore, the crisis on the Korean Peninsula and Iranian actions are closely linked. (Arutz-7/Washington Times)

Iran’s provocative actions have threatened the free world, Defense Minister Avigdor Liberman said 23 Sept. 2017, after Tehran announced it had tested a ballistic missile with multiple warheads capable of hitting Israel. “This Iranian missile launch is an act of provocation and defiance against the United States and its allies, as well as an attempt to test them,” Liberman said, adding that it “is also further proof of Iranian aspirations to become a world power that threatens not only the Middle East, but all the countries of the free world.” He warned against the day when such a ballistic missile carries a nuclear warhead. “Imagine what would happen if Iran would obtain nuclear weapons, something which it strives to do. We must not allow this to happen,” said Liberman.

The new ballistic missile has a range of 2,000 km, (1,250 miles). The distance by air between Tehran and Tel Aviv is 1585 km. (985 miles). Iran said Saturday it would keep developing its arsenal, despite USA pressure to stop. The United States has imposed unilateral sanctions on Iran, saying its missile tests violate a UN resolution that calls on Tehran not to undertake activities related to missiles capable of delivering nuclear weapons. Iran says it has no such plans. However Iran said in its announcement on Saturday that the Khorramshahr missile could carry several warheads. State broadcaster IRIB carried footage of the missile test. It included a video from an on-board camera that showed the detachment of the cone that carries multiple warheads. Britain also voiced concerns about the latest test. “Extremely concerned by reports of Iran missile test, which is inconsistent with UN resolution 2231. Call on Iran to halt provocative acts,” British Foreign Secretary Boris Johnson wrote on Twitter. Likewise, France said on 23 Sept. 2017, it was extremely concerned by Iran's ballistic missile test and called on UN Secretary-General Antonio Guterres to carry out a full report on the launch. (J.Post/INN/Ynet)

TRUMP ON IRAN: NOT MUCH OF AN AGREEMENT:

USA President Donald Trump blasted Iran on Saturday 23 Sept. 2017 over its latest ballistic missile test. "Iran just test-fired a Ballistic Missile capable of reaching Israel. They are also working with North Korea. Not much of an agreement we have!" he tweeted. The test comes just weeks before Trump is due to update Congress whether Iran is in compliance with the nuclear deal it signed with world powers in 2015. Should Trump say that Iran is not in compliance with the deal, Congress would have 60 days to decide whether to reimpose sanctions waived under the deal. The President has long been a vocal critic of the Iranian nuclear deal, and he repeated his criticism of the deal in his speech at the UN General Assembly this past week. Trump called the deal "an embarrassment" to the USA and "one of worst and most one-sided transactions the United States has ever entered into." Speaking to reporters last week Trump said he has reached a decision on whether to recertify Iran's compliance with the 2015 nuclear deal, but would not reveal that decision. The deadline to make the announcement is 15 Oct. 2017. (INN)

HAZAN: NUCLEAR IRAN IS NO LESS A THREAT THAN THE HOLOCAUST:

MK Oren Hazan a member of the Foreign Affairs and Defense Committee, has demanded that the chairman of the committee convene an urgent discussion on the Iranian threat. "The world’s silence vis-a-vis the Iranians is reminiscent of the world’s silence in the face of North Korea's nuclear bullying, which led to a situation in which they now have nuclear weapons that they can use at any moment - and I do not rule out that this will happen soon. “As far as Israel is concerned, the launching of the missile by the Iranians after President Trump's clear words points a finger at the president of the United States, the free world, and especially Israel, and serves as a clear warning that the Iranian hourglass is running out,” Hazan said. "We, as a country with a small territory, do not have the ability to absorb an atomic bomb and continue to exist. It is an existential and tangible danger to the Jewish people no less than the Holocaust. The only difference between World War II and today is that, now, we have the ability to prevent it. “Therefore, it is Israel's duty to inform the entire world, and the Iranians in particular, that a state that calls for the destruction of the State of Israel and is acting accordingly will be answered accordingly. It must be clearly stated that any offensive Iranian action against Israel will be met with the destruction of Tehran, and that is what must be done." (Arutz-7)

NUMEROLOGIST: DOOMSDAY NOT ON SATURDAY AFTER ALL:

The end is still nigh - just not as nigh as it was earlier this week, a Doomsday writer says. David Meade, who made widespread claims the world was to have ended on Saturday 23 Sept. 2017, when a mysterious planet was to have collided with Earth, is now backtracking on the calamitous claim. Meade said the world won’t end on 23 Sept. after all, but instead Saturday will only mark the beginning of a series of catastrophic events to occur over several weeks. “The world is not ending, but the world as we know it is ending,” he told news sources. “A major part of the world will not be the same the beginning of Oct. 2017.” Meade said his prediction is based on verses and numerical codes found in the Bible, specifically in the apocalyptic Book of Revelation. He said recent events, such as the solar eclipse and Hurricanes Irma and Harvey, are omens of the approaching apocalypse. Meade’s prediction has been dismissed by people of faith including the Roman Catholic and Protestant branches of Christianity. Ed Stetzer, a professor and executive director of Wheaton College’s Billy Graham Center for Evangelism, slammed Meade’s theory on Friday, 22 Sept. 2017 calling it “fake news” and asked Christians to be critical. “It’s simply fake news that a lot of Christians believe the world will end on 23 Sept 1017, Stetzer wrote in Christianity Today. “Yet, it is still a reminder that we need to think critically about all the news.” (Fox)

DISABLED PROTESTERS BLOCK CENTRAL ISRAELI HIGHWAY:
​
Disabled protesters blocked Tel Aviv's Ayalon Highway at Keren Kayemet LeYisrael junction as part of their ongoing campaign for higher stipends, distributing leaflets and delaying drivers heading to work after Israel's Rosh Hashanah (Jewish New Year) holiday. Disabled Israelis have been blocking off major thoroughfares in recent weeks as part of their campaign to raise the monthly stipends they receive from the National Insurance Institute from NIS 2,342 ($660) to the minimum wage of NIS 5,000 ($1,400). Last week they blocked off the entrance to Ben-Gurion Airport, a major highway in Haifa, and at the entrance to Jerusalem. The Knesset interrupted their summer recess to hold a special debate on the issue last week. A wide range of MK's have called for the government to pass legislation that would improve the monthly payouts the disabled receive. Health Minister Yaakov Litzman (UTJ) announced that he intended to advance moves that raise monthly stipends to NIS 3,200, and NIS 4,000 in extreme cases, and to dedicate NIS 4 billion to the issue. The Histadrut, Israel's largest labor union, announced on Sunday 24 Sept. 2017 that they are embarking on a campaign in support of the disabled, which will include taking out ads in Israel's major news outlets. (INN)