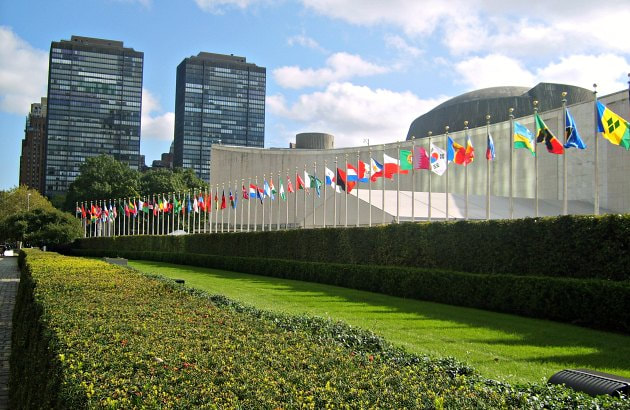 Over a dozen ambassadors to the United Nations wished the people of Israel a Happy New Year in a video on Wed. 20 Sept. 2017, the eve of the Jewish New Year. Israeli Ambassador to the UN Danny Danon started off his holiday message saying that Israel has "many friends around the world," that want to wish the Jewish country a happy new year. Danon added that these people are "true allies that support the State of Israel here in the UN." The video featured a message by USA Ambassador to the UN Nikki Haley wishing Jews around the globe "all the best, in health, happiness and peace." Greeting from countries Germany, Hungary, Albania, India, Argentina, Australia, Rwanda, Mexico, the UK, Singapore, Estonia, Uruguay and Togo were also showcased in the video. (J.Post)

NETANYAHU AT UN: AN UNLEASHED IRAN WILL BECOME THE NEXT NORTH KOREA:

During his speech to the UN General Assembly Tues. 19 Sept. 2017, PM Benjamin Netanyahu warned of a "vast Islamist Iranian empire" if the Iranian nuclear deal is not fixed or nixed. "Every day, Iran is conducting a campaign of conquest across the Middle East and developing ballistic missiles to threaten the entire world," he said. He compared Iran's quest to become a nuclear power with that of North Korea, whose leader USA President Donald Trump referred to as "rocket man" earlier in the day. "There are those who still defend the dangerous Iranian nuclear deal, arguing that it will block Iran's path to the bomb. That's exactly what they said about the nuclear deal with North Korea, and we all know how that turned out. If nothing changes, this deal with turn out exactly the same way," he said. Netanyahu had a simple message for Iran's supreme leader: "The light of Israel will never be extinguished." He also repeatedly praised Trump's leadership and commitment to standing at Israel's side. "The remarkable alliance between the USA and Israel has never been stronger or deeper," he said. "Israel is deeply grateful for the support of the Trump administration, the USA Congress and the American people." The prime minister also vowed to prevent Iran from gaining a foothold in Syria and along Israel's northern border. (J.Post)

SHMULEY BOTEACH: TRUMP’S SPEECH ONE OF ‘MOST FORCEFUL’ AT THE UN:

Popular American rabbi and author, Rabbi Shmuley Boteach spoke on 19 Sept. 2017 to Israeli media sources about USA President Trump and Israeli PM Netanyahu's speeches at the UN General Assembly. "President Trump's speech was one of the most forceful delivered at the UN podium," Boteach said. "It focused on good and evil and was morally unambiguous. It stated clearly that Iran, North Korea, Venezuela - these are rogue regimes, terrorist-sponsoring regimes, regimes that brutalize their people." Trump, Boteach added, said clearly what the nuclear agreement is: "It's an embarrassment to the United States, who has agreed to pay $150 billion to a terrorist-sponsoring regime, and to believe them about not building a nuclear arsenal," said Boteach. He also noted that Trump's speech is incredibly important to Israel. "The whole problem with the UN and its relationship with Israel is the UN has no morality. It's become a moral farce because it just focuses on condemning Israel while it overlooks the most egregious human rights violations all over the world," he explained. "The president is saying that the United States is going to demand that the UN be a moral body. That's what Israel needs. the more the UN stands up for morality and righteousness, the more Israel will be praised, the more Israel will be protected." (Arutz -7)

Israel intercepted an Iranian-built drone that penetrated into Israeli airspace from Syria on Tues. 19 Sept. 2017. IDF Spokesman Brig.-Gen. Ronen Manelis said the Hizbullah-operated, intelligence-gathering drone took off from Damascus International Airport and was intercepted by a Patriot missile. "The IDF will not allow any infiltration or attempt to infiltrate Israeli airspace by any Iranian terror group, be it Hizbullah or Shia militia groups. We will respond to every action very clearly and we will act to prevent any future attempt," he said. (J.Post)

The head of Poland's governing right-wing party on 18 Sept. 2017 denounced anti-Semitism and hailed Israel at a ceremony honoring Poles who rescued Jews during the Holocaust. Jaroslaw Kaczynski, widely regarded as Poland's de facto decision-maker, made the comment after the European Jewish Congress (EJC) voiced "grave concerns" over an increase in anti-Semitic acts under the government of Kaczynski's Law and Justice (PiS) party. Condemning anti-Semitism as being "very dangerous", Kaczynski called Israel a great state. “We see the proof somewhere above us where there is a supreme force, a divine force, which decides everything and without it, Israel could not exist, it is a kind of miracle of our time," he added. Poland was once home to Europe's largest Jewish population, numbering around three million people, or 10 percent of the Polish population in 1939. Only about 300,000 survived World War II after Nazi Germany occupied Poland and set up the death camp Auschwitz-Birkenau on its territory. Last month, a leader of the Polish Jewish community urged the ruling party to help fight anti-Semitism, saying Polish Jews had reached a “low point” in their feeling of security. (Arutz-7)

Jewish schools in Mexico City are preparing to provide aid to victims of Tuesday's 19 Sept. 2017 earthquake, said Mexico's World Bnei Akiva representative. At least 224 people were killed in the quake, which measured 7.1 on the Richter scale. World Bnei Akiva representative Shmuel Ben-Adiva was in Mexico City's Jewish school when the earthquake struck. "It was a really strong earthquake, and everyone who was in the building went outside," Ben-Adiva said. All of the phone lines collapsed. Now, the Jewish community is beginning to collect food and supplies for those in need. The community synagogue was severely damaged. The day before Rosh Hashana (Jewish New Year), its facade collapsed completely. "All of the Jewish schools, like all the other government schools, will be closed tomorrow. The Jewish schools are beginning to organize to aid the rest of the country. Tomorrow morning the Jewish schools will turn into temporary 'war rooms' to organize aid for all areas affected by the earthquake - and there were a lot of them." PM Netanyahu ordered that assistance and a search and rescue operation be organized and leave for Mexico as soon as possible. (INN)

The IDF is clamping down on smoking and will stop selling cigarettes at 56 open bases across the country beginning on 1 Nov. 2017. Brig.-Gen. Meirav Kirshner explained that over 2.5 million cigarettes and other tobacco products are sold each year in Shekem stores on IDF bases. MK Tamar Zandberg chairman of the Knesset Committee on Drug and Alcohol Abuse, said, “Cigarettes, which until now were a mandatory item in Shekem stores, will now be removed, which may be unpopular but is extremely important.” As part of the new guidelines, every soldier will also be able to participate in programs aimed at helping them quit smoking. The IDF will open a database of all smokers in the army and every new conscript will be asked on his first day at the induction center if he smokes. "To the chief of staff, smoking has a negative effect on the army. It affects the soldiers' fitness; smokers take more sick days,” Kirschner said, stressing that these new guidelines are “only about the health of the soldiers.” (J.Post)

BIRDERS SET RECORD BY SPOTTING 181 DIFFERENT SPECIES IN THE HULA VALLEY IN 24 HOURS:
​
The annual Champions of the Flyway bird-watching competition attracted contestants from around the world. Bird was indeed the word this week in Israel's Hula Valley. That's because the Champions of the Flyway birding competition took place in the avian paradise, which sees some 400 species of birds pass through each year. European bee-eaters, black-crowned night herons, spotted eagles and an assortment of other beautiful birds were spotted by teams that came from around the world to raise money for bird conservation. The winners of this year's international contest, The Arctic Redpolls, who hailed from Finland, broke an all-time record, spotting 181 species. But not to be outdone, the winners of the domestic competition,The Wallcreepers, spotted the same number. (Grapevine)