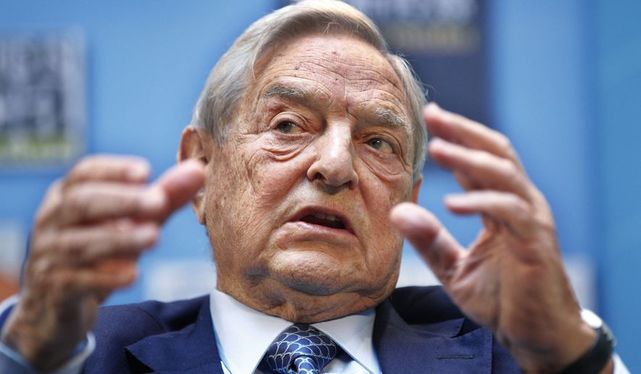 A petition asking the White House to declare liberal mega-donor George Soros a domestic terrorist has garnered over 100,000 signatures, or more than enough to necessitate a response from the Trump administration. The petition was posted on the “We the People” section of the White House website 20 Aug. 2017, and needed to crack the 100,000-signature threshold within 30 days to trigger an official response. As of early Saturday afternoon 2 Sep. 2017, it’s been digitally signed over 110,000 times. “George Soros has willfully and on an ongoing basis attempted to destabilize and otherwise commit acts of sedition against the United States and its citizens,” the petition states. "Through creating and funding organizations exclusively devoted to facilitating “the collapse of the systems and Constitutional government of the United States” Mr. Soros “has developed unhealthy and undue influence over the entire Democrat Party and a large portion of the USA Federal government,” according to the petitioners, and “the DOJ should immediately declare George Soros and all of his organizations and staff members to be domestic terrorists.” Mr. Soros, 87, is a Hungarian-born billionaire and businessman who widely known for funding liberal advocacy groups and organizations, both domestic endeavors as well as initiatives abroad. He supported Mr. Trump’s rival during the 2016 race, Democratic candidate Hillary Clinton. (Washington Times)

The Trump Administration is increasing pressure on the United Nations to prevent its publishing a blacklist of companies that do business in Judea, Samaria, the Golan Heights, and eastern Jerusalem. USA Ambassador to the UN Nikky Haley conveyed messages through diplomatic channels to senior UN officials to the effect that the USA will cut all funding to the UN Human Rights Council if the blacklist the UNHRC drafted is published. Ambassador Hailey also threatened that the USA would leave the council altogether if the blacklist was published. Israel’s ambassador to the UN, Danny Danon, blasted the blacklist as "an expression of modern anti-Semitism that reminds us of dark periods in history. Instead of focusing on the terrible humanitarian problems plaguing the globe, the Human Rights Commissioner is seeking to harm Israel, and in doing so has become the world’s most senior BDS activist. I call on the UN, and the international community as a whole, to halt this dangerous policy and put an end to this anti-Israel initiative," Danon said. (INN)
More voices of protest are being raised on behalf of Israel, and ever-increasing action is being taken against global organizations and groups who further anti-Israel bias and Anti-Semitism. This is an answer to prayer.

TRUMP PEACE ENVOY CALLS FOR THE PA TO RE-TAKE CONTROL OF GAZA:

Hamas has failed as governors of the Gaza Strip and the Palestinian Authority should take over according to President Donald Trump’s foreign negotiations chief. Jason Greenblatt, one of the trio of Israeli-Palestinian negotiators headed by Trump son-in-law Jared Kushner, remained in Israel after the official visit by the team last week. On 30 Aug. 2017, Greenblatt toured the Israeli side of the Gaza border and concluded that “the Palestinian Authority needs to resume its role in the administration of Gaza, as Hamas has substantially harmed the people of Gaza and has failed to meet their most basic needs.” The PA did control Gaza until Hamas violently took control away from the PA and Fatah in 2007. Greenblatt’s comment was the first by a senior USA official affirmatively calling for the PA to take control.

Visiting UN Secretary General Antonio Guterres also viewed the Israeli side of the border but via helicopter. During the helicopter trip from Jerusalem to Gaza, Guterres received a special briefing on security issues in southern Israel. He then visited a Hamas terror tunnel and met with residents of the border communities.“Hamas continues to arm itself in order to harm Israel as it exploits the generous humanitarian aid provided by the international community,” Ambassador Danon told the Secretary General. “Hamas has turned the residents of Gaza into hostages and is investing its resources into digging murderous terror tunnels. At the same time, the Israeli residents of the border communities have stood strong in the face of terror threats, as they build prosperous communities and help further develop the region for the betterment of the next generation.” (Medialine/INN)

IRAN: OUR MILITARY SITES ARE OFF LIMITS:

Iran on Tues. 29 August 2017, dismissed a USA demand for United Nations nuclear inspectors to visit its military bases as “merely a dream.” The USA ambassador to the United Nations, Nikki Haley, recently asked the International Atomic Energy Agency (IAEA) to seek access to Iranian military bases to ensure that they were not concealing activities banned by the 2015 nuclear deal reached between Iran and six major powers. Iranian government spokesman Mohammad Baqer Nobakht rejected the demand on state television last week. “Iran’s military sites are off limits. All information about these sites is classified. Iran will never allow such visits. Don’t pay attention to such remarks that are only a dream.” USA President Trump has been a vocal critic of the Iran nuclear deal, which was signed during the term of the Obama administration, describing it as “the worst deal I’ve ever seen negotiated”. The USA continues to maintain sanctions on Iran that are related to its ballistic missile tests. Rouhani recently threatened that Iran would walk out on the nuclear deal if the United States continued to apply fresh sanctions. (Reuters)

The Defense Ministry body responsible for authorizing construction of Israeli settlements in Judea & Samaria will be advancing plans for some 3,000 new housing units in September 2017. Included in the plans set to be advanced by the Civil Administration are 700 housing units in Ariel, 260 and 97 units in the northern Judea & Samaria settlements of Tzofim and Rechalim, respectively, 86 units in the Binyamin region’s Migron, and 192 in the South Hebron Hills’ Negohot, the report said. The Defense Ministry body, which has already approved 3,400 housing units this year, will reportedly also work to shorten the planning process for the settlements. Much of the international community views settlements as illegal and an obstacle to peace with the Palestinians. (Times of Israel)

ISRAEL LAUNCHING $20 MILLION PROGRAM TO TEACH SCHOOLKIDS BETTER ENGLISH:
​
Israel will spend nearly $20 million on a new program to improve the English skills of its schoolchildren. At a news conference on 30 August 2017, Education Minister Naftali Bennett said that not knowing how to speak English well is hurting Israelis in business and in life. The plan will enable the hiring of 1,000 teachers who are fluent in English. Israeli students start learning English in the third grade. The focus will be on speaking the language. More classes will be dedicated to verbal skills, and matriculation exams will include more verbal testing. “We want to see children who are able to engage in an intelligent conversation anywhere in the world, who are able to correspond via email at a high standard, who can consume literature at the highest level,” Bennett said at the news conference. (JTA)

The number of Indian tourists visiting Israel is said to be surging following PM Narendra Modi’s visit to the Jewish state earlier this summer. An Israeli tourism official, during a recent visit to the subcontinent stated his country was hoping to welcome 100,000 tourists from India next year. Modi’s July trip to Israel, Hassan Madah - the director of the Israeli Tourism Ministry’s India section - noted, delivered a “positive message.” According to Madah, 44,672 Indians traveled to Israel in 2016 and the number for 2017 is expected to rise to around 55,000. Ties between the two countries have flourished in recent years and Modi’s tour of Israel was the first ever by a sitting Indian prime minister. (Algemeiner) “Your gates will always stand open - they will never be shut, day or night.” Is 60:11

ISRAELI DOCTORS SUCCESSFULLY OPERATE ON GAZA ‘TREE MAN”:
​
Doctors at Jerusalem’s Hadassah Medical Center successfully operated on a Palestinian man from the Gaza Strip suffering from a rare disease known as “tree man syndrome.” Mohammed Taluli, 42, arrived at the hospital with large, bark-like growths on his hand, caused by complications from human papillomavirus infection, which can be cancerous. Dr. Michael Chernofsky, an orthopedist and hand specialist operated on Taluli. Chernofsky said the surgery was successful and that Taluli is now receiving medications and vaccines to complete the treatment. Taluli said he sought treatment for his rare condition at hospitals in both Egypt and Judea & Samaria, but was unable to find a cure until the Palestinian Authority coordinated his treatment in Israel. “After years in which I sat at home embarrassed and could not work because of the limitation and feared cancer, the experts here at Hadassah were the only ones who gave me hope,” Taluli said. “The treatment here is excellent and it is possible to say that everything is good today; the team here is very nice and helps a lot,” he added. “I really hope that my past life is already behind me to see my family, my wife and my six kids.” (Times of Israel)